By Xia Guobei and Leng Cheng 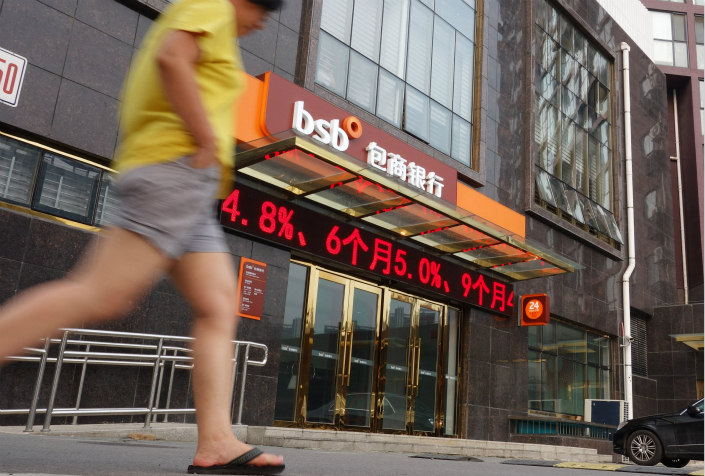 A pedestrian walks in front of a Baoshang Bank branch in Beijing in August 2013. Photo: IC

The secretive Tomorrow Holdings Group continues to unload assets, Caixin has learned, with the company planning to sell around half of its stake in Baoshang Bank Co. as the country tightens its grip on private financial firms that have turned the sector into something of a Wild West.

Tomorrow Holdings plans to sell up to 30% of the bank to Shenzhen Investment Holdings Co., an arm of the city’s state-owned assets supervision and administration commission. Tomorrow Holdings holds at least a 70% stake in Baoshang Bank through various subsidiaries, sources told Caixin.

The deal, which is likely to be valued at more than 18 billion yuan ($2.8 billion) based on the bank’s market capitalization, will make Shenzhen Investment Holdings the controlling shareholder of Baoshang Bank, Caixin has learned.

The planned sale is the fourth offloading plan considered by the Tomorrow Holdings in just six months, as it has been caught up in a Beijing-led cleanup campaign targeting financial conglomerates and trying to reduce systematic financial risk. The group has also quickened the pace at which it is selling its stakes in financial firms since its 47-year-old boss, Xiao Jianhua, reportedly began assisting authorities with unspecified investigations in January 2017.

Tomorrow Holdings tried to sell its stake in the Chongqing-based New China Trust Co. for about 22 billion yuan in May. In April, an open filing showed the group made an urgent agreement to sell all of its shares in the Guangdong-based Lianxun Securities Co. Just three months earlier, it agreed to sell a substantial stake in Hong Kong-listed Hengtou Securities Co. Ltd. for 9 billion yuan.

Among the financial firms controlled by Tomorrow Holdings, Baoshang Bank, a small lender based in the industrial city of Baotou in the Inner Mongolia Autonomous Region, is considered to have a particularly close relationship with the group. It had been thought that finding a buyer would be difficult, sources told Caixin. “Baoshang Bank doesn’t function normally as a financial institution. It’s a cash machine for Tomorrow Holdings,” a source familiar with the bank told Caixin.

The source said that Baoshang Bank helped Tomorrow Holdings put together no less than 150 billion yuan of funding through shadowy practices, including loans packaged as wealth management products, interbank lending that finally went to the group’s subsidiaries, and funding obtained by using the group’s stake in Baoshang Bank as collateral.

The bank’s asset quality and business operations have deteriorated sharply in recent years, as Baoshang Bank failed to develop profitable businesses. The lender’s net profits slumped by 13.9% year-on-year to 3.1 billion yuan as of the end of September, with its nonperforming loan ratio rising to 1.68% as of the end 2016 from 1.41% at the end 2015.

The lender didn’t disclose its latest bad loan figure in 2017 and said it would delay the release of its annual report, which was originally scheduled for May. Dagong Global Credit Rating Co. downgraded the lender’s outlook to negative from stable in October, citing the rapid decline of its capital adequacy and mounting nonperforming loans. Caixin learned that Baoshang Bank sought to go public years ago, but its financial statement never met the listing requirements set by the securities regulator.

Sources told Caixin that the Baotou government tried to acquire the lender, but failed to reach an agreement with Tomorrow Holdings due to a lack of funds. One of the country’s biggest asset management companies, China Huarong Asset Management Co., also tried to acquire the group’s stake. However the talks were abandoned as Huarong’s Chairman and Communist Party Chief Lai Xiaomin has been under investigation for “serious violations of party discipline and law” since April.

The deal offered by Shenzhen Investment Holdings sprung from the city government’s ambition to develop the company into a state-owned financial conglomerate with full financial operation licenses, sources said, explaining that Baoshang could have provided the company with a banking license. But questions remain about whether Baoshang Bank would be a good choice for Shenzhen Investment Holdings.