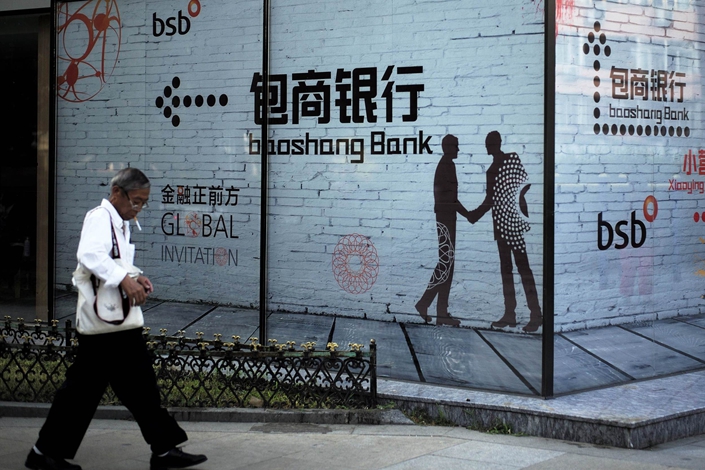 An advertisement in Beijing for Baoshang Bank on Sept. 8. Photo: VCG

China’s financial regulators will guarantee at least 70% of the funds owed to corporate depositors and certain creditors of a bank that has become the first private lender in China to be directly taken over in 20 years, sources told Caixin.

The People’s Bank of China and the China Banking and Insurance Regulatory Commission said in a statement Friday that they were taking over Baoshang Bank, which has links to fallen tycoon Xiao Jianhua’s conglomerate Tomorrow Holdings, for one year. The regulators said they were concerned about Baoshang’s “severe credit risk.”

The regulators also said in another statement (link in Chinese) on Sunday that all of Baoshang’s corporate deposits and interbank debts of up to 50 million yuan would be guaranteed. For those worth more than 50 million yuan, the takeover team will negotiate with creditors for further protection, according to the statement.

Caixin has learned from multiple sources that the takeover team and the state-owned China Construction Bank — which was entrusted to run Baoshang Bank’s business — have been negotiating with creditors with deposits worth more than 50 million yuan. In the preliminary phase, the bank will likely repay corporate creditors at least 80% of their deposits, and other financial institutional creditors at least 70%. Creditors will be able to seek compensation under the law for the remainder, the sources said.

In addition, Caixin has learned from multiple bankers that Baoshang Bank has halted its trading in pledge-style repurchase agreements and negotiable certificates of deposit (NCD) — a popular interbank lending tool — to prevent other institutions from panicking and making a run on the bank. The Beijing branch of the China Securities Regulatory Commission has also asked other financial institutions to check if they hold Baoshang Bank assets, and if so, how much, multiple sources in the finance industry told Caixin.