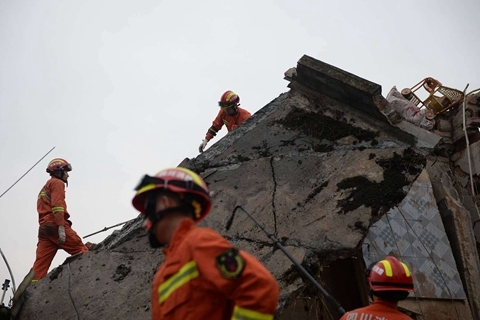 How do you predict an earthquake?

Wang Tun knows, and he’s spent a decade spearheading Chinese efforts to give residents an early warning for the devastating tremors.

Thanks to his and others’ work, residents of Sichuan and Yunnan provinces were given between 10 to 60 seconds lead-time before a 6.0-magnitude quake hit their areas Monday night.

At least thirteen people died in that disaster, and 200 were injured. It’s not known how many were saved by the alert system, but a minute is a lifetime when seconds matter.

Wang heads the Chengdu Hi-Tech Disaster Reduction Institute, which he founded after returning from studying in the U.S. and seeing an earthquake devastate Sichuan province in 2008.

Here’s how the warning system works, which Wang says covers 60% of people in earthquake-prone zones:

Instruments in areas with high seismic activity detect energy radiating from an earthquake. The energy travels faster that the actual seismic activity, so it gives monitors time to send out warning messages — which are sent to people’s phones and TVs.

As a scientist, Wang likes to boil down how many seconds may save how many lives. And there is room for improvement in detecting the incoming quakes.

But the bigger point, he says, is getting the warnings transmitted to everyone within quake-prone zones.