World Bank: Managing the Risks of the Belt and Road

By Martin Raiser and Michele Ruta 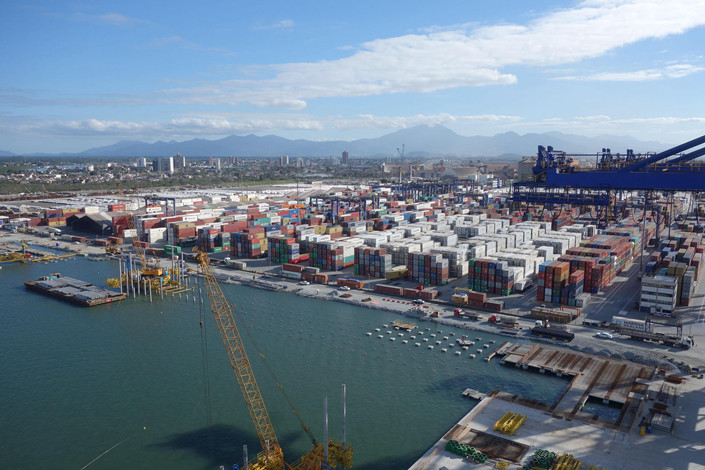 A container yard at in the Port of Paranaguá, Brazil, which was purchased by a Hong Kong company last year. August 27, 2018. Photo: VCG

China’s signature foreign policy project, the Belt and Road Initiative (BRI), has seen many successes. Over 125 countries have signed up, and projects are being implemented across Asia, Europe, Africa and beyond. In April, the 2nd Belt and Road Forum reaffirmed the government’s commitment to the initiative, as well as its desire to address the unique challenges inherent in large, cross-border infrastructure.

But largely absent from the discussion so far is hard evidence of what the Belt and Road can — and cannot — do to improve trade, increase incomes, and reduce poverty. Also missing is a careful assessment of the risks that these projects might entail. In the absence of empirical analysis, the initiative has attracted the greatest attention from its most ardent supporters and vociferous critics.

Quantifying impacts for the Belt and Road is a major challenge, given the initiative’s size and scope and limited data available. When infrastructure crosses borders, the benefits from increased connectivity are magnified — but so are the risks. That is why the World Bank has spent the last two years studying Belt and Road transport projects through empirical research, economic modeling, and rigorous evaluation.

Our aim has been to provide countries an independent analysis of the risks and opportunities of Belt and Road transport corridors. This will allow all participants, including China, to choose the kinds of investments and reforms that will best meet their development needs. The study also aims to inform the public debates surrounding the Belt and Road, by grounding the discussion in data and analysis.

Belt and Road transport corridors will help in two critical ways: by lowering travel times and by increasing trade and integration. Along the corridors, transit times are expected to decline by up to 12%. This matters: one day less in transit would increase trade by 5.2%. Transit times are also estimated to decrease by an average of 3% with the rest of the world, showing that even countries that don’t participate in the Belt and Road will benefit from roads, rails, and ports built in corridor economies.

We estimate trade could grow from between 2.8 and 9.7% for Belt and Road corridor economies, and between 1.7 and 6.2% for the world. Not all countries would see positive trade effects, but aggregate effects would be positive — because all countries would experience a decline in trade costs. Sectors that are time-sensitive (such as fresh fruits and vegetables) or require time-sensitive inputs (such as electronics and chemicals) will benefit the most. Low-income countries could see a 7.6% increase in FDI.

But even though the total economic impacts would be positive, gains would be unevenly distributed. In Kyrgyzstan, Pakistan, and Thailand, real income gains could be above 8%. But for Azerbaijan, Mongolia, and Tajikistan, the high costs of infrastructure could exceed the gains from greater connectivity and economic integration, in the absence of other reforms.

Complementary policy reforms are essential for countries to unlock Belt and Road benefits. Participating countries will need to make it easier to import and export goods. Real incomes for Belt and Road corridor economies could be two to four times larger if trade facilitation is improved and trade restrictions are reduced. In addition, countries will need to strengthen investment protection and improve the environment for private sector participation.

Policy reforms will also be necessary to mitigate the considerable risks associated with large infrastructure projects. About one-quarter of Belt and Road corridor economies already have high debt levels — and for a handful of these economies, our analysis shows that medium-term vulnerabilities could increase. Even for countries without high debt levels, the tradeoffs of a Belt and Road investment must be considered carefully. Projects should be consistent with national development priorities. The value of individual transportation projects depends on realizing others. And where benefits of transport investments would accrue mostly to neighboring countries looking to transit, these neighbors could be asked to shoulder the risk, for instance through public-private partnership.

Large infrastructure projects create governance risks, including corruption and failures in public procurement. The limited data available indicate that Chinese firms account for the majority of Belt and Road contracts — according to one estimate, more than 60% of Chinese-funded Belt and Road projects are allocated to Chinese companies. Little is known about the processes for selecting firms. Moving toward international good practices such as open and transparent public procurement would increase the odds that Belt and Road projects are allocated to the firms best placed to implement them.

Environmental and social risks also must be considered. Many Belt and Road routes pass through areas vulnerable to degradation, flooding, and landslides. Belt and Road transport infrastructure is estimated to increase carbon dioxide emissions by 0.3% worldwide — but by 7% or more in Cambodia, Kyrgyzstan, and Laos as production expands in sectors with higher emissions.

Enacting the necessary reforms will not be easy. Reforms to open trade and reduce delays at the border will require dealing with vested interests. Managing fiscal risks will require improvements in data reporting and transparency, which depend on better coordination among government bodies, lending institutions, private sector firms, and state-owned enterprises (SOEs) in China.

China is well-positioned to facilitate these reforms. It has vast experience building large-scale infrastructure projects. It has grappled with formidable obstacles in project financing, community engagement, and coordination issues. Today, it is sharing these experiences with other Belt and Road participants. China also announced a series of initiatives at the Belt and Road Forum in April to improve transparency, combat corruption, and address environmental concerns.

These are important steps. But bolder and deeper policy reforms will be required for the ambitions of the Belt and Road to be realized and its risks mitigated. Three core principles must be upheld:

Country-specific reforms: Making it easier to import and export goods is essential for countries to reap the benefits of Belt and Road investments. In addition, countries should adopt open procurement processes, strengthen governance, and establish fiscal and debt-sustainability frameworks that allow them to fully account for the costs of debt-financed infrastructure.

The Belt and Road represents an enormous opportunity — particularly for countries that have long been at the periphery of the world economy. It should not be squandered.

Martin Raiser is the World Bank Country Director for China, and Michele Ruta is the lead author of the World Bank’s study “Belt and Road Economics.”