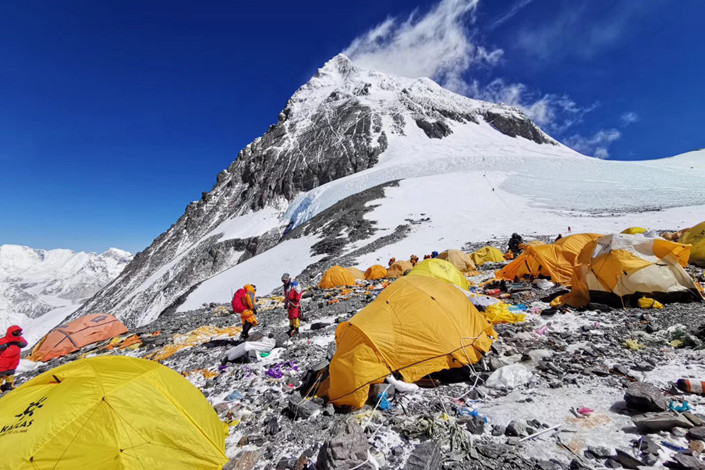 Climbers set up camp on Mount Everest on May 26. Photo: IC Photo

Like many others, I was shocked by recent images showing the size of the queue that formed in May to scale Mount Everest, the world’s highest peak, from the Nepalese side. The idea that delays caused by overcrowding may be partly to blame for some of the 11 reported deaths on the mountain during this year’s climbing season is horrific to consider.

About a decade ago, my wife and I trudged the path from Lukla, Nepal, toward the Everest Base Camp, so I have some feel for the attraction of such adventures. But, along with the excitement, I remember feeling disappointed at the sheer number of people undertaking the trek. The initial intrigue was gone, and we saw little point in continuing the struggle just to wait in line. We reversed course at the last stop before Base Camp. (For any aspiring trekkers, I would recommend the underappreciated route up to Nepal’s Gokyo Lakes, which was much less crowded, and had equally splendid views.)

Beyond specific conditions such as the narrowness of the trail, Everest’s overcrowding problem is not so different from many other economic and social challenges that policymakers confront, namely an imbalance between supply and demand, and possibly poor regulation. One example, of special concern to me, is the market for antibiotics, which is failing because the development of new drugs is not keeping pace with demand. But more closely related to Everest is the broader challenge of managing tourist hotspots. Around the world, more and more people have joined the middle class, and they (understandably) want to experience the best that the planet has to offer.

When it comes to Everest, part of the problem is a fixed supply. There are only so many paths up the mountain (though some daring alpinists, no doubt, prefer to blaze their own), but the number of tour groups has increased. Given this, it stands to reason that the price should be allowed to rise until the balance between supply and demand is restored.

Of course, Nepalese policymakers, eager for tourism revenue, would balk at this suggestion; and they would probably argue that the average visitor should not be turned away from such a massive natural attraction. But, in that case, they must introduce and enforce stricter safety and regulatory standards for the companies offering tours up the mountain (which will also put upward pressure on prices).

The same fixed-supply problem applies to all tourist hotspots. As I have noted previously, Switzerland would have to produce more beautiful mountains to have any hope of satisfying the burgeoning demand from Chinese tourists visiting the Alps. The same can be said of Petra, Jordan, or any other wonderful destination. In all of these cases, the rational economic solution is to allow the price to rise, or to introduce more stringent regulatory controls.

When it comes to the market for antibiotics, many in the pharmaceutical industry would offer the same remedy. If the price of antibiotics (especially those for treating “gram-negative” bacterial infections) were considerably higher, the inappropriately high demand for such drugs would fall, and companies would have an incentive to re-enter the risky business of researching, developing, and gaining approval for urgently needed drugs.

When compared to the Everest dilemma, this argument makes sense. The problem is that life-saving drugs are not the same thing as adventures and vacations. While imposing a much higher cost might solve the problem in wealthy societies, it would compound the problem of access across vast parts of the emerging world. In many parts of Africa, the Indian subcontinent, and beyond, paying higher prices is not an option. To prevent the emergence of antimicrobial-resistant (AMR) bugs that could threaten the entire world, these societies need to be able to manage and prevent infectious diseases effectively and responsibly.

After leading the British government’s independent Review on AMR in 2014-2016, I have continued to call for a large “market-entry reward” to encourage drugmakers to pursue the development of new antibiotics. But this measure alone will not suffice. As the Everest problem shows, we also need policy initiatives to limit inappropriate usage, which will require more investment in diagnostics. With the right policies in place, pharmaceutical companies could charge higher prices for necessary new drugs, but those drugs would be administered only in cases deemed appropriate by improved diagnostic tools.

Come to think of it, perhaps the Nepalese authorities should introduce a diagnostic technique at their check-in sites, in order to test the preparedness of aspiring summiteers. Not only would that deter those who cannot judge for themselves; it would also save lives.