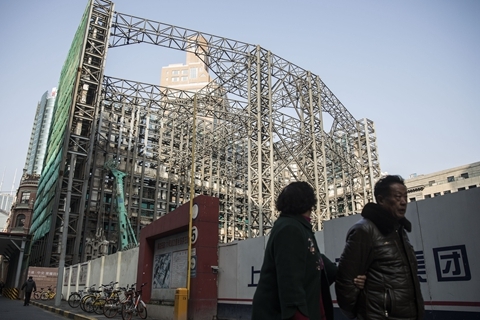 A total of 18 Chinese real estate companies issued bonds so far in June, of which 11 sold or planned to sell bonds overseas with a total estimated issuance of more $3 billion. That compares with only two offshore bond offerings by domestic developers in May, according to a report by property consultancy China Real Estate Information Corp. (CRIC).

Policies may tighten further as CBIRC Chairman Guo Shuqing at a financial forum last week warned against speculation in the property sector.

Borrowing abroad is doubling the financing costs of some developers. Jiangsu Zhongnan Construction Group Co. last week issued $350 million of offshore bonds at a 10.875% coupon rate. China South City Holdings sold $60 million of U.S. dollar senior notes at a rate of 11.875%. Zhenro Group issued $200 million of U.S. dollar perpetual bonds at a rate of 10.25%. By contrast, onshore bond borrowing costs were less than 5% in March, according a report by Centaline Property Agency.

“For developers, how to get funds to maintain their growth is their top priority,” CRIC said in the report. “In this context, they have to pay a higher cost to seek financing overseas.”

The CRIC report projected that the proportion of foreign debt issuance by developers and financing costs would continue rising. How to seek further breakthroughs in financing channels and effectively reduce leverage will be the main challenges Chinese developers face, the report said.