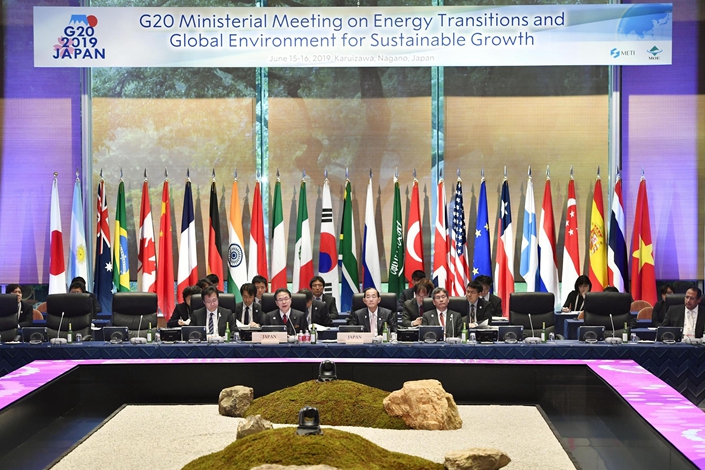 Energy and environment ministers from member countries of the Group of 20 meet in Karuizawa, Japan, on June 15. Photo: VCG

As the Group of 20 (G-20) Summit in Osaka, Japan approaches, global governance is at a crossroads.

As the main forum for global economic cooperation, the G-20, which grew out of the Asian financial turmoil in the late 1990s, thrived during the 2008 global financial crisis. Over the last 13 summits, the forum has broken through the initial stages of global economic cooperation and has become the main forum for global governance in the post-financial crisis era. Taking the upcoming Osaka Summit as an example, the organizers have planned to discuss eight major issues: the global economy, trade and investment, innovation, energy and the environment, employment, women’s empowerment, development and health. These issues cover almost all of the current topics of global governance.

Though global governance has made progress periodically, it is often at a loss. In recent years, the anti-globalization trend characterized by unilateralism has become more and more intense. As the summit’s agenda for trade and investment says, the rules-based multilateral trading system is at a critical crossroads. Similarly, global governance of climate change and technological innovation — both related to the well-being of humankind — has hit rough waters. The “withdrawal” and “cold war” in science and technology has cast a heavy shadow on the prospects for sharing achievements in scientific research and coping with global challenges in the 21st century.

Around this series of disputes, there are enormous differences in understanding between different countries, involving profound adjustments of internal and external interests. It is impossible to have an easy solution. On the other hand, the governance mechanisms of globalization are in crisis. What should be done? First of all, we must establish the criteria for judging right and wrong. That is, we must clarify the rules on which global governance is based. These rules must be free and open, embrace globalization and be conducive to fair competition — they cannot be closed, unilateral or embrace narrow nationalism.

It should be said that the greatest expectations for the Osaka Summit are around the meeting of the leaders of China and the United States. While the global economy has basically emerged from the gloom of the global financial crisis and made a sustained recovery, trade frictions between China and the U.S. have become the biggest uncertainties. After the sharp turn in Sino-U.S. trade negotiations, the meeting of the heads of state is a rare opportunity to break the deadlock. If Sino-U.S. trade negotiations are allowed to break down and the technology and humanities systems are gradually decoupled, the main problems remain unsolved, even if other aspects of the global governance system can be patched up. In other words, the speedy arrival of a trade agreement between China and the United States has become a necessary condition for improving the global governance system.

As the main source of global economic growth and job creation, trade and investment are not only the core components of globalization, but are also the key links of global governance. The multilateral mechanism represented by the World Trade Organization (WTO) is facing its most severe challenges since its establishment. Some even assert that “the WTO is dead.” The three major functions of the WTO — formulating multilateral trade rules, establishing a platform for multilateral trade negotiations, and providing dispute settlement mechanisms — all require urgent restoration and improvements. The most urgent is reform to the dispute settlement mechanisms. The United States frequently imposes punitive unilateral tariffs on grounds of national security and obstructs the appointment of members to the WTO’s Appellate Body, which may paralyze the organization’s arbitration mechanisms through the end of the year.

In addition, due to the years-long stalemate of the “Doha Round,” the WTO has basically lost its function as a negotiating platform for trade liberalization, and thorny issues such as subsidies for state-owned enterprises and digital trade cannot be solved. Countries must find new ways, such as regional multilateral trade liberalization agreements like the Comprehensive and Progressive Agreement for Trans-Pacific Partnership (CPTPP) and bilateral trade agreements like the EU-Japan Trade Agreement. Although this trend is one way to explore the next steps for global governance, it will inevitably lead to the temporary fragmentation of global trade and investment.

In view of this, countries at last year’s G20 summit in Buenos Aires, Argentina, supported the necessary reform of the WTO and agreed to review its progress during the Osaka Summit. On May 13, China formally submitted its reform proposal to the WTO. China advocates for “tackling the essential and pressing issues threatening the existence of the organization, increasing WTO relevance on global economic governance, improving the organization’s operating efficiency and increasing the inclusiveness of the multilateral trade mechanism.” This fully demonstrates China’s determination to safeguard the global multilateral trading system with the WTO at its core.

The Chinese government has repeatedly expressed its willingness to shoulder international responsibilities commensurate with its strength and capabilities. This is a desirable attitude. This not only demonstrates China’s sincerity in promoting global governance and exerts pressure on unilateralism in individual countries, but also serves China’s own interests. For example, China has always stressed the importance of abiding by the Paris Agreement. Energy conservation and emissions reduction are also urgent needs for China to protect its own environment and upgrade its industrial sector. The principle of competition neutrality and strengthening the protection of intellectual property rights are more important in the reform of China’s system and the transformation of its growth mode. It is both reasonable and advantageous to abide by endogenous motivation and bravely take on international responsibilities.

The improvement of the global governance system depends on all stakeholders working together.

We regret to see that both “extreme pressure” and “extreme resistance” have appeared in international consultations. However, many issues have been dragged out, and when this happens no one wins. Negotiations should be problem-oriented, not just endless diplomatic rhetoric. With the deepening of the global governance crisis, the world has become more and more aware of what is right and wrong. If we blindly insist on our own “minor principles” and delay the improvement of global governance, we cannot escape the weight of historical responsibility.