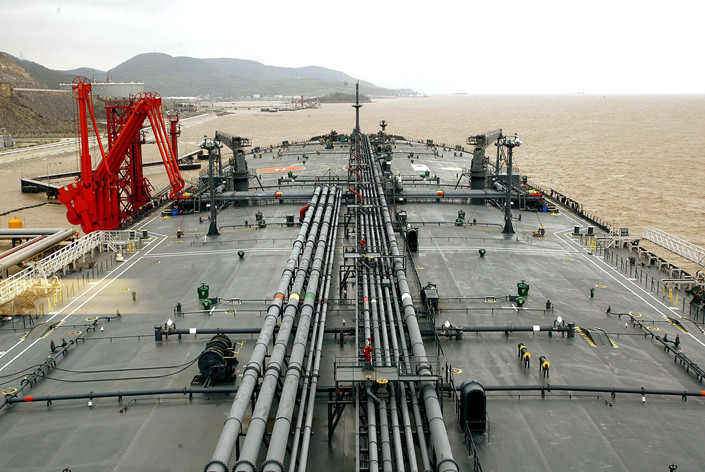 Imported crude oil gets offloaded at a terminal at the port of Ningbo in eastern China on Jan. 9. Photo: VCG

(Bloomberg) — Oil-hungry refiners across China ramped up purchases of U.S. crude in May amid an erosion of supplies from sanctions-hit Iran and Venezuela, even as trade tensions rage on between Beijing and Washington.

China imported 786,638 tons of U.S. crude oil in May, the equivalent of 186,000 barrels a day, the most since September, data released by the General Administration of Customs show. Shipments in May from Iran fell two-thirds from the month before to the lowest level since October 2018, while receipts of Venezuela crude more than halved from April.

American oil exporters are emerging as the beneficiary of global supply disruptions and a collective output-curb decision by OPEC and its allies, with sales to Chinese customers surging 65% from the previous month. Buyers across the world’s top oil importer have shrugged off their earlier reluctance to purchase oil over concerns of possible tariffs as they seek a diversity of supplies and cheaper oil.

“It’s quite natural that the U.S. would step in to fill the supply gap of Iran and Venezuela given its output has been rising,” said Sophie Shi, an analyst with IHS Markit. It makes economic sense to import more oil from the U.S. as the arbitrage is open, she added.

At least 6 million barrels of U.S. crude set off for Chinese refineries in May, according to ship tracking data compiled by Bloomberg. In June, American shipments to the Asian nation are expected to reach at least 4 million barrels, according to shipping reports and data from Kpler. West Texas Intermediate crude sold for almost $9 per barrel less than the global benchmark Brent in May, compared to about $6 in April.

Observed crude flows from Iran dropped to 190,000 barrels a day in the first half of June, less than a tenth of the volume shipped in early 2018, according to tanker-tracking data compiled by Bloomberg. Asia’s top buyers including China had skipped purchase of Iranian oil loading in May, Bloomberg reported in April, citing people with knowledge of the matter.

“As for Iran, the sanctions in theory would apply to cargoes that were loaded after May 2, so we should really be looking out for June-arrival volumes,” Shi said.

Russia was the top supplier to China in May, shipping 6.36 million tons of crude while Saudi Arabia was the second largest, exporting 4.7 million tons.