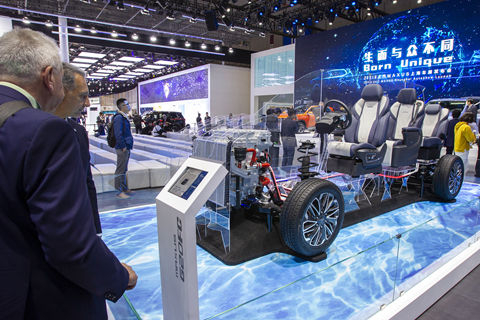 China aims to cumulatively deliver 1 million hydrogen-fueled cell cars by 2030, according to an industrial development agenda. But Ouyang Minggao, an academician at the Chinese Academy of Sciences, believes this might be a crush.

The goal will likely be met between 2030 and 2035, a few years later than the original schedule, said Ouyang during the World New Energy Vehicle Congress in Hainan earlier this week.

While the supply of hydrogen and the underlying hydrogen fuel cell technology are not major hindrances to long-term development, as domestic technology will mature soon, Ouyang noted that expenses on in-car hydrogen storage containers — the costliest among all power components — have posed unexpected challenges. This obstacle will also affect the construction of hydrogen stations — whose shortage will fail to serve fast-growing demands, Ouyang said.

A source familiar with the issue, who wished to stay anonymous due to the sensitivity of the issue, said to Caixin that China still relies on the imports of such vehicles’ key hydrogen storage equipment, which would boost related costs.

China currently has around 3,000 hydrogen fuel cell cars in pilot operation. Ouyang believes that China’s goal to have at least 50,000 hydrogen-powered vehicles by 2025 remains practical.