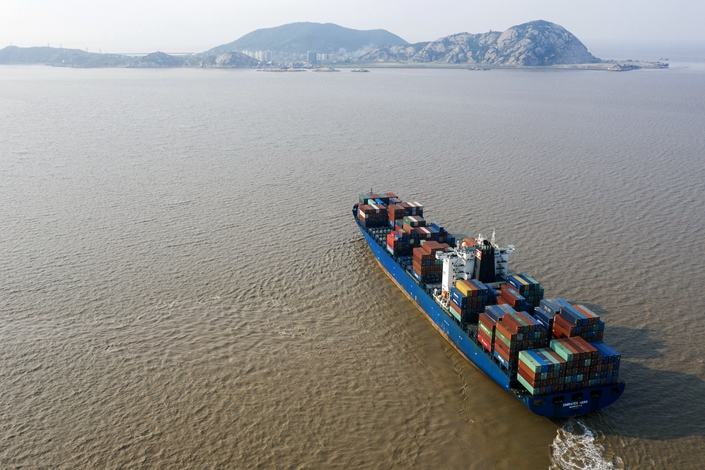 Dealmakers say trade tensions between the U.S. and China, which have brought rising tariffs, have clearly affected the pace of acquisitions. Photo: Bloomberg

(Bloomberg) — Closing Chinese outbound deals was already a difficult task. Growing trade tensions globally has made it even tougher.

At $35 billion, the volume of Chinese outbound mergers and acquisitions is the lowest tally for the first six months of the year since 2013, according to data compiled by Bloomberg. The total represents a 75% drop from the peak of such M&A activity in the first half of 2016, when China National Chemical Corp. agreed to buy Swiss agrochemical maker Syngenta AG for $43 billion.

Of the first-half total, only $6.8 billion was from U.S. acquisitions, representing a 17% drop from a year earlier. Among those deals, Chinese buyout firm Hony Capital Ltd. was part of a consortium that invested $700 million in U.S. filmmaker STX Entertainment, the data show.

Dealmakers say that trade tensions between the U.S. and China, which have led to rising tariffs on both countries’ goods, have clearly affected the pace of acquisitions.

“The trade war sentiment continues to weigh on overall outbound China M&A activity, and we expect this to particularly impact China-U.S. deals in the near future,” said Joseph Gallagher, head of Asia-Pacific mergers and acquisitions at Credit Suisse Group AG.

And even though deal volumes have been falling for several years, “the recent escalation of trade tensions has probably accelerated the slowdown,” said Iain Drayton, Goldman Sachs Group Inc.’s co-chief operating officer for investment banking in Asia excluding Japan.

Global uncertainty goes beyond the U.S.-China trade war. Regulators including the Committee on Foreign Investment in the U.S., or CFIUS, and the European Commission have adopted a tougher stance in reviewing such sectors as technology and infrastructure, making it more difficult to complete transactions.

More than 40% of the China outbound transactions in the first half of the year took place within the region, the Bloomberg-compiled data show. The biggest occurred in April, when a China-backed group agreed to invest $5.4 billion in Mindanao Islamic Telephone Co., or Mislatel, the Philippines’ third telecommunications provider.

The volume of Chinese cross-border deals has steadily fallen since 2016, not only as a consequence of tighter scrutiny from the U.S. and Europe. The splashy acquisitions by Chinese groups such as Dalian Wanda Group Co., Anbang Insurance Group Co. and HNA Group Co. were followed by a Chinese government crackdown on foreign investments.

Companies have also faced setbacks when investing in certain sectors in Australia, according to Rohit Chatterji, co-head of Asia-Pacific M&A at JPMorgan Chase & Co. That said, they are still looking for acquisitions both domestically and in some overseas markets, Chatterji said.

“Japan, Korea, India and Southeast Asia have been very busy in M&A and are poised to remain active in the coming months,” he said.

Yet the Asia-Pacific region has seen a sharp decline in deal activity in the first half of the year, with volumes dropping more than 30% from a year earlier, Bloomberg-compiled data show.

Southeast Asia has been one of the few bright spots for M&A as companies not only from China but globally seek to tap into the economic growth potential of Vietnam, Indonesia and the Philippines, according to Paul DiGiacomo, senior managing director at financial advisory firm BDA Partners.

The biggest deal in the region so far this year is Blackstone Group’s $18.7 billion purchase of U.S. logistics properties from Singapore’s GLP Pte. Others include Telenor ASA’s talks with Axiata Group Bhd. to combine their Asian telecommunication operations.

Another source of deals has come from global companies reviewing their Asian footprint. France’s Carrefour SA agreed to sell an 80% stake in its China unit for 4.8 billion yuan ($698 million) in cash to local retailer Suning.com Co. German retailer Metro AG has been considering a sale of a majority stake in its Chinese business, people familiar with the matter have said. And Anheuser-Busch InBev NV, the world’s largest brewer, this week started taking orders for an initial public offering of its Asian operations, in what could be the biggest listing this year.

That’s not enough to offset the drop in volumes, however. The Chinese M&A market must materially recover for the region to show continued growth, said Mayooran Elalingam, head of Asia Pacific M&A at Deutsche Bank AG.

“China will continue to be challenged due to a multitude of factors, including the trade war, SOE reorganization, capital controls and general tightness in financing from local institutions,” he said.