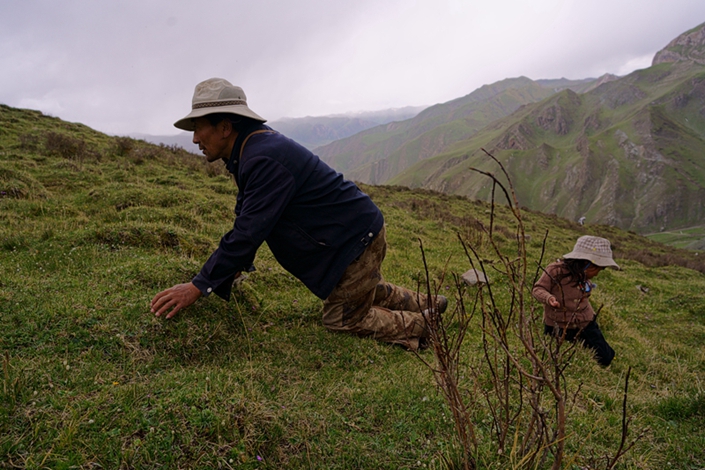 1. In the mountains behind Gyana in Qinghai province, Sonam Chimey and his 4-year-old daughter climb to 4,500 meters to search for cordyceps on June 9. This morning, they have found none, and they must climb higher. The fungus is getting harder and harder to find. Photo: Guo Xianzhong/Caixin

Every year from January to late May, many places in Tibetan regions are empty.

Everyone flocks to the mountains to dig up a fungus that can determine a family’s standard of living for the next year.

The fungus known as cordyceps is a parasitic fungus that grows on insects such as caterpillars. Cordyceps is believed by some to have medicinal qualities and is used in traditional Chinese medicine. Because it must be hand-collected and is only found in high-altitude meadows, it is quite valuable.

Sonam Chimey and his family set off before dawn, their bellies full of yak butter tea and their backpacks filled with the yak jerky that will serve as their fuel for the day. His village is a place called Gyana in Northwest China’s Qinghai province, famous for having the world’s largest collections of mani stones — stones carved with a particular Buddhist mantra.

But the quality of the caterpillar fungus found on the other side of the mountain is of outstanding quality. When the price was high, Sonam’s family could get rich off of it. “When it was at its most expensive, a normal-sized (piece) would cost 60 yuan ($8.70) or 70 yuan,” he said, “Now it would only sell for 25 yuan.” He is not only worried about the sharp drop in price. This year, there was a shortage in the cordyceps caterpillar fungus — “not even half of last year” — which forced him to cut much of his planned spending for the year.

Passing through the cordyceps checkpoint at the entrance of the village, a smiling face emerged, a village cadre, who greeted Sonam and invited him in for tea. At this time, he was not in the mood — everyone was rushing to the top of the mountain. Compared with those who pitch tents on the mountain, rushing back and forth to the village wastes too much time — but it makes life much easier when it snows or rains.

But there are many who are not afraid of suffering.

At the gate of the checkpoint, there is a sign with 51 photographs on it — those from the village who have paid the “camping fee.” They are mainly from other places and are Tibetan or Han — the country’s majority ethnic group. Because of the drop in output, the fee has dropped from 3,000 yuan last year to 2,000 yuan this year, but it is still a hefty investment. During the collecting season, people can earn about 100 yuan per day in a month. Sonam and his family tend to earn less than this per day, but those who camp still may end up losing money. Most of them live in the mountains, leaving early and returning back late, not daring to waste even a small amount of time in the 10 to 15 days they spend on the mountain collecting the fungus.

On his way up the mountain, Sonam’s youngest daughter keeps pestering him, dragging him behind and stopping walking. By the afternoon, they had only reached an altitude of 4,500 meters (14,760 feet). After half a day, they had found nothing. The cold rain began to fall again, and his daughter began crying. He lifted her onto his back and kept walking.

The cordyceps market is bustling with businessmen from all over the country. Besides the herdsmen who sell cordyceps, there are also women who brush the fungus for 0.15 yuan per piece. They are meticulous and barely have time for a sip of water, as if they are on an assembly line. The businessmen who run the stores are hidden behind them, incessantly contacting customers in the provincial capital Xining or even further afield, calculating how much money is flowing in and out.

A man named Phurbu Tsering is the elder of this market, and he has witnessed the ups and downs of the price of cordyceps for more than a decade. “Now it’s at its lowest,” he said. “But no matter the price we can still earn money. What’s most worrying is the annual decline in production.” He did not know the reason why. “This year there may be only half of last year’s production,” he said.

Outside the door, the herdsman who have already sold the cordyceps they collected disperse with rolls of money of varying thickness. Some invite friends for a drink to reward their days of hard work. Some shake their heads and return straight to the mountains. The cordyceps season ends on June 25, only days away. The motorcycles disappeared between the hills, and it began to snow again.