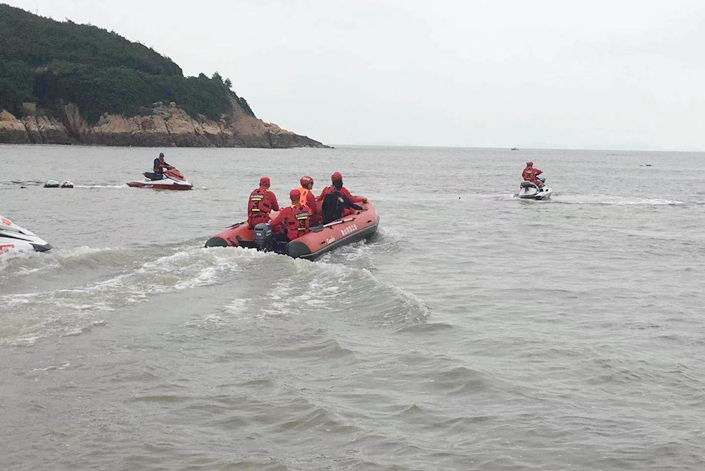 Zhang Zixin's father and others search for the missing girl along the coast of Ningbo, East China's Zhejiang province, on July 11. Her body was found in the area two days later. Photo: IC Photo

Zhang Zixin was taken away from her grandparents’ home on the outskirts of Hangzhou on July 4 by two tenants living at the family’s property, according to a statement by local authorities (link in Chinese) Sunday. The tenants, a man surnamed Liang and a woman surnamed Xie, had claimed they wanted to take the girl to a wedding in Shanghai.

But, investigators found, Liang and Xie took Zhang to several southern Chinese cities before returning to Ningbo in Zhejiang, where security video footage showed that Liang and Xie killed themselves on July 8 by jumping into a lake. On the same day, Zhang’s grandmother reported the disappearance of her granddaughter. Zhang’s body was eventually found in the sea off the coast of Ningbo on Saturday.

Liang and Xie were suspected of killing Zhang, who appeared to have drowned, police said in an interview with official public security newspaper Peace Times.

It’s unclear what Liang and Xie’s motives were, although the two suspects, who were in a relationship, had on multiple occasions asked if they could adopt Zhang as a goddaughter. According to police, Liang had previously married and had two children, who lived in a different part of the country.

Over the past two years, Liang and Xie depended on lying to friends and relatives to obtain money to travel, the police said, though by the time they died the two had only a combined 31.7 yuan ($4.60) in cash and their bank accounts. The pair had traveled to at least 48 cities across China since the end of 2018.

Zhang’s parents were separated and lived in other cities, placing her in the care of her elderly grandparents. Zhang’s father told the Beijing News (link in Chinese) that Liang and Xie had deceived the child’s grandparents and convinced them to agree to let Zhang accompany them on their trip, despite the grandparents’ initial reluctance.