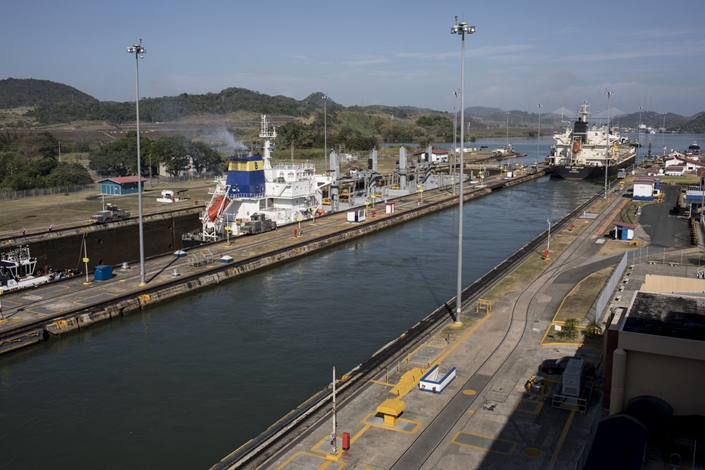 Low water levels caused by a drought this year have forced the Panama Canal's authority to restrict the size of vessels allowed to cross the new set of locks. Photo: Bloomberg

(Bloomberg) — The trade tension between the U.S. and China is making waves at the Panama Canal.

Cargo from the U.S. to China going through the key waterway has slumped this year as the Asian giant cuts its imports of American food and fuel, according to Panama Canal Authority CEO Jorge Luis Quijano.

Amid the dispute, Japan has displaced China as the canal’s second-largest user, while U.S. businesses remain the canal’s biggest customers, he said.

U.S. President Donald Trump complained this week that China hasn’t increased its purchases of American farm products, a promise he said he secured last month at a meeting with President Xi Jinping. China is relying more on countries such as Qatar, and Trinidad and Tobago, for liquefied natural gas (LNG), and Brazil for soy, according to Quijano.

“This is a bigger disadvantage to the U.S., because China just buys the same products elsewhere,” Quijano said.

The canal forecasts revenue of $3.2 billion this fiscal year, up 2% from 2018. That would have been higher without the trade dispute, which cut traffic from the U.S. to China by about 8 million tons since the current fiscal year started in October, according to Quijano. Traffic through the canal on the most important route, from the East Coast of the U.S. to Asia, was 78 million tons in the 2018 fiscal year.

Despite this, Moody’s Investors Service this year upgraded the canal’s credit rating to A1, from A2, citing its strong financial performance since the expansion, and low debt levels.

Quijano said the U.S-China dispute could cost the canal more money if tensions continue. At the same time, it may get a boost from new LNG terminals scheduled to come online in the coming months in the U.S. states of Georgia and Texas, which will help supply growing demand from Japan and South Korea, he said.

Low water levels caused by a drought this year forced the canal authority to restrict the size of vessels allowed to cross the new set of locks. A draft restriction of 44 feet that mainly affects container ships will likely remain in effect for the coming weeks until rainfall picks up, Quijano said.

The canal has studied the possibility of building an additional set of locks for even bigger ships, but demand isn’t likely to merit such an undertaking in the next 10 to 15 years, he said.