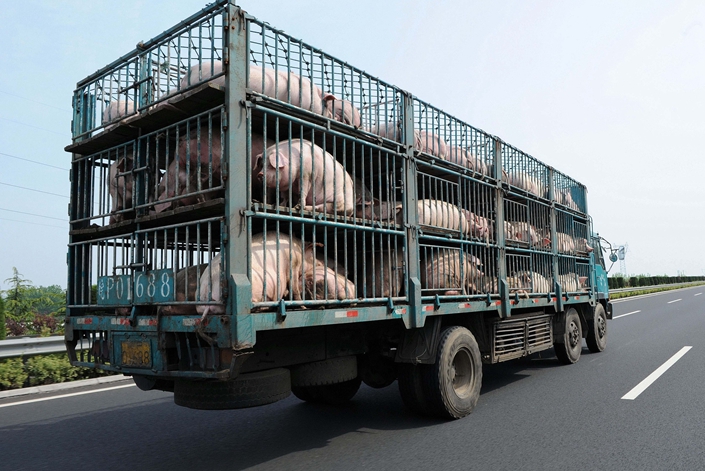 A pig transport on an expressway in Jiangsu province, on April 28. Photo: VCG

“One hundred percent” of pigs traveling between provinces will be inspected for five major viruses including African swine fever, China’s Ministry of Agriculture and Rural Affairs announced on Thursday.

African swine fever is a disease that has decimated China’s pork industry. The first case was reported in Northeast China’s Liaoning province in August 2018 and it has since been reported in all of China’s provincial-level regions. The virus doesn’t seem to affect humans, but is highly contagious among swine and kills almost every hog that contracts it. There is no vaccine or cure.

The announcement posted to the agricultural ministry’s website states that quarantine certificates for pigs that are to be transferred to other provinces will be issued “only when the risk assessment meets the requirements.”

Investigations into the handling of the ASF outbreak, including by Caixin, found that local governments were issuing the certificates to pigs that could have been exposed to the virus.

After the pigs have been transferred to a different province, the local animal health supervision agencies should supervise the owners of breeding pigs to implement prevention and quarantine measures, the ministry said.

The notice posted on the ministry’s website also states that in laboratory tests for African swine fever, which has resulted in the culling of more than one million pigs in China, blood samples can be mixed depending on the number of pigs being tested. It requires that “isolation observation measures” should be taken before the samples are taken for testing and before pigs are transferred. The bulletin extends the detection time to seven days before the pigs are transferred.

One veterinary expert told Caixin that mixing samples will reduce the detection rate but that “taking charge of detection now has no significance.” Instead, “the current focus should be shifted to reducing the amount the virus is spread in the environment.” The virus can survive on soil for months and in a frozen environment for several years.