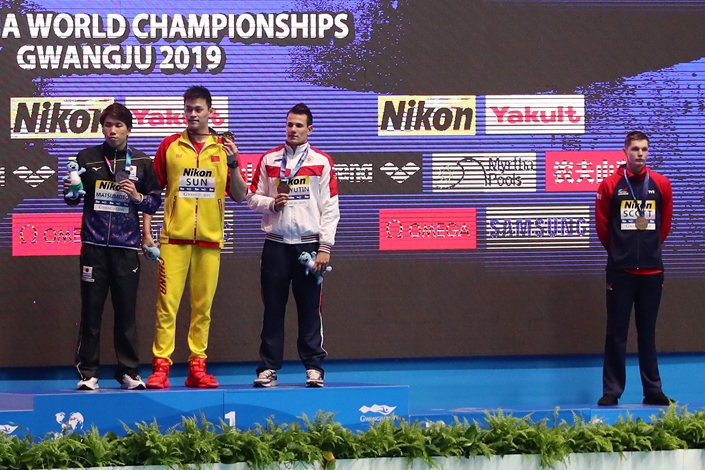 This refusal of two swimmers to acknowledge the achievements of star Chinese swimmer Sun Yang at this week’s 2019 World Aquatics Championships in South Korea has sparked outrage among a portion of China’s public.

Sun, who had just won the 200-meter freestyle event, appeared to be upset that British swimmer and co-bronze medalist, Duncan Scott, refused to shake his hand or pose for photos with him.

As they left the podium, Sun got in Scott’s face and appeared to be saying “I win. I win. You lose,” as they exited the area, according to media reports.

That episode came two day after Australian swimmer and Olympic gold medalist, Mack Horton, refused to share the podium with Sun. Horton, who once accused Sun of being a “drug cheat,” finished second in the 400-meter freestyle, while Sun took first place.

Millions of Chinese internet users directed their fury at the refusal, accusing Horton of being “envious” and “disrespectful to China” on China’s Twitter-like social media platform Weibo.

Under a news post, which attracted 2 million views, a popular comment said, “it’s unfair for a winner to be treated in that way. It’s an insult to our country and is a malicious slander of Sun Yang.”

The Communist Party-run People’s Daily posted a video about the 200-meter freestyle event that praised Sun Yang’s victory. The People’s Daily said “needless to say, proof is in the performance!” The post received 38,000 likes.

Sun, a three-time Olympic gold medalist and 10-time world champion, was suspended for three months in 2014 after Chinese anti-doping regulators found that he had taken a banned stimulant that he said was for a heart condition.

In September, he was accused of smashing a vial of his blood with a hammer after drug-testers came to his home to collect blood samples.

The International Swimming Federation (FINA), the global swimming body, cleared Sun of wrongdoing over the September incident, but the World Anti-Doping Agency (WADA) has appealed that ruling.

According to media reports, WADA didn’t think that a warning was a sufficient punishment for Sun after “the bizarre incident during a routine out-of-competition test at his home in China in November.” In September, the case will go before the international Court of Arbitration of Sport and could result in Sun being banned from competing.

On July 19, Sun’s lawyer Zhang Qihuai issued a statement that said Sun hopes that the hearing will “prove the athlete’s innocence.”

Zhang refused to comment on the two swimmers’ refusal to acknowledge Sun.

Isabella Li contributed to the report.