Editorial: China’s Tax Cuts Must Be Accompanied By Systemwide Reform 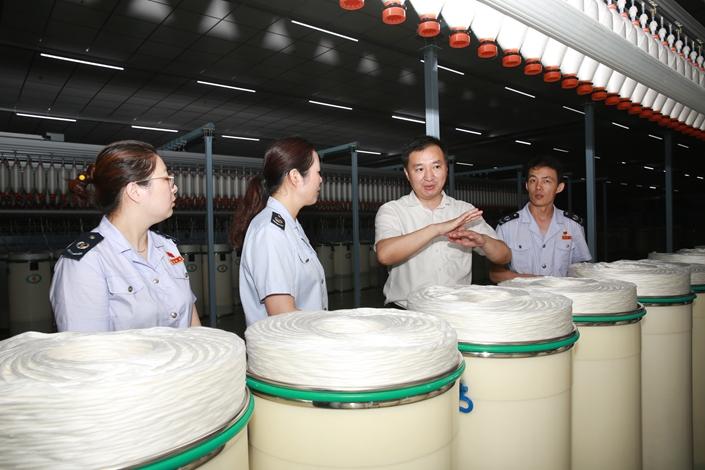 China’s tax and business fee reductions, aimed at stimulating growth, have started to take effect. But this means many local governments are seeing the gap between their revenue and expenditure increase.

According to the latest data from the State Administration of Taxation, 1.17 trillion yuan ($170 billion) of new tax cuts and fee reductions kicked in during the first half of the year. Out of this, tax cuts accounted for 1.04 trillion yuan, with 116.4 billion yuan resulting from the Inclusive Tax Deduction and Exemption Policies for Micro and Small Enterprises. Additionally, during the first half of the year, premiums paid by enterprises for employees’ basic pension, unemployment and workplace injury insurance fell by more than 128 billion yuan. More than half of the annual reduction target of 2 trillion yuan has already been achieved. However, the growth of fiscal revenue has slowed down markedly. Some provinces have even seen negative growth in fiscal revenue. The financial impact on lower-level governments is greater, and some underdeveloped areas in the central and western regions of China are even suffering from a large gap between revenue and expenditure.

How should we view this dilemma and what should be done?

The policy of reducing taxes and fees should continue to be carried out steadfastly. There is no room to hesitate or turn back. The policy is the response of the central government to many years of strong appeals from businesses, and is an instance of good governance that has not come easily. It should also be acknowledged that although the considerable tax and fee cuts have been accompanied by an improvement in private investors’ enthusiasm, the cuts so far have still been insufficient to support economic recovery. The dilemma mentioned above comes as no surprise, because it involves balancing long-term and short-term fiscal revenue and expenditure. Essentially, it is a matter of contradictions within the system, structure, and between various interests.

The rationale for tax and fee cuts is the idea of the “Laffer Curve”: Tax cuts can stimulate business investment and thus promote economic development. Up to a certain point, an expansion in the tax base will, in theory, more than make up for the reduction in tax rate, meaning that government revenue increases. However, although tax reduction can lighten the burden on enterprises, it does not necessarily activate economic growth. Its effect depends on a series of deep, institutional factors. If structural reforms fail to keep pace, tax cuts may in fact create the most undesirable situation: the economy continues to decline, the imbalance between fiscal revenue and expenditure grows, and business conditions do not improve fundamentally. In order to make the tax and fee reduction measures truly effective, the Chinese government should devote more energy to comprehensively deepening system reform, speeding up the pace of reform of state-owned enterprises, breaking administrative monopolies, expanding market access, improving the business environment, and strengthening support for private businesses’ entrepreneurship and innovation activities. China’s potential GDP growth rate is declining. This is not only a problem related to the country’s current stage of development, but is also the result of systemic constraints. This is the insurmountable “iron threshold” for tax and fee reduction.

The path to fiscal balance involves increasing income and reducing expenditure. The central government and some local governments have taken measures to deal with the income side of this equation. The central government has increased transfer payments, accelerated the pace of allocation, and some other localities have adopted measures such as transferring budget-stabilization adjustment funds, liquidating remaining assets, and arranging for local state-owned enterprises to transfer profits to the authorities. These measures will help to temporarily ease the pressure on local fiscal revenue. However, these measures are constrained by the overall financial situation of the country — the profits of state-owned enterprises are already being used in a variety of ways, and there isn’t enough to go around. On the expenditure side, social security and other similar items create a “ratchet effect,” and are easy to raise and difficult to lower. At the same time, the government cannot suddenly reduce its infrastructure investment at a time of growing downward economic pressure. The central government has repeatedly asked departments at all levels to tighten their belts, and there is little room for the “three public expenditures” — travel, transportation and meal expenses for government officials — to be further squeezed. Only through system-wide reform and the realization of high-quality development can China solve the tension between tax and fee reduction and fiscal balance.

The majority of small and midsize enterprises (SMEs) are struggling. The main reason, aside from the heavy burden of taxes and fees, is that profits are getting thinner and thinner. In the manufacturing industry, these enterprises are often in the middle and lower stretches of the industrial chain, and are subject to upstream monopolies that control product pricing, raw material purchase and other factors. In recent years, the central government has vigorously fought against barriers to entry, and has actively eliminated all kinds of discrimination in law and policy. This firm market orientation deserves praise. However, the pattern of interests formed over the years is extremely difficult to break, and it is easy for policy implementation to deviate from paper regulations, so the industrial ecosystem has not changed significantly so far. Currently, private enterprises even have poorer access to some industries than foreign-funded enterprises.

In the modern service industry, it is clear that there is room for market access to improve for SMEs. This situation has seriously hampered the intrinsic innovative spirit of these enterprises, and thus undermined the overall vitality of China’s economy. Obviously, tax and fee reduction can reduce the burden on the majority of SMEs, but it cannot increase their strength. Effort needs to be expended in some other areas in order to strengthen these enterprises.

The majority of SMEs also face heavy financing costs. In recent years, the central government has attached great importance to solving the problem of difficult and expensive financing, to the extent that the financial supervision departments have even included it in banks’ rigid assessment indicators. However, the proportion of SME loans in total bank loans has only improved to a limited extent. Compared with the problem of expensive financing, lack of access to financing is a more essential issue. Massive loans continue to pour into industries and enterprises with very low return on assets, propping up “zombie enterprises” and fueling local government debt risk. This seemingly abnormal behavior by banks is actually the rational reaction to certain incentives, including the soft budget constraint formed by the “blood relationship” among state-owned holding enterprises, governments at all levels and state-controlled financial institutions.

There is still much that can be done to bridge the gap between revenue and expenditure brought about by tax and fee cuts. For example, China should straighten out financial relations between levels and departments of government, speed up the reform of the division of financial powers and expenditure responsibilities between the central and local governments, reduce instances of local governments footing the bill for central initiatives, improve the performance evaluation of the use of financial funds while using these funds efficiently, and continue to accelerate social security reforms. The government should transfer state-owned assets to enrich social security funds, and increase the proportion of profits handed over to the government by central and local state-owned enterprises and state-owned financial institutions.

The essential aim of the tax and reduction policy is to adjust the distribution of national income between the government and enterprises. China’s economy will gain momentum only when the vast majority of enterprises are revitalized. Of course, tax and fee reduction is only one measure, and has a greater effect on the symptoms of the problem than on the root cause. We should also pay attention to the idea of using policies on the one hand and countermeasures on the other. The recent sharp increase in non-tax revenue has caused great public alarm. Tax and fee reduction itself also needs a sound supervision and assessment system that focuses on both quantity and quality.