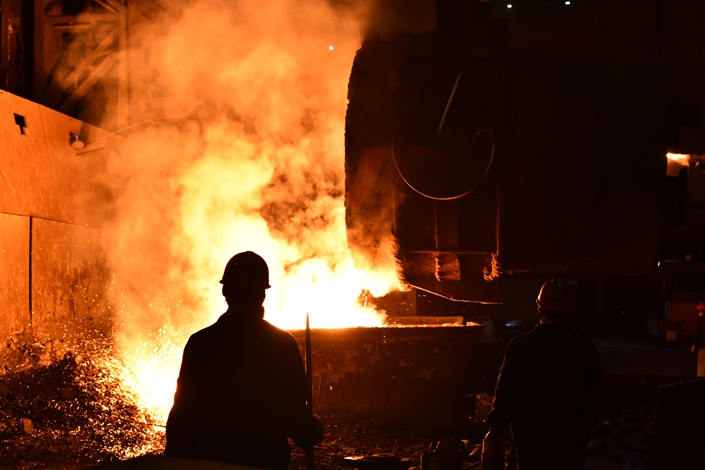 Steel is made at a mill operated by the Shandong Iron and Steel Group on July 21. Photo: IC Photo

China is showing growing signs of backsliding from its recent campaign to slim down its bloated steel sector, led by smaller producers that are quietly adding new capacity during equipment replacement cycles, officials of the nation’s top industry association said.

“Now more places have removed capacity, but the amount of actual output is rising sharply,” said Wang Wei, an official in the materials division of the Ministry of Industry and Information Technology (MIIT), at a meeting of the China Iron and Steel Association on Monday. Wang added that companies are illegally adding capacity and boosting output, creating a sudden problem for the industry.

China is the world’s largest steelmaker, accounting for more than half of global output. Much of that was built up during the country’s rapid modernization when steel was in high demand. But growth is slowing in sync with the slowing economy, prompting Beijing to embark on a campaign to eliminate capacity and consolidate the sector around the largest, most efficient players.

Despite that, some producers appear to be adding new smelting capacity by applying to build projects for things like cast iron alloy and integrated use of natural resources as their premise, according to a survey by the MIIT. In China’s planned economy, such large projects typically require approval from local and national regulators before they can move ahead.

To respond to the risk of backsliding, the MIIT and National Development and Reform Commission, China’s state planner, set up a team earlier this year to look at this phenomenon and guard against new risk.

Recent new additions in capacity are coming from non-association members, according to officials at the Monday event. Such producers made about a quarter of China’s crude steel in the first half of the year, but accounted for 56% of new capacity added during that period. As a result, production from such members rose 24% in the first half of the year, well above a 5.6% rise for association members.

“Is these companies’ capacity in compliance, does it conform with industry and environmental protection policies?” asked association head Gao Xiangming.

China’s campaign to slim down the sector saw around 150 million tons of capacity removed between 2016 and 2018. Despite that, the nation’s steel production rose 8.1% in 2018 to a record 928 million tons, according to government statistics. National statistics show that crude steel consumption rose 10.6% in the first half of this year to 460 million tons.