Zhang Mei: Why You Should Still Travel to China Amid Trade War 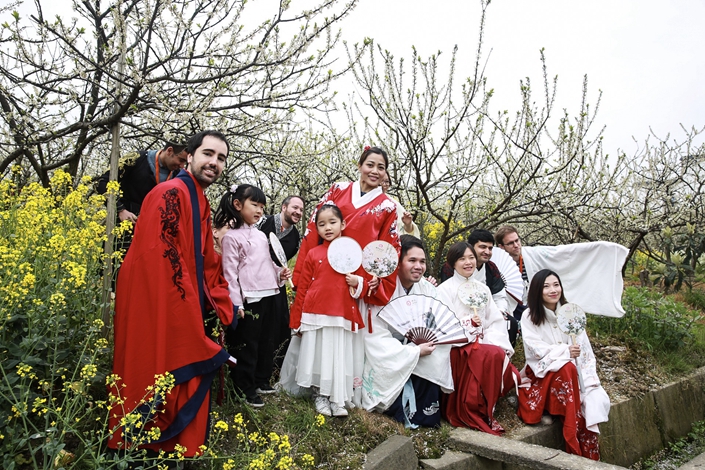 A few weeks back, I took my daughters back to China to visit their grandparents, uncles, aunts and cousins — the usual sprawling Chinese family. Eager to curb the girls’ screen time, I jumped at my aunt’s suggestion to go blueberry picking.

Most of my relatives live in Chengjiang, a small town that borders one of the cleanest alpine lakes in Southwest China’s Yunnan province, called Fuxian Lake. “Fuxian” means “gently touching a fairy” and you can understand why when you look out at the lake cradled in the surrounding mountains. A few years ago, the government designated the lake as a water source of strategic import­ance. Since then, immense effort has been given over to keeping the water clean. Fertilizer-heavy fields of tobacco and snow peas have given way to a green belt of lavender and lotus flowers. Organic blueberry farms have sprouted up like bamboo shoots in the springtime. And the berries are juicing Chengjiang’s economy.

At the berry farm, we walked through an empty shed where we each picked up a basket and headed for the berry patch. There is something extremely satisfying about holding a big fat berry in one’s fingers. After filling our baskets, we presented our harvest to a farmer who weighed and boxed them for us. Then I noticed something. A Huawei phone on a tripod was connected to a power cord, aiming at the table with baskets of blueberries.

“Livestreaming for what?” I asked, my curiosity growing.

“To sell blueberries on Taobao of course.” He glanced at me to see whether I was serious. “Everybody’s doing it.”

He then explained that he is in charge of social media and online sales for this farm. Each day, hundreds of people watch the stream and then place orders on Taobao. He then packs the berries in a white plastic foam box, adds an icepack on the side and ships the box out that same evening. The berries make their way to homes or offices in Shanghai and Beijing by noon the next day.

He handed us our berries together with a business card, and then sat down in front of the camera. He channeled the tone of an emcee in front of a live audience as he spoke into the phone. “Dear viewers, live from the banks of the beautiful Fuxian Lake, I have a Chinese-American lady visiting with her two daughters. They are here to pick our delicious organic blueberries …”

Off he went into the virtual world, weaving the visiting Americans into his sales pitch, leaving me to marvel at the new reality of a blueberry farmer in China.

The crazy irony of a traveler’s life is that we can occupy two different worlds simultaneously. As I walked from the blueberry farm, an email with the title “China Itinerary concerns” landed into my inbox. It said: “… We have serious concerns about the grave and unpredictable political climate now existing between the U.S. and China. We … are wondering if Americans in general are being welcomed by the Chinese people throughout the land and villages …”

Yet while those concerns might be justified, at the same time, my Eurasian daughters and I were deployed by a blueberry farmer to boost sales.

I’ll leave the serious discussion of the trade war and U.S.-China relations to the pundits, but I am more than happy to share some experiences from the road to make the point: trade war or no trade war, you should still come to visit China.

When, a long time ago, I told my late grandmother that I was dating an American, her immediate response was to launch into a story. “In the 1940s, we were living in Kunming. The war was going on. One day, the siren went off. We immediately jumped into a ditch by the side of the road. I looked up. I could see the Japanese sun painted on the belly of the plane. We braced for the worst. Then another plane came chasing after the first. We looked up again, and I could see the jaws of a shark. It was the Flying Tigers! The Americans were here to save us. Americans, good people.” With that, I got my grandmother’s blessing.

Memories as such are passed on from generation to generation, and I don’t think my grandmother’s view was singular. I have spoken with guides and drivers all over China, and one of the questions is, “tell me a story about your favorite client.” The stories are often about an American lady who takes time off on Fridays to volunteer at an orphanage; or an American couple insisting on finding the chief of the Shanghai Museum because they want to donate a prized family collection.

The stories go on and on, and they haven’t changed for the past 20 years. Such human stories don’t get a mention in the news, but they are, in my opinion, more real than the trade war.

The small kindness of strangers doesn’t make the news, but it makes the trip.

Secondly, the troubles between the United States and China don’t make China any less interesting as a place to visit. I would argue, that makes it more urgent to travel to China and judge for oneself.

The iconic sites will always be there. And they are better presented than before. There are interpretive experiences and conservation efforts at the Forbidden City and Dunhuang.

But it’s the changing fabric of Chinese society that is the most fascinating.

One example is in education and parenting. Amy Chua’s book “Battle Hymn of the Tiger Mother” set off a heated debate about childrearing philosophies, pitting East against West. My daughters’ travel to China showed them a childhood they could never imagine.

Because we were visiting home, a family dinner was a must. All of the aunts and uncles and cousins were there. We drove to a posh private school to pick up my nephew Xiaoyu for dinner. He was waiting for us at the entrance, dressed in a spiffy school uniform that wouldn’t have looked out of place at Eton. He carried a backpack. We arrived at the restaurant, and my girls ran to the pingpong table for a few games before dinner. Meanwhile Xiaoyu sank into the corner of the private dining room, and started on his biology test sheets. I asked him to stop studying and come play. He looked at me and quietly said, “No.” In fact, normally he would not even be allowed to come out for dinner. Dismissal from school is at 9 p.m. This night, his teacher allowed him to bring his homework to dinner and asked for a photocopy of his completed work by 8 p.m.!

My girls, visiting China between a trip to Costa Rica and two weeks of tennis camp at Stanford, were in shock. Are my girls not working hard enough? Are they going to make it in the future? Who is getting a better education? Who has a better life? Are these even the right questions to ask?

That’s what traveling to China makes us ponder.

Lastly, I am a perpetual optimist. The fear caused by current political turmoil will be short-lived.

When 9/11 occurred, my business was only in its second year. The phone rang and rang and emails flooded in — all cancelations for the fall season of 2001. We were doomed, I was convinced. By December, a few adventurous travel agents came to test the waters. By May 2002, traveler bookings had pushed our capacity to the limit.

The day I knew SARS was serious was when our contractor paused the renovation on our courtyard office in Beijing. He was going home, for fear of the life-threatening virus. That was May 2003. All of our colleagues went on a delayed pay plan and a three-month summer sabbatical. I figured, if I could keep cash outflows to a minimum, we could last one year. By August, the phone started to ring. By September, we repaid all our staff.

This time, U.S.-China relations are in turbulent waters. Will the storm reign over the entire Pacific Ocean? Or is this just a treacherous patch in the eye of the storm? Only time will tell.

Mark Twain once said: “Travel is fatal to prejudice, bigotry, and narrow-mindedness, and many of our people need it sorely on these accounts.”