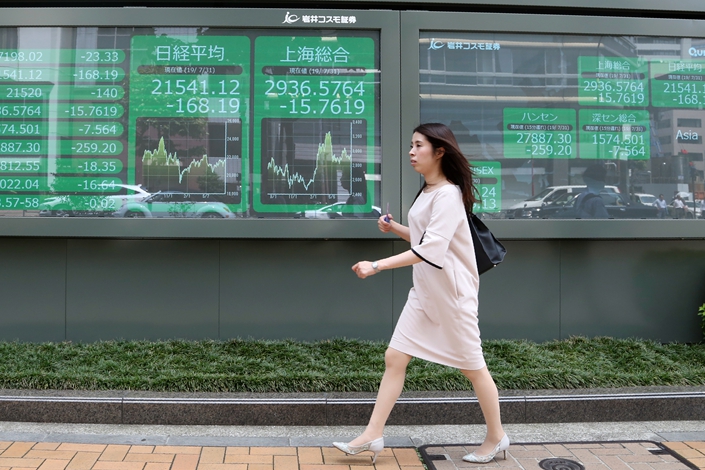 (Bloomberg) — Asian stocks tumbled and U.S. futures dropped after President Donald Trump announced a new round of tariff hikes on Chinese imports. The yen extended gains after the biggest jump in more than two years.

Elsewhere, crude oil clawed back a fraction of its 8% slide on Thursday, amid concern the U.S. plans for 10% tariffs on $300 billion of Chinese imports will hurt global demand.

Lenders led losses on U.S. equity benchmarks but the declines spread across sectors as a draft list of $300 billion worth of targets published by the Trump administration in May included a raft of consumer and technology goods, including most of Apple’s major products such the iPhone, along with toys, footwear and clothing. The new tariffs are set to kick in Sept. 1. Trump also said the levies could be raised beyond 25%.

“We’re just seeing the beginning of what the market reaction’s going to look like,” given the breadth of the impact of the new tariffs, said Arthur Hogan, chief market strategist at National Securities Corp.

Traders increased bets on Fed cuts to another half point this year. That was just a day after some disappointment with the Federal Reserve chief casting doubt about a long cycle of interest-rate cuts had sent yields higher.

“The question for investors is whether this is the first step in a series of escalations or a negotiating stance that will compel China to make concessions and the Fed to ease,” said Steve Englander, global head of FX research at Standard Chartered Bank. “A risk for investors is that asset-market effects would be largely reversed if the tariff increase were delayed or canceled. If the president can elicit concessions from both China and the Fed, it would be a double win from his perspective.”

Here are the main moves in markets:

* China’s offshore yuan was little changed at 6.9552 per dollar after sliding overnight. Onshore, the currency retreated 0.5%.