By Qing Ying and Han Wei 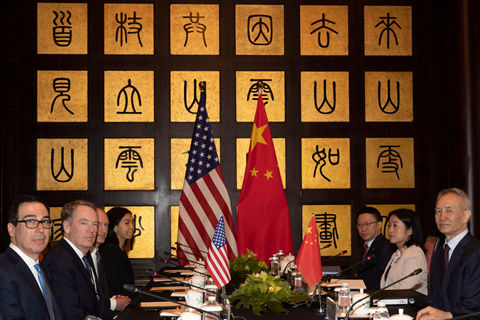 Even as Chinese and American trade negotiators laid plans to maintain “intensive consultation” this month, President Donald Trump said he will impose 10% tariffs Sept. 1 on an additional $300 billion a year of imports from China.

Trump disclosed the expansion of tariffs Thursday in a tweet in which he also complained that China failed to increase agricultural purchases and to cut off the flow of the opioid drug fentanyl to the U.S. from China as he said President Xi Jinping promised. Trump said the new duties will be in addition to the tariffs of as much as 25% on $250 billion a year of Chinese imports.

The Dow Jones Industrial Average plunged 200 points following the news, erasing a gain of 300 points earlier in the day. China didn’t immediately respond to Trump’s tweet, which he concluded by writing, “We look forward to continuing our positive dialogue with China.”

The American president widened the ongoing trade war just hours after China’s Ministry of Commerce discussed the results of two days of high-level talks earlier this week in Shanghai. Ministry spokesman Gao Feng reported Thursday that trade negotiators at the meetings sought to figure out why previous talks stalled and what to do in the future while staying in close touch ahead of a next round set for September.

Negotiators led by U.S. Trade Representative Robert Lighthizer, Treasury Secretary Steven Mnuchin and China’s Vice Premier Liu He wrapped up two days of meetings Wednesday in Shanghai in the 12th round of trade talks, the first formal sit-down since top leaders declared a ceasefire at a G-20 summit in June.

As expected, there was little sign of progress after this week’s meeting, but the two sides agreed to meet again in September in Washington.

Negotiators from the two countries discussed two main topics in the Shanghai meetings. One was why the previous talks broke down, and the other was what to do in the future, Gao said. Officials clarified their views regarding certain trade and economic issues and identified principles and methodology for future negotiations, as well as relevant timetables, Gao said.

Negotiations to resolve the trade dispute between the world’s two largest economies broke down in May as the two sides blamed each other for derailing attempts to reach a deal. The U.S. hiked punitive tariffs on $200 billion yuan of Chinese goods from 10% to 25%, followed by retaliatory levies from China.

Although a meeting between Xi and Trump in Japan paved the way for resumed talks, expectations for progress during the Shanghai meetings were low.

Larry Kudlow, director of the U.S. National Economic Council, told CNBC before the meeting that he expected the negotiators to “reset the stage” and “hopefully go back to where the talks left off last May.”

Negotiators in Shanghai discussed how China could increase purchases of American agricultural products and how the U.S. could create conditions for such purchases, Gao said.

Several Chinese enterprises, including state-backed and privately owned, have consulted with U.S. suppliers for the purchase of soybeans, cotton, pork and sorghum, among others, since July 19, according to Gao. Some deals have been reached, and related companies have applied to authorities for exemptions from China’s duties on American agricultural products, Gao said.

China and the U.S. announced tariff exemptions on certain products from each side earlier this month to show goodwill for future talks.

Gao repeated China’s position that any deal should be made on the basis of equality and mutual respect. He said the U.S. needs to show sufficient sincerity and properly address China’s core concerns to reach an agreement.

During the Shanghai talks Tuesday, Trump blasted a series of tweets criticizing China’s trade practices and suggesting that delaying an accord until after the 2020 American election might lead to “much tougher” terms or “no deal at all” if he wins.

“The U.S. side should make positive efforts, show sincerity and goodwill, and create a good atmosphere for the consultations,” Gao said.