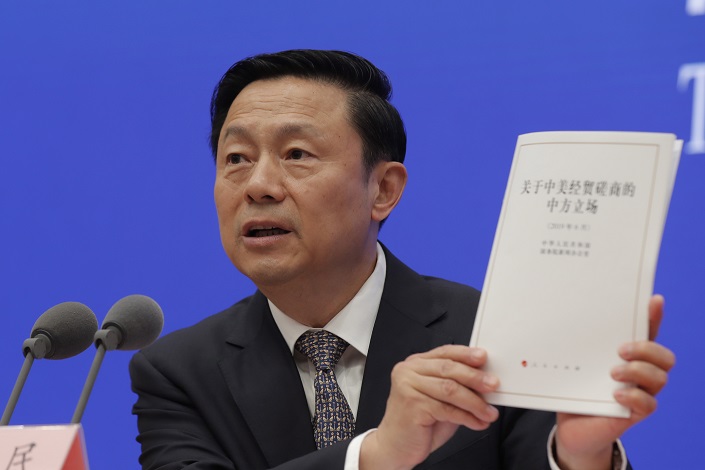 Guo Weimin, Vice Minister of the State Council Information Office, holds the White Paper on China's Position on the China-US Economic and Trade Consultations at a press conference on Sunday. Photo: IC Photo

The U.S. is entirely responsible for recurring setbacks in negotiations with China during their ongoing trade conflict, Beijing said in a white paper released Sunday providing a detailed recap of the clash that dates back to more than a year ago.

The trade war began with the U.S. government’s initiation of a Section 301 investigation against China’s trade practices in March 2018 and the announcement of initial punitive tariffs by Washington later that month. The U.S. took those actions despite China sending a trade delegation to Washington for talks a month earlier – one of several instances of U.S. “backtracking” described in the paper.

The most recent instance, according to the paper, came when the U.S. blamed China last month for stalled talks and announced further tariff increases. China said it had no choice but to take powerful response measures to defend its interests in response to U.S. trade actions since the conflict began, according to the document.

The paper, which reiterated China’s stance on the ongoing trade conflict with the U.S., said China’s attitude has been “consistent and clear.” It added that while the Asian country did not want a trade war, it was “not afraid to fight” if necessary.

The document also outlined reasons why the trade war is hurting the U.S. itself, citing increased production costs for American companies, higher prices for U.S. consumers, and projections of lower growth for the U.S. economy due to the frictions.

The white paper’s release comes after Beijing hiked tariffs on $60 billion worth of U.S. imports effective Saturday, a tit-for-tat response to U.S. President Donald Trump’s move to increase duties on $200 billion worth of Chinese products on May 13.

China also announced on Saturday it would soon begin placing foreign companies considered to have damaged the interests of its own companies on an “unreliable entity” list. The move was widely seen as retaliation for a U.S. Department of Commerce decision to place Chinese telecom giant Huawei Technologies Co. Ltd. on its own “Entity List,” effectively cutting the company off from its U.S. suppliers.

At a press briefing Sunday the same day as the paper’s release, Vice Minister of Commerce Wang Shouwen said the introduction of China’s own “unreliable” list should not be “over-interpreted,” adding the list was aimed at protecting “stable, fair and sustainable trade between enterprises.”