By Wang Mengyao and Denise Jia 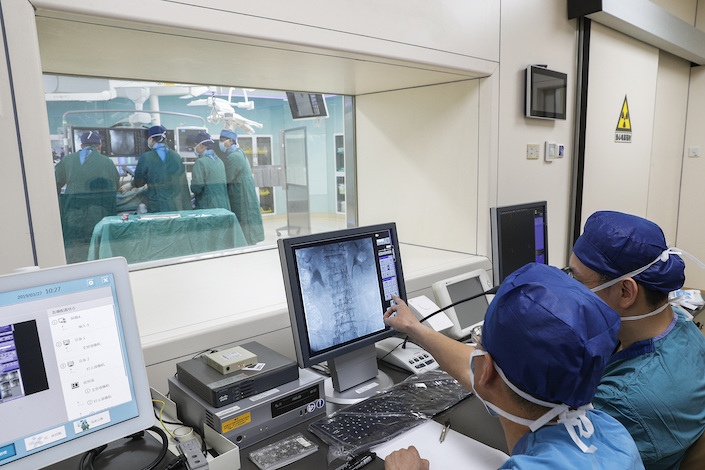 The head of a Chinese medical equipment rental giant was arrested by authorities for investigation of fraud.

Police in southwestern Guangxi Province arrested Remote Horizon Group Chairman Han Shanchun Wednesday in Beijing and are sending him to Guangxi, where he and his company were sued by a hospital for contract fraud involving more than 26 million yuan ($3.77 million).

In the lawsuit filed May 27, Guangxi Pingnan County Second People’s Hospital alleged that a subsidiary of Remote Horizon and a lease financing company failed to deliver medical equipment under leasing contracts and sued the hospital for unpaid rent totaling 26 million yuan. The hospital’s funding was frozen by the court.

The hospitals don’t need to pay to purchase any equipment but only need to distribute a proportion of their revenue from medical treatment using such equipment to Remote Horizon.

Remote Horizon gets as much as 25% of the revenue from the hospitals, according to a contract reviewed by Caixin. Such contracts could be valued from 1 million yuan to 50 million yuan, data from hospitals show.

Most of the hospital partners are county-level public institutions. Remote Horizon also often invites well-known experts to these hospitals, which helps to promote the hospitals’ reputations.

This chain broke in the second half of 2017 when many hospitals didn’t receive equipment after signing contracts with Remote Horizon and financing companies. The hospitals reported fraud to local authorities. The financing companies have also taken a number of hospitals to court for unpaid rent.

In May 2018, the Ministry of Public Security asked local police to investigate the fraud claims involving Remote Horizon.

When questioned by Hunan police in May 2018, Remote Horizon chief Han said the company failed to deliver equipment to a hospital because the company was having financial difficulties since the second half of 2017, according to the police record. Han said Remote Horizon has been in a state of paralysis since September 2017.

Business registration data show that several subsidiaries of Remote Horizon were listed as defaulters for failure to execute effective orders or listed as abnormal businesses because they couldn’t be reached.