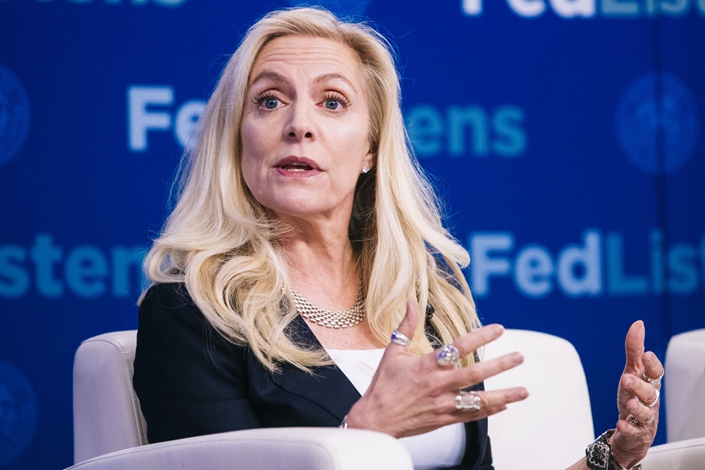 (Bloomberg) — The Federal Reserve will be leaning closer to reducing interest rates again next month after President Donald Trump ratcheted up his trade war with China and the central bank may even have to cut more steeply than it did last week.

Fed Chairman Jerome Powell called last week’s quarter-point reduction a “mid-cycle adjustment to policy,” not the first in a long series of moves. Yet the ratcheting up of global tensions — which stands to hit consumers harder than in the first year of the tariff battle — has further boosted uncertainty for businesses and sent stocks and U.S. Treasury yields plummeting.

The upshot is that the Federal Open Market Committee (FOMC), however reluctantly, is poised to cut rates again at its Sept. 17 to 18 meeting, with investors putting about 35% chances on a half-point reduction. While the Fed has no say over trade policy, it can try to ease financial conditions and support growth by lowering borrowing costs.

“If this continues, the odds of a 50 basis-point move are higher,” said Neil Dutta, head of economics at Renaissance Macro Research in New York. “The downside risks to growth have increased. The haphazard nature with which this policy is being pursued creates uncertainty and companies don’t know what is happening next.” That will “freeze activity,” he said.

Stocks recorded their biggest loss this year after China struck back in its trade dispute with the U.S. and let the yuan tumble to the weakest level in more than a decade. Rates on 10-year Treasury notes sank to 1.72% on Monday, deepening a yield-curve inversion compared to three-month bills that has preceded economic downturns.

“A 50 basis-point move in September is much closer to the base case now,” said Ed Al-Hussainy, senior interest-rate and currency analyst at Columbia Management in Minneapolis. “If this is a precautionary cutting cycle, let’s take this insurance out right now. A 25 basis-point move now is disproportionate to the risks that are on the table.”

Powell described last week’s action as insurance, similar to the actions Alan Greenspan took in 1995 to 1996, to keep the 1990s economic expansion intact.

Another reason to move: The decline in interest rates globally suggests the neutral interest rate — the level which neither speeds up nor retards growth — is lower. Brainard, in a 2015 speech, noted that “the foreign outlook has become increasingly important as a source of downward pressure on the neutral rate in the past few years.”

One reason the Fed might be cautious is that Trump’s trade policy has whipsawed markets, with a tweet creating market concern one day only to be resolved shortly after. In June, for example, Trump threatened tariffs on Mexico related to its immigration policy, only to drop the plans days later.

Conditions have tightened a bit with the trade war with China

Another factor that may weigh on Powell and Co.’s mind is that monetary policy actions typically have effects that take place for a year or more. That could see the Fed cutting rates this year, only to have Trump reach a deal in 2020 “that boosts sentiment, but the Fed feels reluctant to take back the cuts because of the approaching presidential election,” Goldman Sachs Group Inc. economists led by Jan Hatzius said in a note Sunday.

George, appearing on stage alongside Brainard on Monday, said “markets move quickly. It takes some time to see how that evolves. And so the best I think that you can do right now is just to monitor and see how that unfolds.”

While consumer spending data have been solid, business investment has been faltering and manufacturing weak.

“They will go in September, but it’s unclear how much they can actually do to shore up confidence in a world when policy can shift in the speed of a tweet,” said Diane Swonk, chief economist with Grant Thornton LLP in Chicago. “The Fed is between a rock and a hard place.”