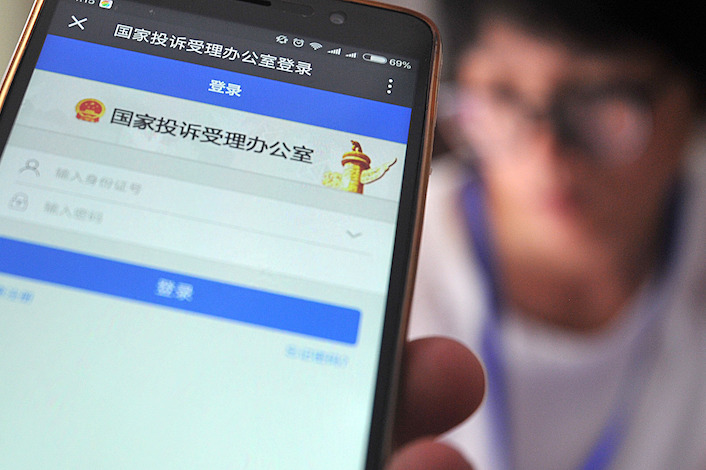 Chinese people, especially in rural areas, often petition higher authorities when they believe their cases are not being fairly handled by local officials or the judicial system. Photo: VCG

A teacher in China’s coastal Jiangsu province stirred up public opinion online over the weekend by posting a suicide letter alleging mistreatment by authorities as she sought compensation for the blinding in one eye of her 10-year-old daughter.

Li Xiujuan, a 39-year-old teacher at the Zhoulou Primary School in Jiangsu, wrote that she and husband Liang Shiwei, the school’s principal, were “preparing to leave the world.” She wrote that she was beaten and detained for seven days in March by police in Fengxian county and was later punished by local education authorities and that her husband was dismissed from his position.

Local authorities denied the allegations, and Fengxian police said they found Li and Liang alive and safe late Sunday. But Li’s post on WeChat went viral. The letter was viewed over two days by more than 100,000 people, the maximum number displayed on WeChat for a single article. Li included her real identity and contact information.

While it’s difficult to distill the facts of this case from the claims and counterclaims, the incident spotlights controversies that can arise from China’s petition system. Chinese people, especially in rural areas, often petition higher authorities when they believe their cases are not being fairly handled by local officials or the judicial system. Local authorities take a dim view of such steps, however, considering them detrimental to social stability.

According to Li’s post, her daughter’s left eye was injured in March 2018 in a playground accident. While the girl lost sight in the eye, the school failed to properly handle compensation, Li wrote. Li said she was detained because police believed she was planning to petition higher authorities in Beijing, although she said she intended the trip for daughter’s medical treatment.

The Fengxian government issued a statement Sunday afternoon saying a special team was formed to investigate Li’s case. On Monday, the Fengxian government said investigators didn’t find evidence that Li was beaten or insulted during a police inquiry. Her husband Liang was removed for misusing an official seal on their daughter’s injury assessment and failing to stop Li from making repeated petitions. Li has made 15 trips to Beijing, a seven-hour drive, claiming unsatisfactory compensation, the local government said.

Li said she took the daughter to Beijing for treatment in July 2018 and went to the National Public Complaints and Proposals Administration, which hears public complaints. She sought to report the case in “hopes for more public attention on school safety,” she wrote. Li was questioned by a Fengxian official surnamed Zhao when she left the administration and recorded the petition, Li said.

Li said she planned to go to Beijing again for her daughter’s medical treatment but was met March 1 this year by officials from the Fengxian Education Bureau and her school, requiring her to give up the trip. She was detained that night by police and beaten before she was sent into custody for seven days, Li wrote in the online post.

Li said she was under surveillance by school officials after her release, causing “unbearable pressures” on her and leading her to suffer “severe depression.”

Li also posted online a document she said was issued by the Fengxian Education Bureau on June 25 handing out penalties to Li for violating the Public Security Administration Punishment Law. Caixin was unable to verify the document’s authenticity as inquiries to the Zhoulou school and Fengxian education bureau went unanswered.

Local officials tell a different story. Luo Lie, deputy director of the Fengxian police station, said in an interview with the Beijing News that police officers made inquiries with Li March 1 after receiving reports from Fengxian education bureau officials that Li was threatening to petition Beijing authorities again. Li fiercely resisted the inquiry, which led to her detention, Luo said.

The Fengxian government said in its Monday statement that an examination of the video records of police officers’ behavior didn’t find beating or abuse.

Li asked the school to cover medical expenses and coordinate compensation of 360,000 yuan ($52,000) for her daughter’s eye injury, the government said in its statement. However, families of the classmates rejected paying compensation, arguing that it was difficult to prove a link between the girl’s injury and the classmates because a medical assessment was made more than a month after the accident. Officials suggested that Li take legal steps, which Li declined to do, according to the statement.

Li told the Beijing News that the amount of compensation was calculated by a local legal aid center based on an assessment of the daughter’s injury. Li said she never refused to turn to the legal system, but progress was delayed by medical treatments and based on a lawyer’s advice.

The Fengxian government said Li made dozens of complaints to different levels of authorities since April 2018. The National Public Complaints and Proposals Administration issued four notices turning down her case and suggesting she pursue legal remedies. In early August, the Fengxian education bureau and Li’s daughter’s school paid 31,135 yuan to compensate the family for medical treatment and relevant costs, according to the statement.

The government said it will further investigate the police handling of Li’s case and will support the family in seeking medical treatment for the daughter.

In a video interview with The Paper, Li said she and her husband sat by a lake for a half day Sunday feeling desperate and thinking about suicide. She published the letter in hopes of seeking justice, she said.