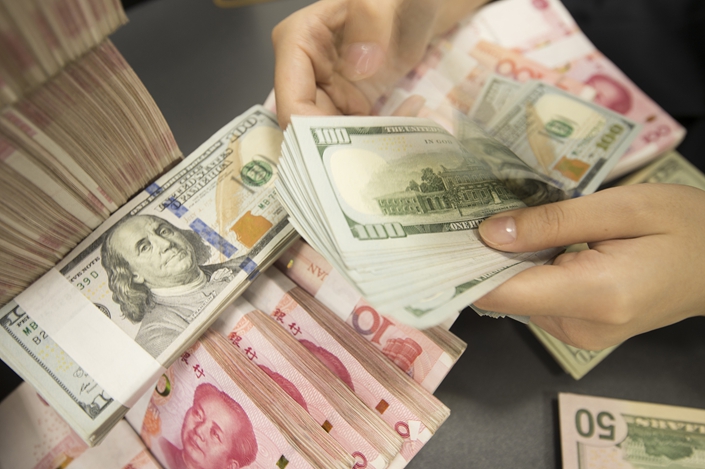 The U.S. Treasury Department designated China a currency manipulator on Monday after the U.S. dollar-yuan exchange rate broke past 7 and U.S. equity markets fell sharply. China does not meet two of the three U.S. Treasury Department standards for being a currency manipulator, which include a current account surplus greater than 2% of GDP and engaging in “persistent, one-sided” foreign exchange (FX) market intervention in the past 12 months. However, the U.S. Treasury has argued that because China has ample FX reserves to intervene in the market to stop the yuan from depreciating but has not, it should be considered a currency manipulator. Actually, in the past year, China has used a number of measures to keep the yuan from depreciating, in part due to U.S. pressure, although it has not directly intervened in the FX market in any significant fashion.

What does this mean?

We think the most important takeaway is that the risk of the U.S.-China trade war escalating has increased. According to current U.S. rules, the immediate consequence of being labelled a currency manipulator is not much — the U.S. Treasury is set to engage with China bilaterally and work with the International Monetary Fund to “eliminate the unfair competitive advantage.” After a year, the U.S. can then take actions such as excluding China from U.S. government procurement and from joining any new U.S. trade agreement. In practice, U.S. President Donald Trump can use this as a catalyst to increase tariffs on Chinese exports again (although he already faces no legal hurdles doing so) or can take other actions at will.

We think the latest U.S. move will likely harden China’s position in trade negotiations. In our view, the latest U.S. move, together with the unexpected (announcement of) U.S. tariff hikes on Chinese exports on Thursday, could be seen as further evidence that the U.S. administration may not really want to reach a trade deal soon and reduce China’s incentive to make additional concessions.

As set at the Politburo meeting, we think Chinese policies will incrementally ease, but a large new stimulus remains unlikely in the near future. We expect more liquidity offered by the central bank, including a 100 basis-point cut to the reserve requirement ratio by the end of 2019, which can help lower market interest rates, but we still do not expect a benchmark rate cut. We also expect more funding support for infrastructure to help boost infrastructure investment into the mid-to-high single digits in the second half of 2019.

In the case of further escalation, we think the government will likely ease both monetary and fiscal policy more (including rate cuts), take a less hawkish stance with regard to the property sector, and increase employment and social safety net support.