By Huang Meilun and Liang Yingfei 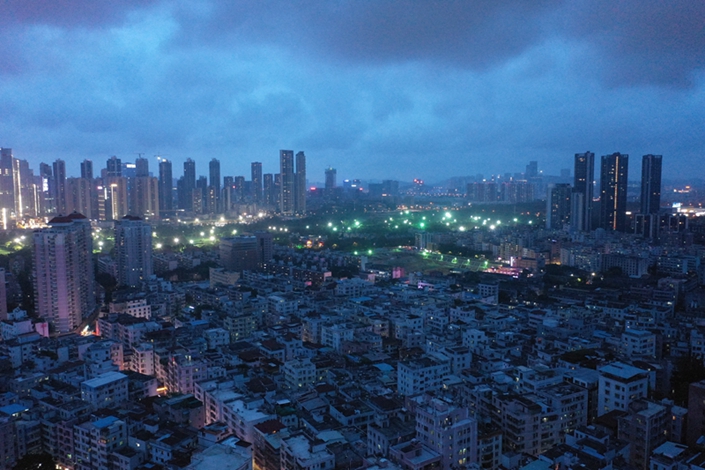 July 15, 2019. The low-rise cluster of the villages in Baishizhou is the size of a golf course, an enclave surrounded by fortune. Slowly, it will be transformed into towering buildings, shopping centers, and business. Photo: Liang Yingfei/Caixin

In July, residents of Chengzhong village in Shenzhen’s Nanshan district were notified that they must move out before mid-September.

Over the past 14 years, the pace of change in the southern metropolis’ Baishizhou area has markedly increased, often catching its “outsiders” off guard. Years after coming south to find work, many of these “outsiders” — migrant workers living in the area — have settled down and started families. They never considered returning to their hometowns until recently, when their children’s education was threatened by the latest wave of demolitions.

As a young and rapidly growing city, Shenzhen has a large floating population, with its 8.5 million registered permanent residents accounting for just 60% of its total population. Since 2015, the city’s permanent resident population has increased at an average annual rate of 500,000 people. Baishizhou, which encompasses five villages around Shahe Street, is one of the densest urban villages in Shenzhen with more than 150,000 inhabitants.

Nanshan district is known for its high land prices, and the villages are surrounded by villas, tourist attractions, high-tech industrial parks and large shopping malls. Walking into the village, the modern landscape stops abruptly.

Its location has served as a magnet for migrant workers. Compared with the surrounding commercial housing that goes for 100,000 yuan ($14,185) per square meter, Baishizhou is cheap. Many migrants have been living in this area for over a decade, developing their work, lives, and families. Baishizhou has allowed parents to migrate with their children, who can receive a better education in the city than in their hometowns. Moving away will alter the lives of entire communities.

In June 2017, Shenzhen announced a plan for the five villages. The city will build a complex that integrates housing, schools, retail, and other businesses. Within an area of 460,000 square meters (4,951,397 square feet), everything will be demolished. The new town, developed by LVGEM China Real Estate Investment, will be completed in 2029.

The residents’ transition will not be easy. Families with children face a particularly tough dilemma: for the kids to stay in their neighborhood schools, the family will have to pay rent two or three times more than what they pay now. If they move further out of the city, it will take the kids at least twice as long to get to school.

Shenzhen developed as a migrant-friendly city due to its loose public service access policies for residents who do not hold a “hukou,” the household registration every Chinese citizen has that is generally tied to where they were born. While most cities bar non-local hukou holders from accessing health care, education, and other social services in that city, Shenzhen officially allows the children of non-holders to access education, in some cases without even needing to sit exams for entry. Migrants need only supply housing lease certificates, residence permits, and social security records dating back one year and their children can apply for admission to the local public schools.

When the Baishizhou redevelopment plan was launched, Wu Juanjuan felt that this guarantee had been broken. She had repeatedly asked the landlord if there was a risk of demolition when she moved in — after her last home in a nearby village was suddenly demolished — but was told it wouldn’t be an issue. Three months after her family settled down in their new home, they received another eviction notice.

A household impact survey found that more than 90% of the 1,045 respondents had children in their families, and 60% of the respondents believed that the biggest impact the demolitions would have would be on their child’s education.

Though many of the public schools in Shenzhen have faced overpopulation problems, Nanshan had been relatively loose when it came to admission, making it easier for the children of migrant workers to attend. Other school districts, however, are not so relaxed, meaning transferring will not be easy.

As the deadline for relocation looms, residents have been rushing between offices, developers, and government departments searching for solutions.

Aiming to help residents with the problems they face, the Baishizhou government put forward three solutions via social media: first, the deadline for vacating the area will be pushed back by a month; second, they will provide rental information for the surrounding areas; and finally, they will provide school buses to take children part of the way to school.

Each day the people of Baishizhou pour into Shenzhen’s towering center. As night falls, the crowds leave work and return to Baishizhou, entering on all sides, making their way through noisy restaurants and disappearing into the labyrinth lanes. The area provides cheap labor for the surrounding areas but also attracts white-collar workers with offices nearby, and college students looking for a drink and an escape from the fast pace of the city. And soon it will be gone.

China’s floating population has been the main force behind urbanization, but it is this population that ends up bearing the brunt of gentrification. They often are the first to lose access to the short supply of public resources. What will be left of the “Shenzhen Dream” for the next generation?