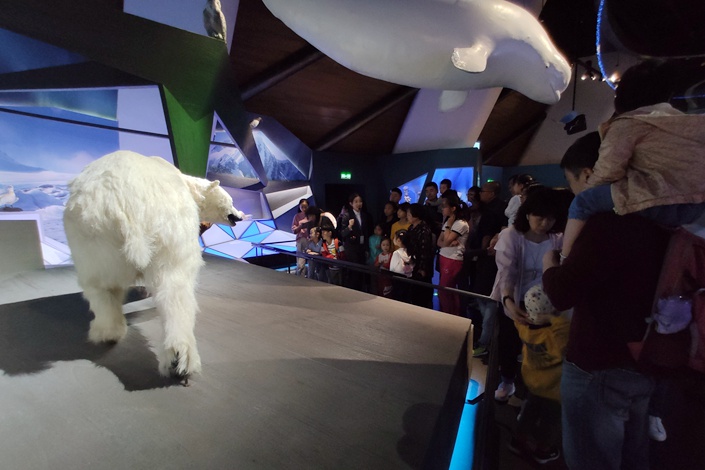 Families visit the National Maritime Museum in Tianjin on May 1. Photo: Wu Gang/Caixin

Since the publication of last year’s UN special report on humanity’s ability to arrest runaway climate change, environmental issues have roared to the top of the political agenda in Western countries prompting mass demonstrations in capitals around the world.

China’s role as the world’s largest greenhouse-gas emitter, and its position as one of the nations most vulnerable to the climate crisis’s associated health risks, has given rise to the question: How worried are Chinese people about climate change?

A new study tries to answer that, giving the most detailed picture yet of the way the Chinese public perceives the climate crisis.

The first-of-its-kind paper, published Thursday by British peer-reviewed journal The China Quarterly, finds that public concern about climate change and global warming is generally lower in China than in other countries.

But it paints a complex picture of environmental engagement in China riven with age, class, gender and regional divides.

Women, younger people, and those with “post-materialist values” — a term given to the pursuit of “higher” human needs beyond food, shelter, and security — are more likely to fret about the climate crisis, according to the report.

People who live in provinces that rely on carbon-intensive industries to generate much of their GDP tend to be more ambivalent. But there was no clear evidence people living in regions more vulnerable to climate change — such as coastal areas menaced by rising seas and typhoons — were significantly more concerned.

Smaller studies have previously canvassed Chinese attitudes on climate-related issues but they focused on specific issues and demographics. In contrast, the new paper from researchers at Chinese and American universities draws on a nationwide representative public survey of nearly 4,000 people alongside provincial environmental and economic statistics.

In the paper, the researchers urge China to ramp up environmental awareness programs, incorporate more climate-related subjects into school curricula and to target areas where concern about global warming and climate change is comparatively low. China should also restructure its economy around less carbon-intensive, more sustainable industries, the researchers say.

Li Shuo, a policy adviser at Greenpeace East Asia who was not involved in the study, told Caixin on Tuesday that the “unique” findings reflected his own experiences on the ground. Environmental causes have long struggled to win support in China outside the urban middle class, stymying public awareness of climate-related issues elsewhere, Li said.

But while global warming and climate change cause less concern in China than in developed countries the issues are nevertheless gaining ground. Li says he’s witnessed growing support for environmentalism “simply because people are feeling the impacts of climate change in one way or another,” and cites recent heat waves that swept across much of the northern hemisphere.

It remains unclear how such gauges of Chinese public opinion will translate into official action, Li said. Although evidence suggests that the country’s government sometimes responds to grassroots environmental activism, a lack of the kind of forums for public debate used by Western environmental campaigns means that most advocacy organizations in China target policymakers themselves rather than on-the-ground movements.

“There is an understanding in the environmental advocacy community that public opinion is just one kind of advocacy, but might not be the most prominent one,” Li said.