By Huang Yuxin and Han Wei 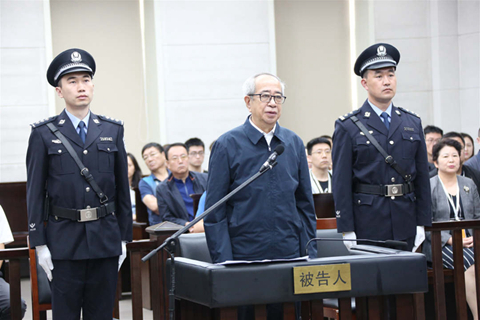 A former senior legislator in northern China’s Inner Mongolia autonomous region may have set a record for the country’s officialdom, though not a laudable one.

Xing Yun, former vice chairman of the Standing Committee of the People's Congress of Inner Mongolia, faces charges of accepting bribes worth 449 million yuan ($64 million), a record sum for a provincial-level official caught up in China’s sweeping anti-graft campaign since late 2012.

Prosecutors accused Xing, 67, of taking the bribes during his 20-year bureaucratic career in Inner Mongolia, using his power to help others get promotions or secure government investment deals, according to the state broadcaster China Central Television.

Xing pleaded guilty at a court hearing Thursday in Dalian in the northeastern province of Liaoning. The court said the sentence would be announced at a later date.

If convicted, Xing will top a list of disgraced senior government officials who are accused of taking massive amounts of bribes. Since late 2012 when the 18th National Congress of the Communist Party of China kicked off a corruption crackdown, a total of 19 provincial and ministerial-level officials have been charged with accepting bribes worth more than 100 million yuan. All of them except one have received reprieved death penalties or life sentences.

But larger sums of bribes have been found among lower-level government officials and state company executives. Zhang Zhongsheng, a former vice mayor of the poverty-stricken mining city of Lüliang in Shanxi province, was sentenced to death and executed last year for taking 1.04 billion yuan of bribes.

Lai Xiaomin, the former head of state bad-asset manager China Huarong Asset Management Co. Ltd., reportedly had three tons of cash stashed at home and a 300 million yuan bank account under his mother’s name. The exact size of ill-gotten gains related to Lai hasn’t been confirmed by authorities, but media reported that the amount could reach as much as 1.65 billion yuan. Lai was formally arrested in early November on charges of bribery, embezzlement and cronyism. He is now awaiting trial.

Xing is a native in Inner Mongolia and spent his whole career in the region’s government system. He joined Inner Mongolia officialdom in 1976 as a publicity official. In 2001, he became the first party chief of the newly established city of Ordos, a coal-mining hub in northern China.

The same year, Xing was elected a member of the Inner Mongolia party committee, a vice provincial level post. He later served as party chief of Baotou, a steel production city, and was then promoted to top law enforcement official in Inner Mongolia in 2006. Xing became the vice chairman of the provincial legislative body in 2012 and remained in the post until retirement.

In October 2018, nearly three years after he retired, Xing was placed under investigation. He was expelled from the party in April 2019 and formally arrested on bribery charges in May.

Xing accepted huge amounts of bribes in return for favors in job promotion, the Central Commission for Discipline Inspection (CCDI), China’s top graft buster, said in a statement. He intervened in the judiciary system and violated the party’s official appointment rules, and he colluded with private businessmen and was involved in exchanges of power, money and sex, the CCDI said.

A previous version of this story gave the wrong location of Dalian. It is in Liaoning province.