Child of a Persecuted Father 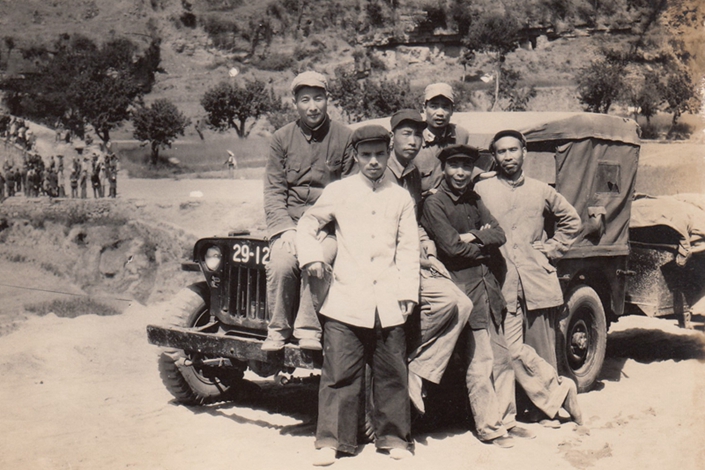 Editor’s note: This piece has been adapted from a series of diaries written by writer and director Gu Xiaoyang, based on his personal recollections of growing up during the Cultural Revolution (1966 to 1976) when his father was persecuted. Gu graduated from the prestigious Renmin University in 1982, and studied in Japan before moving to the United States in 1990.

Father had this ability.

It was the 1970s and Beijing was starting to build subways. Night and day, at mere meters from our home, workers dug and used pneumatic hammers to drive giant steel piles into the ground. The sound shook the earth, causing the entire neighborhood’s windows to clink.

Amid this din, father would stand frozen in front of the window, deep in thought. If he was bothered by the noise, he didn’t show it.

Father loved to ponder. If he entered deep thought, say when he picked up a book, everything around him disappeared.

Maybe it’s a skill he developed during the wars, while living in the caves of northwest China and in mountain valleys during resistance campaigns against the Japanese; during those long journeys spent on horseback. He was a loner and would rather write down his thoughts than speak them aloud. His colleagues thought he was eccentric.

It was a pity that all his writing was burned during the Cultural Revolution. We washed the ashes down the toilet in the middle of the night.

My parents tried to not burn books in front of us.

We had piles of them at home — they were dad’s only hobby. But during the “Destroy the Four Olds,” a campaign from early in the Cultural Revolution, during which people tore down symbols of China’s pre-communism culture, my parents set fire to a bunch.

Once, when I happened upon them burning, I got very excited and decided to help.

I opened one book case that was supposedly already cleaned out to find a thread-bound book set. I asked father what they were.

“A Dream of Red Mansions,” he said. One of the four great classical works of Chinese literature, which depicts opulent life and social structures during Ming and Qing dynasties, replete with intimate encounters between throngs of characters.

As they smoldered, I suddenly felt regret. Later, when I found another collection, this time “Water Margin” (another of the four classics), I didn’t make a peep and hid them away.

What we didn’t burn, we sold at the scrapyard. With both my parents accused of having anti-Communist Party affiliations, they couldn’t go personally, so they sent me.

When I showed up, the middle-aged man working there asked me whether my father was a member of the “black gang,” a common term in those days that referred to a variety of undesirables, from capitalists to counterrevolutionaries.

I was too afraid to reply, and he said nothing more.

To this day, I don’t know whether the scrapyard asked everyone about their family backgrounds or whether he just wanted to scare me in particular.

“Destroy the Four Olds” was like a hurricane — destructive and sudden, but also fleeting. About a year later, the unrest abated. Friends started to pass around what literature remained. When I went to visit my friend, he was lying in bed reading a big book. Upon seeing me, he blushed and scrambled to put it under his pillow.

Later, I looked and saw that it was “Red Mansions.”

During that period, people treated it as though it were banned pornography.

Father was born to a rural family in a poor, remote village in the Taihang Mountains, a range that spans Hebei, Shanxi and Henan provinces, as well as Beijing. There, his family was known for sharing one pot of rice between several households in order to save money to buy land together. But even amongst relatives, some, like my grandfather who was illiterate and honest, got the short end of the stick.

Under his uncles’ strict tutelage, father finished elementary school and got into middle school, but was forced to drop out because of the cost. Luckily, he got into the tuition-free No. 2 Baoding Provincial Pedagogical School in Hebei province.

Baoding Pedagogical was, at the time well known in northern China and home to lively discussions and societies. Many students belonged to either the nationalist Kuomintang or left-wing Communist parties, and they all wanted father to join. Dad had read nationalist leader Sun Yat-sen’s political dissertation, the “Three Principles of the People,” but was unimpressed. He also found those on the left “bizarre.” So even though he was a key member in a couple of local campaigns, such as pushing out the headmaster of a local school, in those days he never joined any one party.

But it wouldn’t last.

Dad taught for stints back in his home town as well as in Beiping, as Beijing was called during much of the 1930’s and 40’s. It wasn’t long before he became interested in language reform, then Marxism, Soviet Russia, and finally communism.

After secretly joining the Communist Party of China (CPC), he slowly made a name for himself, managing its Beiping Elementary School teachers’ branch. There, he organized activities including strikes and salary demands among the city’s teachers. The headmaster fired him on grounds of “CPC activity,” but he was reinstated following protests from teachers and students.

Eventually, he became responsible for the publicity work of the party’s underground municipal committee. By 1936, his status as a CPC member was an open secret.

One year later, the Marco Polo Bridge Incident took place, namely a battle between China's National Revolutionary Army and the Imperial Japanese Army. That, to many, marked the start of the Second Sino-Japanese War, or the War of Resistance Against Japanese Aggression, as it’s sometimes known in China. Father left for Shanxi province, a base of operations for the resistance against Japan. He stayed there for 12 years, rising up the ranks to later be spoken of in the same breath as legendary party officials hailed as “leaders from a young age.”

By the time he returned to Beijing in 1949, everything had changed.

I didn’t see father much after he was locked up.

We lived next to his workplace. One day, a speaker was set up. After that, day and night, it would blare out slogans and criticism of people. On one occasion, it announced that a public meeting would be held to denounce my father along with several others.

The office had a big field with a raised platform on the east end, where meetings were often held and movies screened. To the southwest overseeing the grounds was an old Western-style edifice, the former office of the section chiefs, then simply called the “old building.”

On the day of the meeting, I snuck up to its roof. It had a railing of sorts made of tiles. I was just the right height to peer over.

The field was full of people. They were holding little flags made of either green or yellow paper with phrases written on them. On the stage there was a big banner, and on its right, a table with a microphone.

Someone began to chant into the microphone.

From below, an uproar.

A string of detainees were dragged onto the stage from the left, each restrained by two individuals. One of the people brought out was my dad.

Because I was far away, I could only make out his frail body, not his expression. In front of his chest hung a sign that said “counterrevolutionary revisionist” and his name with a big “X” across it.

The captives stood bent-over in a line at the front of the stage. Whenever anyone tried to straighten up, the organizers would press down on their heads and hoist their arms from behind so that they remained hunched.

Father had had enough. Twice he tried to lift his head, and on the third attempt, he and his guards jostled. Before long, the three men fell on top of each other. People started to shout.

“Down with Gu!” they cried (Gu Xiaoyang did not reveal his father’s full name, only his family name). A wave of fluttering flags swept the field and anger rang through the grounds.

“If the enemy won’t surrender, then kill him! Smash in his head!”

Compared to the other detainees, dad’s “crime” was relatively minor. He was neither deemed a traitor nor a spy. Rather, he’d said publicly that he was against this type of show when such campaigns first began. But after he was named a “counterrevolutionary” and rounded up, he was the most bellicose; had the worst “manners.” And so they antagonized him above all others. By one colleague’s account, during those four years, father was publicly castigated on more than a hundred occasions.

After father was “deposed,” most kids in the hutongs (the historic alleyways that made up much of downtown Beijing at the time) didn’t actually pick on me, though a couple made insinuations for some laughs.

“What’s your family background?” somebody asked me once, then made allusions.

Another time, one of my classmates, who’s a bit dimwitted and had never said anything to me before, ran into my sister, who was 15 at the time.

“Down with Gu!” he shouted.

She slapped him and sent him packing.

One thing that’s obvious is that the kids who heckled me and took comfort in my misery were those of office workers at my dad’s job. The ones that helped me came from families of laborers and farmers.

It was telling. But of what, I’m not sure.

In all these years, regardless of what’s written on posters, what’s said at meetings, my family and I still believe that father did nothing wrong.

It’s because of dad’s example that I was able to keep my head up during that insane period in history and survive this kind of a childhood.