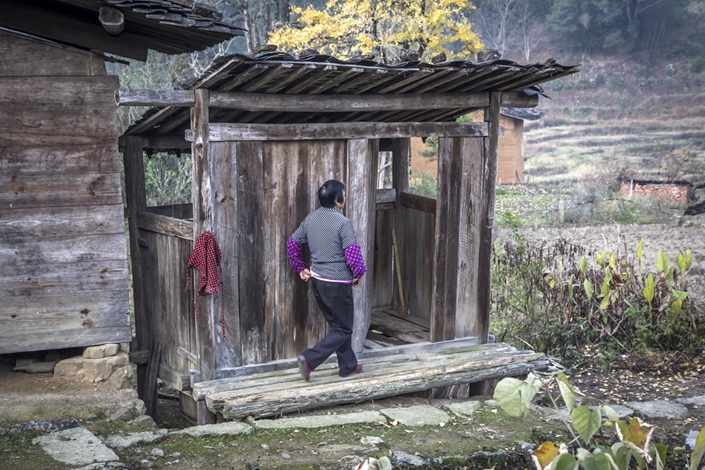 A villager heads into an outhouse toilet in Youxi county in East China’s Fujian province in December 2017. Photo: VCG

Smelly pit toilets in China’s poor villages have become a symbol of the gap between life in the country’s cities and countryside.

Now, the central government has pledged an additional 7 billion yuan ($992 million) to support China’s so-called “toilet revolution,” which is yet to make significant inroads into many rural areas.

The headline effort to improve toilet sanitation and access began in 2015, and in 2018, the annual meeting of China’s national legislature waved through a three-year action plan to refocus on household toilets in underdeveloped areas in the nation’s central and western regions.

In announcing the additional funding on Aug. 15, China’s Ministry of Agriculture and Rural Affairs (MARA) said more than 10 million household toilets had been renovated this year, and that the target for the end of the year was to pass 12 million.

The official plan holds that toilet works across China’s more affluent east and midwest should be upgraded and connected with effective waste disposal mechanisms by 2020. The central and far west regions have a lower bar of 85% of toilets being sanitary by 2020. Meanwhile remote and economically underdeveloped areas have a vaguer target of increasing the number of sanitary toilets.

While there is no detailed description of what a “sanitary toilet” is in the policy, the term is thought to refer to modern toilets that facilitate the removal of human waste and hence reduce the spread of disease.

In rural regions in China’s midwest and northeast, Caixin found so-called “dry toilets,” essentially pits with two boards and a three-foot wall of earth around them, remain common.

As part of the plan, China’s central government has instructed local governments to reimburse homeowners after they improve their toilets, rather than providing initial subsidies.

But one former government worker in the rural county of Yizhang in Chenzhou, Hunan province, told Caixin the household reimbursement of 1,000 yuan was far short of the typical cost of renovating a home toilet there, which could run to about 2,000 yuan. While he said sanitary conditions had improved overall, most household toilets in his village were “self-funded transformations,” he said, with “only a dozen or so” households completing works each year.

Several village officials told Caixin it was not clear how central government funding for the program was to be distributed. In April, an article in a magazine published by the state-run Xinhua News Agency said funds for rural toilet reform were being “supplemented by awards” from provincial and municipal governments, while local governments were receiving support from county governments. In some places, while old “unsightly” and “environmentally unfriendly” toilets have been demolished, new ones had not been built — with budgets to reconstruct them insufficient and the source of additional funding unclear.

One of the biggest issues for the toilet campaign is what to do with the waste.

In May 2018, Tao Yong of the China Center for Disease Control and Prevention outlined the failure to address rural hygiene issues in an opinion piece for the Communist Party-run People’s Daily Online. Even where sanitary toilets have been built, awareness and behavior have not changed, he wrote. The toilets themselves were also being insufficiently managed and excrement improperly handled, he wrote.

Last month, seven central government departments, including MARA, issued a notice requiring local governments to build systems for collecting waste and the promotion of integrated sewage pipe networks “where appropriate.” It also told them to engage services or cooperate with individuals and companies to work out how to best manage sewage treatment in their regions.