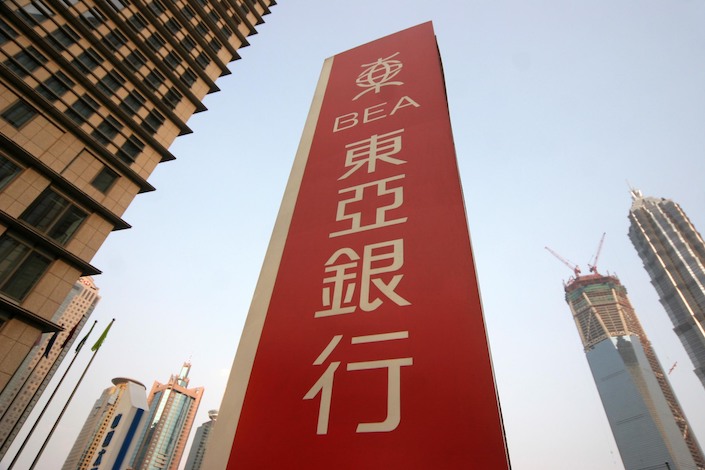 Bank of East Asia reported impairment losses of HK$5.01 billion during the first half. Photo: VCG

Net profit of Hong Kong-based Bank of East Asia (BEA) fell 75% in the first half as loan write-downs rose amid a property market slowdown on the mainland.

The bank attributed the sharp decline to impairment losses mainly from the property industry on the mainland. BEA’s net charge for impairment losses climbed to HK$5.01 billion during the first half, compared with HK$282 million a year ago, according to its filing with the Hong Kong stock exchange.

The charge was largely attributable to downgrades of four loans totaling HK$6.2 billion on the mainland amid worsening conditions in the commercial property markets outside the largest cities, the bank said.

BEA didn’t elaborate on the loans but said they were made to privately owned enterprises for property projects. The bank said in a filing that it sold part of the four downgraded loans, without providing details.

BEA, which focuses on the Hong Kong and mainland markets, in June warned of “significant post-tax impairment losses” of between HK$2.5 billion and HK$3 billion related to the four loans. The risky assets accounted about 4% of BEA’s loans to mainland-based customers, which totaled HK$149.7 billion by the end of 2018, a company report showed.

The bank also said in June that it was preparing a capital injection into its mainland branch to support its capital structure and business operations.

Brian David Li Man-bun, BEA’s co-chief executive, called the impairment losses and “one-off incident” and said he expected no major write-down in the second half. The bank adopted “proactive measures” to deal with risky loans in the first half, which will allow it to recover quickly and clean up its balance sheet, Li said.

Since 2017 BEA has adjusted its mainland business strategy by reducing corporate loans, especially to property industry customers outside top cities, as part of the risk-reduction efforts, according to Li.

Loans to retail customers accounted for 34% of BEA’s mainland-based loans, which stood at HK$143 billion as of June 30. The company is “satisfied” with the rising portion of retail business, Li said.

Li said the bank is now focused on big developers in top-tier mainland cities for property-related loans while seeking opportunities with cross-border customers such as trading and leasing companies. The bank is also stepping up cooperation with internet companies such as Alibaba Group-backed Ant Financial Services Group and online tourism agency Ctrip.com International to tap the online financial services market and new customers, Li said.

Excluding the loan impairment provision, BEA’s mainland business profit would have risen 43.8% from a year ago with revenue growing 36.2%, the bank said. Interest income increased 50.2%.

Li said he expected the bank’s mainland business to turn a profit in the second half and said it will be challenging to fully offset the first-half losses. The bank’s business on the mainland recorded a loss of HK$2.85 billion in the first half.

China’s recent interest rate reform of adding the more market-oriented loan prime rates (LPRs) as a new reference for pricing bank loans will put some pressures on BEA’s net interest margin as the system is set to lower borrowing costs for companies, Li said. But in the long term, the more liberalized interest-rate regime will help stabilize the bank’s profit margins, he said.