By Zheng Lichun and Ren Qiuyu 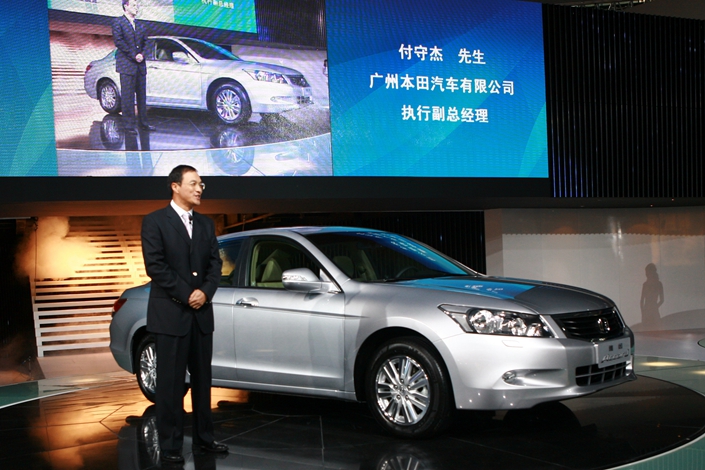 The former chairman of the state-owned Guangzhou Vanlead Group Co. Ltd. was convicted of accepting bribes and sentenced to prison in July, according to a just-published criminal judgment from the Guangzhou Intermediate People’s Court.

The judgment details how Fu Shoujie, who also held positions at state-backed automobile maker Guangzhou Automobile Group Co. Ltd. (GAC), accepted more than 10.7 million yuan ($1.51 million) in bribes — including expensive watches and a luxury car — in exchange for greasing the wheels of business deals around the country.

He was sentenced to seven years and six months’ in prison and fined 2 million yuan.

GAC has manufacturing joint ventures with Honda, Mitsubishi, Toyota and Fiat Chrysler and owns a number of Chinese automobile subsidiaries such as Trumpchi. According to the judgment, Fu served as executive vice president, chairman, and director of GAC Honda, director of GAC Mitsubishi, and as executive vice president and chairman of Vanlead Group between 2006 and 2017.

Vanlead is an industrial enterprise specializing in rubber and tires, chemicals, and the “productive service sector,” according to its website. Its subsidiary Wanli Tire is a supplier for the China-based joint ventures of international automobile makers such as Peugeot Citroen, Nissan and Honda.

The court found Fu began accepting bribes while at GAC Honda in 2006. It said he “green lit” two dealers looking to open Honda “4S” centers in Northeast China. As executive vice president, Fu had authority over 4S stores and directed the sales department to make the relevant approvals. The distributors did not need to submit materials, complete on-site inspections, qualification reviews, or other formalities, the judgment said.

In 2010, Pang offered Fu an apartment. Fu said he would rather buy it himself. Understanding the implication, Pang gave Fu 800,000 yuan that night. Fu’s wife proceeded to pay 830,000 yuan of her own money for the apartment and used Pang’s 800,000 yuan to purchase jade jewelry and watches.

Fu admitted that the 800,000 yuan was in return for his help in approving the nine 4S store locations.

While working at GAC Mitsubishi, Fu received a 1.3 million yuan bribe to influence the bidding for a project to build a manufacturing plant. At the end of 2014, Fu accepted another bribe — this time more than 4 million yuan — to help the same company construct a plant in Hefei, the capital of Anhui province. A middleman surnamed Xiao also benefited from both projects, receiving 2.7 million yuan in total, the court found.

The prosecution also accused Fu of using his position to assist and support the former president of a branch of the Guangzhou Merchants Bank, a man surnamed Sun, in soliciting banking business. In 2017, Fu accepted Sun’s gift of a Lexus car valued at 245,000 yuan.