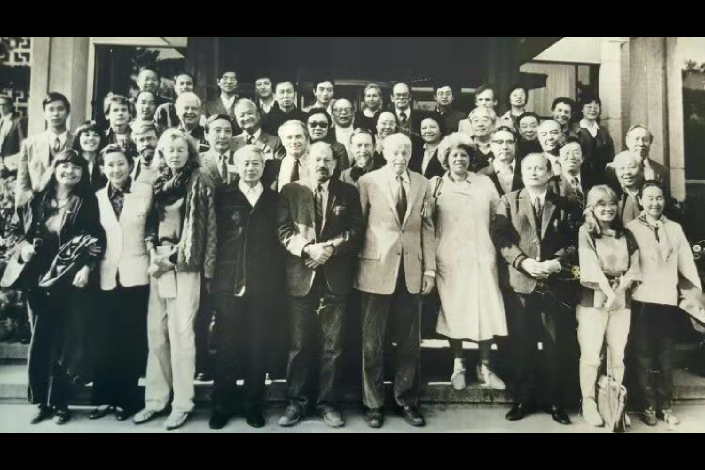 American and Chinese writers attending a meeting in Beijing pose for a picture on Oct. 23, 1984. In the first row are Leslie Marmon Silko (left), Francine Du Plessix Gray (third from left), Allen Ginsburg (fifth from left), Harrison Salisbury (fifth from right), Toni Morrison (fourth from right) and Maxine Hong Kingston (second from right). Gary Snyder is fifth from left on the second row. And Li Hong, author of this article, stands fourth from left on the back row. Photo: Courtesy of the Chinese Writers Association

The news of Pulitzer Prize and Nobel Prize winning writer Toni Morrision’s passing has shaken the literary world. Until the end of her life, she was always an important part of the cultural mosaic of American literature, representing African Americans and other minority writers.

I met Morrison in 1984, when she came to Beijing with an American writers delegation headed by Harrison Salisbury, along with Allen Ginsburg, Francine Du Plessix Gray, Gary Snyder, William Gass, Maxine Hong Kingston and Leslie Marmon Silko. The trip was organized and sponsored by the Chinese Writers Association and the University of California, Los Angeles. The subject of the conference was “The Sources of Creativity.”

I was 23 at the time, and was seconded as a translator and interpreter for the conference just two years after graduating from university, where I had studied English and linguistics. Morrison left a deep impression on me and all the people she met with her candidness, honesty, strong sense of humor and her murmuring of American slang. As a mother, she was always showing her care for her son Slade, whom she had brought with her.

In her speech to a mixed audience of writers, linguists and literature professionals at the International Club Hotel, Beijing, she said she had not initially intended to write because she believed that whatever she would decide to write had either been already written or would be written by someone else. However it was her lingering disgust — disgust that went beyond anger — over the contempt and indifference that African Americans encountered every day that made her believe that she should write.

Secondly, she neither trusted nor believed that the literature from the 1920s and 1930s could sufficiently express what she wanted to express, and the language writers back then used was totally inaccessible to her, as if they were writing for someone else.

Thirdly, she took such pride and passion in her work when she started writing, particularly after experiencing the civil right movement of 1960s, at which time she felt that she had developed a self-defense mechanism. That mechanism was based on her belief that her cultural heritage — coming from her ancestors through their religion, mythology and music, inherited generation after generation through narrative storytelling — was a born gift, a unique form of literature that would take years for people from other backgrounds to study and comprehend. At the age of 31, she finished writing her first novel “The Bluest Eye.”

Many American writers wrote about their 1984 trip to China. Many of them incorporated, in one way or another, what they had learned and experienced on that trip into their work, such as Salisbury in his “Long March, the Untold Story” or Gray’s travelogue “Travel Inside China, a State Of Perpetual Surprises.” When Jin Jianfan, a Chinese writer attended the 48th International PEN Congress in New York in 1986, he again met Morrison, who was still wearing the straw hat she had bought during her trip. Also, it’s always good to read Alexandra Cheney’s 2011 piece about Morrison, Kingston and Silko remembering China. As Cheney wrote, Kingston’s memoir “I Love a Broad Margin of My Life” and Silko’s “The Turquoise Ledge” were both influenced by that trip.

While most of what the writers wrote about China and its opening up was positive, some of them did express their concerns over the commercialism and Western influences overtaking the cultural heritage and traditions of which the country should feel proud.

When seeing entrepreneurs selling their wares around the scenic spots she visited, Gray wrote that while “the new capitalists have not begun to put their act together and tend to outbid each other outrageously” and “a genius for bartering has long been part of the national ethos." What is more amazing is the indiscriminate Western symbols of (contemporary Westernness) and those larger ethical values that are at the heart of China’s "national essence," In absence of ideology, and with youngsters only focused on individualism, with over a decade of oppressions and restraints caused by the Cultural Revolution, what was worrisome to Mrs. Gray was the pendulum might eventually swing back.

Also in many of the writers’ speeches, they showed their concerns over pollution caused by industrialization. As Snyder said in the closing of his speech, when he altered part of a poem written by a Tang Dynasty poet Du Fu (who lived from 712 to 770), saying “the country is still here while mountains of grass and forests are all gone,” instead of the original wording of “the country is broken while mountains of grass and forests are still here.”

Today, 35 years have passed and many of the participating writers have also passed away. However it’s the profound thoughts and ideas they have left behind in their great works of literature that will remain as the heritage of world literature. As Morrison said when she received the Nobel Prize for Literature, “We die, that may be the meaning of life, but we do language. That may be the measure of our lives.”

Li Hong worked in the Ministry of Culture from 1983 to 1990. He was at public relations firm Ogilvy for about a decade, and then was managing director and president of FleishmanHillard for 15 years. He is now a freelance business and communication strategy consultant. He published an article in 2013 reflecting on a close encounter with Margaret Thatcher.

A previous version of this story misstated the title of Morrison’s novel “The Bluest Eye.”