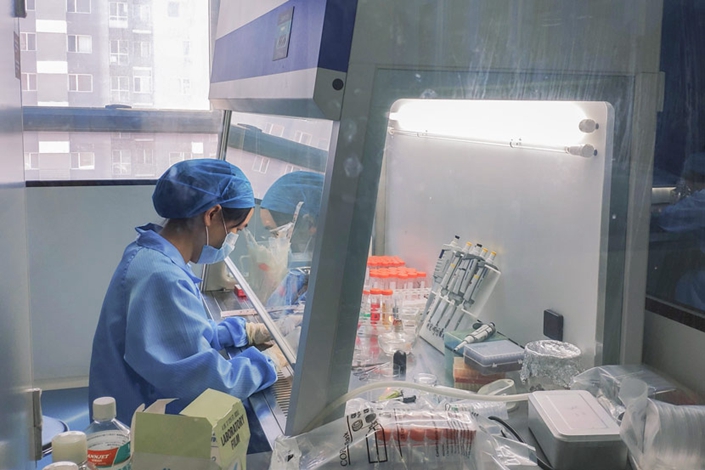 (Sixth Tone) — When her beloved dog Nini turned 10, Zhang Yueyan became concerned. How many years would she have left with her companion?

The news that Hollywood star Barbra Streisand had her pet cloned brought comfort; by the time Nini was on her last legs of life, Zhang could do the same. The only thing holding her back was that the cheapest option, a South Korean company, charged $100,000. But last year, a biotech company in Beijing, Sinogene Biotechnology Co., entered the market at about half the price. “Ever since, I didn’t fear her death anymore,” says 32-year-old Zhang.

Zhang is one of just a few dozen Sinogene customers so far. But the company sees great domestic growth potential. China’s dog-owners spent 106 billion yuan ($16.5 billion) on their estimated 50 million pets in 2018, a 20.5% year-on-year increase, and have spawned such lavish amenities as pet hotels and pet funerals. From 20 cloned dogs in 2018 and 20 more orders in the first quarter of 2019, Sinogene hopes to grow to duplicate 500 dogs annually within five years, serving Chinese and foreign customers. The company also clones horses and is developing more “biotherapy” products for pets.

The Chinese government is supportive, with its latest five-year plan calling for accelerated research into DNA testing and therapy. But lagging regulation has left large ethical blind spots, such as when, late last year, a Chinese researcher caused a storm with his announcement of the first gene-edited human babies. In June, new rules restricted the collection and use of human DNA in China, but cloning dogs and other animals remains unregulated — as it does in other countries — despite considerable moral issues.

But for Sinogene’s customers, love for their pups trumps any concerns. “Nowadays people treat their dog as a family member who is their spiritual sustenance or companionship,” says Zhao Jianping, the company’s deputy general manager. “When they lose their pets, they want their (pets’) lives to continue.”

The first step of cloning a dog is taking a DNA sample of the parent animal. Last August, when Zhang’s 19-year-old Nini fell seriously ill, Sinogene sent vets to collect a tissue sample from the dog’s rear leg. “It was a minor procedure. She didn’t even bleed,” Zhang recalls. Using the sample, Sinogene produced and stored identical cells that, after Nini passed away in October, the company could use for another Nini.

But the rest of the process involves many more dogs than just the old and new Ninis. Sinogene maintains a breeding base on the outskirts of Beijing with some 1,000 beagles — the international lab dog of choice. According to Zhao, Sinogene collects immature egg cells from three to five of these lab dogs, and then combines them with the parent dog’s cells to form embryos. One embryo is then implanted into a surrogate mother, who will successfully get pregnant half the time. In case of failure, this months-long process is repeated with another surrogate mother. On average, it takes half a year for a cloned puppy to be born, and they are then delivered to their owners after two months.

During a visit to Sinogene in early July, six surrogate beagle mothers and their eight cloned newborns were resting in the nursing room, each mother and their one to three puppies in their own 1-square-meter cubicle with water, food, and toys. Staff keep a close eye on the moms and pups. Twice a day, the mothers get to run around outside. We could not visit the breeding base, but Zhao says conditions there are “as humane as possible” and include two meals and up to three hours of playtime a day.

Zhao defends the use of lab dogs, saying “it’s the beagle’s mission to cooperate with experiments.” He adds: “Surrogacy is a very small trauma to dogs, which is similar to sterilization.” To become a surrogate each animal has a small incision cut into their abdomen and the cloned embryo is implanted directly into their fallopian tube. The abdominal wound usually heals within a week. Every dog is used as a surrogate twice, usually between the ages of 2 and 5, and then put up for adoption, Zhao says. Already some 200 beagles have found new homes. A majority of customers choose to adopt the surrogate mother of their cloned puppy.

In December, Nini’s clone was born, and in February, on Zhang’s birthday, Sinogene’s crew delivered the 2-month-old to her new home in Shanghai. “It was the best birthday ever,” says Zhang, petting her new pal on her lap. She’s decided to also call her Nini. “I only want one dog in my life,” she says. Initially, there were some doubts on whether the new Nini would age to look like the original, but after some months of growth and a haircut, the resemblance is striking, says Zhang. “They even sound the same and have the same twisted joint in their tails.”

At Shanghai Companion Animal Hospital, Dr. Yang Qiqing, who’s a veterinary specialist, says clients have been inquiring about pet cloning since last year. “Some pet owners’ feelings for their pets may be beyond the imagination of non-pet owners and vets,” he says. Yang considers cloning unnatural. “It can only restore the appearance, but it can’t restore the personality, memory, or emotion,” he adds. Sinogene’s Zhao says that clones will look like the parent dog and have the same general health, but that differences in how they are raised may cause their behavior to be different.

Yang says the surrogate dogs used for cloning may suffer some psychological pain. “It can only be compensated by providing more living space for surrogate dogs and increasing dog-walking time,” he suggests. Despite increased attention to animal welfare, China still lacks a law to protect their rights. “When we do have such laws and regulations, I think we should include provisions for cloning pets,” says Yang.

In March, China’s first cloned police dog, Kunxun, was born in Sinogene’s lab. She is the genetic copy of Huahuangma, a 7-year-old veteran of the Pu’er City police force, in southwestern China’s Yunnan province, who earned the nickname Sherlock Holmes because she “helped crack dozens of murder cases,” according to state-run newspaper China Daily. The hope is that cloning such top-rate police dogs will reduce training time and costs. “Cloning is the best way to pass on a good individual’s genes,” says Zhao. “If done in batches, the cost will be relatively low, and the quantity can increase rapidly.”

Hu Bao, a 31-year-old advertising manager in Shanghai, has decided to clone his dog. Tuoba, 3, is a rare mix of poodle and bichon, and Hu is concerned he might not be able to find another one. “She has a perfect size, she’s smart, she’s quiet at home, she doesn’t shed, and she doesn’t smell,” he says.

Hu pays close attention to developments in biotechnology and has read about Sinogene. He’s decided to clone Tuoba in 7 years’ time, when she’s 10. “I look at cloning from a rational perspective,” he says. “I’m aware that the cloned dog won’t be the same, but I know I will want dogs like Tuoba to accompany me for the rest of my life.” He adds: “If I had another dog, I’m not sure if they would be functionally as perfect as Tuoba.”

For now, Hu’s priority is saving up. Sinogene currently charges 380,000 yuan for a cloned dog, but Zhao says the price could come down in the future. “If the market is large enough, and our efficiency is relatively stable, then the price has room for adjustment.”

Back in Zhang’s apartment, three of her neighbors drop in to play with the new Nini. They joke that they have to be gentle and careful since she has cost a fortune. Zhang acknowledges that the new Nini won’t replace the old one, but the cloned puppy is helping her with the grieving process. “Now every time I flash back to the things I did with the old Nini, I carry the new Nini in my arms. I look at her and talk to her as if Nini is still here.”