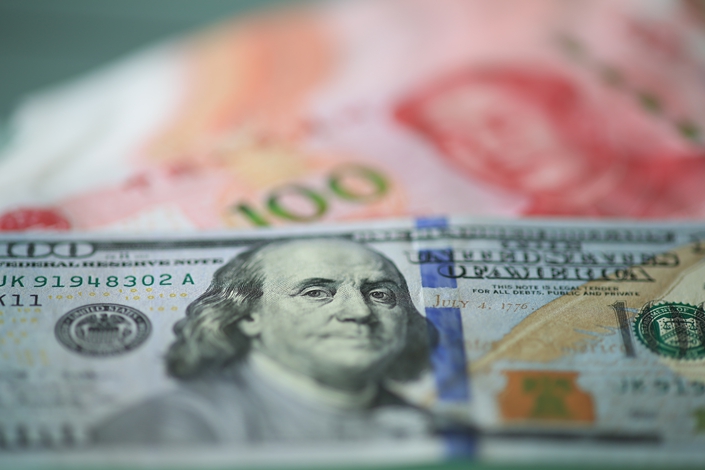 The yuan has stayed at a multi-year low level since Aug. 8. Photo: VCG

The Chinese yuan tumbled 1.19% against the U.S. dollar in four weeks as trade tensions with the U.S. escalated sharply, but market reactions so far seem calm.

The central parity rate of the yuan strengthened 2 basis points to 7.0570 against the dollar Monday, according to the China Foreign Exchange Trade System. A basis point is a hundredth of a percentage point.

Zhou Hao, an economist at Commerzbank AG in Singapore, said the sharp depreciation of the onshore yuan was largely driven by the offshore yuan, which usually has a bigger response to trade news.

China’s Ministry of Finance announced Friday that it will apply new tariffs of 5% or 10% on $75 billion a year of U.S. imported goods and reinstate a 25% tariff on U.S. automobiles. The move is a response to the President Donald Trump’s decision Aug. 1 to add a 10% tariff to $300 billion of Chinese goods starting Sept. 1.

Zhou said the market is basically calm with no panic transactions.

Monday’s move suggests that the market is able to digest the shock from trade news quickly and resume a low-volatility pattern, a forex trader said.

The yuan has stayed at a multi-year low level since Aug. 8, when it broke the psychologically important 7 yuan per dollar level for the time since April 2008. But data on banks’ forex transaction shows that market participants’ sentiment is stable.

China’s commercial banks sold a net $6.1 billion of foreign exchange in July, down 68% from June, data from the State Administration of Foreign Exchange (SAFE) showed.

At a news briefing Aug. 20, SAFE spokeswoman Wang Chunying said there are signs of a small net surplus in forex exchange transaction in August, indicating businesses are not rushing to sell U.S. dollars at highs to banks.

What China’s regulators are concerned about are unilateral depreciation expectations in the market, rather than whether the yuan breaks a certain psychological level, said Han Huishi, a veteran foreign exchange analyst.

As the trade war escalates, China’s central bank would carefully manage expectations on the yuan’s exchange rate but would allow the renminbi to depreciate slightly, UBS Chief Asia Economist Wang Tao pointed out. He said he expects the yuan to further decline to 7.2 per dollar by year end and to 7.3 in 2020.

Australian bank ANZ also lowered its forecast for Asian currencies, projecting that the rising trade tensions could lead to further depreciation of Asian currencies till 2020. But ANZ said it expects China’s monetary authorities to allow the yuan’s exchange rate to be more flexible, which would have spillover effects on other Asian currencies.