By Xiao Hui and Han Wei 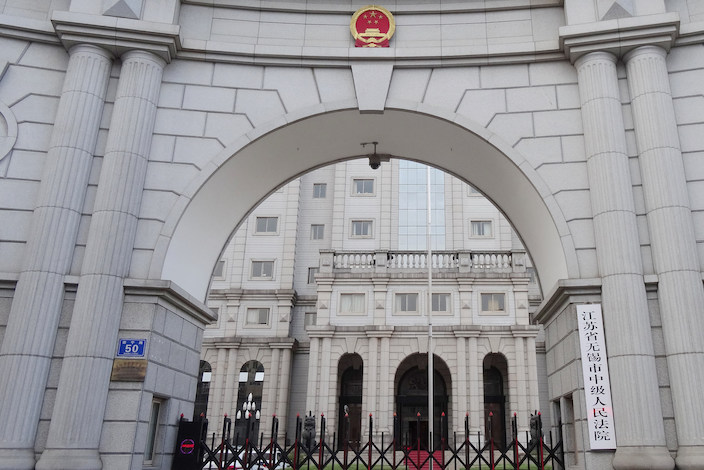 A former executive of the world’s largest bank by assets was released Tuesday after 26 months in detention as prosecutors dropped corruption charges, citing “changes in evidence.”

Xu Zhihong, a former general manager of Hong Kong-based CMB Wing Lung Bank Ltd. and a former senior executive of the Industrial and Commercial Bank of China (ICBC), was released from a detention center after a court in Wuxi, Jiangsu province, accepted prosecutors’ request to withdraw criminal charges against him, according to He Bing, Xu’s lawyer.

Xu, 56, was accused by Wuxi prosecutors of taking 2.38 million yuan ($333,000) of bribes between 2006 and 2010 to benefit several individuals at ICBC’s Hegang branch in Heilongjiang province in investment and bond underwriting deals, using his influence as the general manager of the ICBC’s financial market department. Xu was detained in Shenzhen during a trip from Hong Kong in April 2017 and formally arrested in June that year.

The Intermediate People’s Court heard Xu’s case in April 2019, during which Xu denied most charges against him. Xu admitted only that he accepted 50,000 yuan in 2008 from a deputy head of the ICBC’s Hegang branch.

According to China’s Criminal Law, taking bribes between 30,000 yuan and 200,000 yuan can be punished with less than three years in jail and is subject to a prosecution period of five years. That means the case was past the prosecution limit when he was detained, lawyer He said.

During the April court hearing, He argued that Xu was pressured and forced to admit to nonexistent charges during interrogations. There were inconsistencies between video and written records of the interrogations, He argued.

He told Caixin Tuesday that Xu was satisfied with the outcome and said he expects to return to his career in the financial sector “as soon as possible.”

Xu joined ICBC in 1995 and filled senior management posts in the bank’s accounting, capital operation and credit card departments. He was appointed general manager of ICBC’s financial market department in 2006 and oversaw rapid growth in the bank’s investment returns.

In December 2009, Xu resigned from ICBC for a new job in Wing Lung Bank in Hong Kong. The bank was acquired by China Merchants Bank in 2008.

People familiar with Xu’s case said Xu was targeted by investigators in the corruption probe of his former deputy Ma Xutian. Ma, a former deputy general manager of the ICBC’s financial market department, was placed under investigation in July 2016 and sentenced to nine years imprisonment in November 2018 for accepting bribes worth 16.9 million yuan.