How China Can Make Life Better for State-Supported Orphans 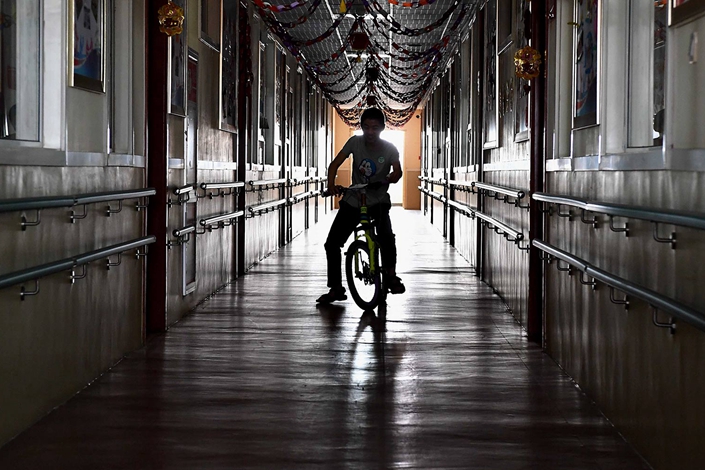 A boy rides a bike through a welfare home in Zhengzhou, Henan province, on June 1, 2017. Photo: Xinhua

(Sixth Tone) — Every year, thousands of Chinese children are left in the care of state-run orphanages by parents either unwilling or unable to support them. At present, there are 68,000 parentless children living in China’s welfare homes, 20% of them over the age of 16.

Roughly 10,000 reach the legal age of majority each year. But this rarely results in economic independence. Instead, my research shows that many orphans continue to live in welfare homes well past the age of 18, with some continuing to do so into their 50s.

China’s welfare system for orphans, which is largely a holdover from the Maoist period, was designed to cover their living and health care expenses from the cradle to the grave. Since the marketization reforms of the 1980s and ’90s, however, it has become a kind of poverty trap. Though it provides subsistence-level support to those in need, it often fails to equip them with the skills required to succeed in an increasingly competitive social and economic environment. At the same time, the benefits are often just generous enough to disincentivize eligible beneficiaries from looking for better opportunities elsewhere, inadvertently keeping orphans dependent on state assistance well into adulthood.

One of the girls I encountered in my fieldwork, 25-year-old Yang Yang — I’ve given her a pseudonym to protect her anonymity — did not have a formal job. Instead, she earned money doing temporary work in the physical rehabilitation department of the welfare home where she still lives. After she’d been abandoned as a child, a trash collector found her and took her in. Together they scavenged for food until she turned 12, when her foster mother became too ill to care for her, and she entered the welfare system.

Her welfare home provided Yang Yang — who has a physical disability — food, clothing, and health care, and it covered her education expenses through junior high. After she reached adulthood and began looking for work outside the home, however, she found herself hitting a wall. Her junior high school education didn’t qualify her for most jobs, and having spent her formative years in her welfare home’s small circle, she lacked both an understanding of society and any kind of familial or social support network.

Yang Yang’s story is by no means unique among older orphans. Although the state provides for their basic material needs, the high ratio of children to caregivers in the institutes means they lack regular attention from an early age. During the critical first 1,000 days of life, they struggle to form stable attachments and rarely receive positive feedback. And when they grow up, they have no one to tell them what’s right or wrong, or to encourage and supervise them in their studies. They often struggle at school, thereby limiting their future ability to gain employment and earning power.

The welfare home environment can also breed distrust of outsiders and result in an insular worldview. Yang Yang recalled how visitors made her feel like “elephants and monkeys in the zoo.” The director of the welfare home she lived in mentioned that volunteers would sometimes come to see the children. When they left, they would always say they’d come back, but never did. “The kids are used to being tricked, and it hurts them,” he said.

And because most welfare homes are located in remote locations, the children there interact only with their small circle of peers and rarely socialize with non-orphans. Yang Yang recalled that children from welfare homes would stick together when they were picked on or ostracized at school, joining up to fight back when they were bullied. But this only contributed to their isolation.

The combination of these experiences leaves many orphans sensitive to slights, and they struggle with low self-esteem. They often don’t know how to handle setbacks, solve problems, or truly understand themselves.

Together with their generally low education levels, poor social awareness, and lack of those crucial networks, it’s hard for orphans to find more than low-skilled, low-paying work. Even those who do find jobs outside the welfare home often still return after a time, where they subsist on their low wages and subsidies. Others flit from one job to the next, then eventually give up looking for work. At least at the welfare home, they know they’re guaranteed free food and accommodation — once these expenses are deducted from their salaries elsewhere, they’re not much better off than they were before.

The presence of this guarantee, however meager, can pose a psychological hurdle even for those capable of transitioning to a better life. Once an orphan transfers their household registration away from their welfare home, they permanently lose access to these benefits. If they lose their job or encounter other unexpected circumstances, they’ll have to face them on their own. Many orphans voluntarily give up job opportunities out of fear of what could happen without a safety net.

In order to cope with the pressure created by adult orphans staying in welfare homes, local governments have started to formulate policies that would support their transition into society. But implementing these policies is easier said than done.

For example, in 2009, Beijing stipulated that once orphans able to live and work independently become adults, the district or county-level government of the region they come from must provide for their resettlement. These localities are expected to offer a one-off subsidy of 150,000 yuan ($21,000) for each orphan. The money is not directly paid out but is used to cover housing, work, and temporary living subsidies. However, the policy fails to stipulate what should be done after this money is spent; many indeed returned to their welfare homes once this happened.

The eastern cities of Shanghai and Nanjing have each established specific policies to help orphans rent houses. However, because of the high rental prices in those cities, these policies involve large subsidies and are not always popular with urban residents.

Years of comfort and stability in state-supported institutions have accustomed orphans to having everything taken care of for them. Although they offer relatively comprehensive social welfare coverage, welfare homes have become an obstacle — supporting residents, but also incentivizing them to trade potential prosperity for guaranteed stability.

Based on my research, orphans who find jobs outside the welfare system are economically better off than those who work in short-term or temporary positions at their welfare homes. But if more orphans are going to find fulfilling work in society, they’ll need better professional support than they currently receive. In the eastern city of Qingdao, for example, the government provides career training to this group and the city government has instituted employment quotas for orphans.

Resolving the housing issue is also critical to helping adult orphans escape poverty. This is especially true of young men looking to get married. While housing stipends have proven unpopular with the general public in some cities, orphans don’t have a family to help them bear these costs. At the orphanage in which I conducted fieldwork, I only met one man who had successfully bought a house, gotten married, and had kids. At the least, orphans should be given priority access to affordable housing programs and other similar benefits.

Orphans deserve the same opportunities to improve their lives as anyone else. Few want to spend decades in a welfare home; they want to lead their own lives. Helping them realize this goal is going to take a reexamination of our current welfare policy, including a shift away from the current emphasis on basic material needs and toward a more productive model that sets orphans on the road to independence.

Shang Xiaoyuan is an associate professor with the Social Policy Research Centre at the University of New South Wales.

With contributions from Dou Zhenfang