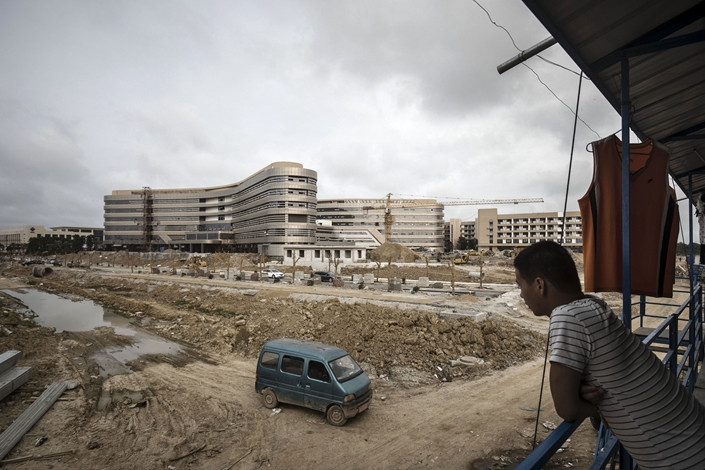 (Bloomberg) — China Evergrande Group, the property developer with dreams of becoming an electric-car powerhouse, is finding it’s picked an inopportune time to load up on debt.

The firm’s total borrowings swelled almost $20 billion in the first half to an eye-watering $113.7 billion — about equal to the market value of BHP Group Ltd., the world’s biggest miner. That’s spooked investors given about $53 billion of that falls due in the next 10 months and 75% within the next two years.

The debt blowout — the biggest for Evergrande in two-and-a-half years — was fueled as the firm poured billions of dollars into its electric vehicle ambitions, while additional curbs on the housing market slashed sales. It also comes as the government is tightening funding avenues for home builders as part of a drive to deleverage the economy.

“Evergrande faces its biggest liquidity pressure in at least two years,” said Zhou Chuanyi, a credit analyst at Lucror Analytics Pte in Singapore. “It’s more difficult to borrow money, and they have a lot of debt to repay. The two kinds of pressure are squeezing them at the same time.”

Lucror expects ratings companies to take negative actions on Evergrande, it said in a research report last week. Given the market environment, deleveraging seems unlikely at least in the second half of the financial year, analysts from Nomura Holdings Inc. wrote.

Representatives from Evergrande didn’t immediately respond to a request for comment.

Evergrande is already paying among the highest rates to sell bonds in the offshore dollar market. Of the 68 issues by Chinese real estate developers this year, the average coupon was 7.9%. Evergrande paid 10.5% when it sold $700 million of five-year notes in April. Those securities touched a record low of 91.6 cents on the dollar Friday.

The company’s 8.75% notes due 2025 fell 0.75 percentage points on the dollar Monday, according to credit traders, the biggest slide in a week.

Earlier this year, Evergrande’s billionaire founder and chairman, Hui Ka Yan, spent $1 billion of his own money buying the company’s bonds in a show of faith in the firm.

The company’s Hong Kong-traded stock slumped the most in seven months Thursday and another 0.6% Friday after Evergrande reported a 45% drop in core profit. The shares are down 31% this year, making Evergrande the worst-performing Chinese developer listed in the former British colony.

As well as failing to make good on its promise to deliver a first “pure battery” electric vehicle by June, Evergrande also missed its pledge to cut its net debt to equity ratio to 100%, according to Bloomberg Intelligence. Instead, it held steady as of the end of the half at 153%.

Evergrande has spent more than $3.6 billion since late last year on an array of EV-related companies, including an interest in a maker of in-wheel motors, a stake in a battery manufacturer, part of a Swedish firm focused on intelligent cars and even a car sales network. In March, it said it wants to be the world’s biggest maker of electric cars.

Last month, Evergrande said it plans to spend another 6 billion yuan this year on EV development and expects research and development costs to rise in the second half.