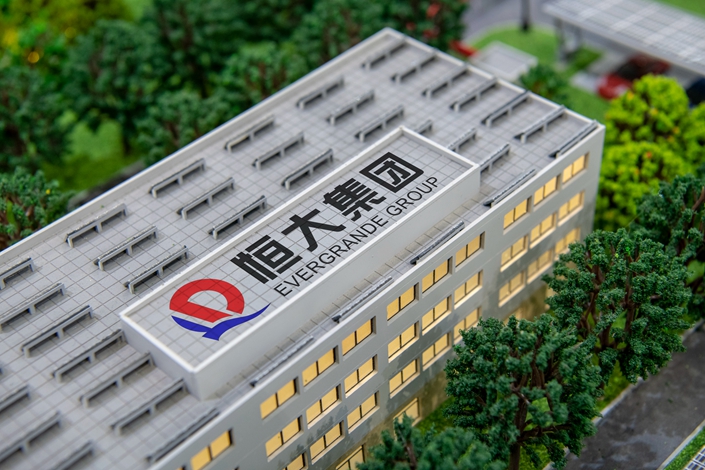 China Evergrande Group reported a plunge in sales for the first half of the year amid a cooling housing market, as the real estate giant sought to explain why it has postponed listing its core unit on the Chinese mainland.

The country’s third-largest property firm reported a net profit of 14.9 billion yuan ($2 billion) in the six months to June, down 51.6% year-on-year, according to the company’s interim earnings report released on the Hong Kong Stock Exchange on Wednesday. Revenue plunged 24.4% to 227 billion yuan.

Evergrande is the only one of China’s three largest developers by sales to report a drop in mid-year earnings. No. 1-ranked Country Garden Holdings Co. Ltd. and No. 2-ranked China Vanke Co. Ltd. both turned a profit, with the former’s profit growth increasing slightly while latter’s decreased. Evergrande blamed a 25% reduction in its delivered property area in the first half for the poor performance.

The dry-up in sales came as the central government continued efforts to cool China’s property market to rein in runaway residential property prices. Last month, the country’s central bank instructed banks to control property loans to homebuyers, as well as to tighten oversight of financing for highly leveraged large developers.

Evergrande’s contracted sales in the first six months of the year dropped 7.35% to 281.8 billion yuan. That was short of half of its full-year sales target of 600 billion yuan, according to the financial report.

But the company remains upbeat about its prospects for the full year. Evergrande will put $800 billion yuan worth of properties on the market in the second half of this year, and will meet its target if just 40% sell, Xia Haijun, vice chairman and president of Evergrande, said at the earnings conference.

The Hong Kong-listed company announced in late 2016 it would carry out a backdoor listing on the mainland, by injected almost all of the property assets held by its unit Hengda Real Estate Group Co. Ltd. into the Shenzhen-listed Shenzhen Special Economic Zone Real Estate & Properties Group Co. Ltd. The plan aims for a higher valuation on the mainland than in Hong Kong, as investors in the home market are said to be more familiar with the company.

But the listing has been postponed to date. Xia said the company is still waiting for the right time to list its core business unit, as the market faces headwinds from broader factors such as China-U.S. trade war — which has prompted mainland bourses to enter bear territory. Last year, Xia struck a similar tone.

Hengda has attracted a total of 130 billion yuan from three rounds of fundraising from investors such as Suning Electrical Appliance Group Co. Ltd., a subsidiary of electronic retailing giant Suning Holdings Group., to purchase a stake in the new Hengda when the backdoor listing is completed.

Postponing the listing has put pressure on Hengda as some investors have attempted to withdraw their shares. In July, Shenzhen Zhongrong Dingxing Investment LLP was to auction off 0.96% of Hengda, but later canceled the action.