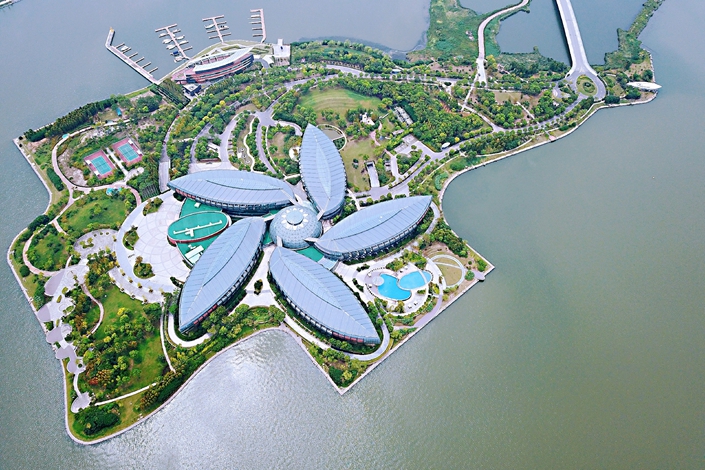 Free trade zones have continued to spread across China. Recently, the State Council decided to establish free trade pilot zones in the six provinces of Shandong, Jiangsu, Guangxi, Hebei, Yunnan and Heilongjiang. So far, China has set up 18 free trade zones, achieving full coverage of the coastal provinces, as well as the border areas, for the first time. Over the past six years, free trade zones have gone from being rare to commonplace. As local governments seek “competitive development,” “competitive opening-up” is expected to bring new momentum to China’s high-quality development. Each free trade zone and its home region should adapt to local conditions and make use of comparative advantages. In particular, these zones should focus on exploring institutional innovations that can be replicated elsewhere.

In September 2013, China established its first free trade zone in Shanghai. There have been multiple subsequent waves of free trade zone construction, which are referred to by some in China as “1+3+7+1+6” based on the number of zones set up in each wave. Focusing on issues such as investment, trade, finance and post-construction supervision, the State Council has issued a document putting forward various reform pilot tasks for the newly established free trade zones. Obviously, this is intended to encourage “competitive openness.” This is not only the inevitable result of China’s further expansion of opening up, but is also an intrinsic requirement for improving autonomy and initiative in the process of opening up.

Many Chinese and foreign economic experts regard the concept of “competitive development” under the framework of “political centralization and economic decentralization” as the secret behind China’s rapid economic rise. China’s economy has currently shifted from a high-speed growth phase to a medium-high-speed phase, and is facing the challenge of insufficient momentum. Shifting from “championing GDP” to “competitive openness” and promoting high-level openness through institutional innovation is a strategy that is expected to help China’s future development. In other words, the significance of the free trade zones lies not so much in the international context than in the domestic context. For this reason, local governments should adapt to local conditions when constructing free trade zones. The relevant parties appear to understand this, to some extent. For example, the overall plan for the construction of coastal Shandong’s free trade zone mentions “developing the marine economy.” This is a shift from past practice — different localities used to have near-identical industrial policies.

In the past few years, free trade zones have continued to grow and develop. In 2017, the Shanghai Free Trade Zone accounted for less than 2% of the city’s land area, but generated 25% of Shanghai’s GDP and 40% of international imports and exports. The establishment of free trade zones has also improved various economic indicators, including the number of newly registered enterprises, newly added registered enterprise capital, and newly added contractual use of foreign capital, in the regions where these zones are located. However, the role of the free trade zone in regional economies is weakening, and a certain “siphon effect” is even apparent in some provinces, where indicators including the number of industrial enterprises over a certain size and the total number of newly added jobs are either not improving or even declining. Of course, this may be attributable to the wider economic slowdown. This shows how new systems and mechanisms explored in free trade zones must be replicated and promoted elsewhere as soon as possible.

Moreover, the standards for measuring the success of free trade zones should also keep up with the times. China currently focuses on traditional indicators, but more attention should also be paid to the role of free trade zones in exploring institutional innovation. The Shanghai Free Trade Zone, for example, made preliminary explorations in terms of trade and investment facilitation, financial system innovation and government function transformation. The Shanghai Free Trade Zone explored the registered capital registration system, the system of issuing enterprise certificates before issuing more specific licenses, and the enterprise annual report publication system, which is worth promoting. The zone’s accumulated experience of dealing with cross-border use of the yuan also has wider applications. It is not difficult to see that the explorations made by the Shanghai Free Trade Zone bear the local characteristics of China’s largest industrial, commercial and financial center.

“Competitive opening up” will not happen simply because the central government calls for it. Some people have criticized the construction of domestic free trade zones as more driven by local governments all wanting to do what their rivals are doing. This is not a groundless criticism. However, the construction of free trade zones should not be confined to certain areas. There are nearly 300 free trade zones in the United States. The number of free trade zones in China is currently far from excessive, despite what some people claim. How should the wake-up call be delivered once each locality has its own free trade zone? Will the zones become mere political achievements? In some localities, official thinking is rigid, the business environment is bad, the government has a weak awareness of its service role, and long-term complaints by businesses have chased away foreign capital. It would be better for these places to improve their business environments before trying to build free trade zones.

The construction of free trade zones involves the major issue of regional inequality. Over the past 40 years of reform and opening up, the development gap between different regions has grown larger and larger. To achieve balanced development, China cannot rely on preferential policies and transfer payments. Instead, the country’s eastern, central and western regions must adapt to local conditions and fully exploit their comparative advantages. Letting all localities pursue “competitive opening up” is the right path. The fifth meeting of the Central Financial and Economic Affairs Commission has also pointed out that, to promote the coordinated development between regions under new circumstances, it is necessary to adjust and improve the regional policy system in accordance with objective economic laws, exploit the comparative advantages of various regions, promote the rational flow and efficient concentration of various factors, and enhance the momentum of innovative development. These principles undoubtedly apply to the construction of free trade zones.

“Competitive opening up” ultimately requires linkage between the central and local governments. Since the reform and opening up, many institutional problems require across-the-board solutions, and localities are unlikely to achieve breakthroughs on their own. This is the reason for the low effectiveness of pilot projects like Wenzhou’s comprehensive financial reform zone. The central government must also determine which results of local exploration are reproducible and worth promoting. Perhaps the bigger challenge for the central government is to eliminate lazy policy-making, and to let local officials cast aside their current constraints and bravely innovate.

China’s free trade zones had their origin in the U.S.-China Bilateral Investment Treaty and the external pressure of the Trans-Pacific Partnership Agreement. Today, the former has been put on hold while the latter has changed beyond recognition, and the U.S.-China trade war continues to rage. Times have changed in a regrettable way. However, China does indeed have 18 free trade zones. They shoulder the mission of “competitive opening up” and try to continue the new chapter of “leading reforms with openness.” They will soldier on no matter how hard the road ahead is.