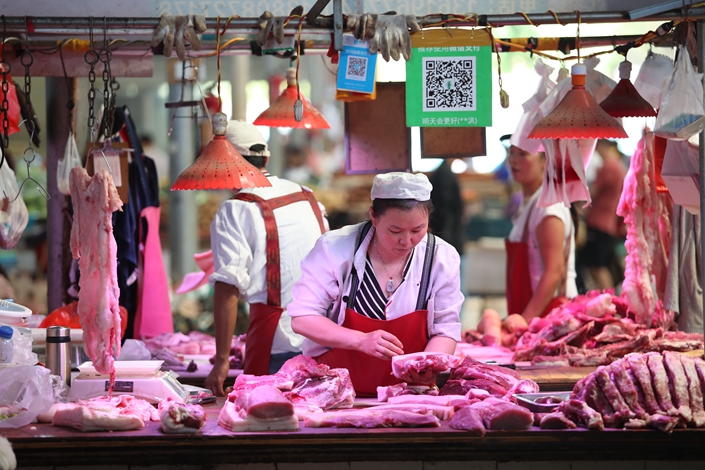 Pork has become an urgent problem, as the main meat consumed by people in China. Recently, the supply of live pigs has been seriously inadequate, and pork prices have repeatedly reached new highs. The decision-making levels of government have attached great importance to the issue. The executive meeting of the State Council on Sept. 4 made specific arrangements in this regard. China is about to celebrate a series of holidays — Mid-Autumn festival, National Day, New Year’s Day, Spring Festival — that create a peak time for pork consumption. We hope that the government’s response can curb the decline in pig production quickly, achieve restorative growth, and eventually return to a normal level. The key is to stabilize the anxiety in the hog raising industry while seeking practical and realistic treatments for swine fever.

According to data from the Ministry of Rural and Agricultural Affairs, average price of lean, white pork meat in 16 provinces reached 35.63 yuan ($5.13) per kilogram between Aug. 26 and Aug. 30, up 9.3% from the previous week and up 92.3% from a year earlier. The pork supply has hit a 10-year low. The gap in China’s pork supply is so large that it cannot be supplemented by the international market. This round of pork shortage has been caused by multiple factors and is closely related to the “pig cycle,” African swine fever, and measures against restrictive feeding. To cope with it, we need to take more measures on the supply side. In the short run, efforts should be made to expand market supply while in the long run, efforts should be focused on building a more efficient and more resilient pork industry.

There must not be any time delay in managing the outbreak of African swine fever. In just one year, the virus spread throughout the country, more rapidly than in other countries. In dealing with disasters, we often exaggerate, but this time we underestimate the challenge. Starting from farms, there are many links such as quarantine, transportation, slaughter, refrigeration, processing, and so on. Huge loopholes exist everywhere and concealment is rampant. Even veterinary stations, traffic quarantine and designated slaughterhouses that were originally used for prevention measures become places where the virus spread. The fever thoroughly exposed the huge gaps in the animal epidemic prevention and control system, and the lesson is very painful — no less painful than that of SARS. We must firmly resolve to make long-term contributions and thoroughly solve the problem from the institutional point of view. Though epidemics are sporadic, it should be the norm for the “world’s largest hog-raising country” to be able to prevent and control it. But it was not the case.

Governance of swine fever is not just a scientific issue, but also a national governance issue. Since African swine fever has colonized China, it is necessary to prepare for a long-term battle. Otherwise, encouraging hog-raising would only result in the deaths of more animals.

To ensure supply, we must respect the pig market and production cycle. Recently, several provinces have introduced stable production and supply schemes for live pigs. Support measures such as compulsory culling subsidies for swine fever, temporary loan discounts, rewards for transferring swine out of the county, increasing pig insurance coverage, and subsidies for breeding pigs have been introduced. Relying on policy support may alleviate temporary shortages, but it must also comply with the laws of pig production. There is a cycle for breeding that we cannot ignore. We should be cautious and pay special attention to the pace of the supporting policies.

It must be pointed out with deep sorrow that human factors played a role in this round of pork shortages. The unreasonable regulations prohibiting and restricting the breeding of live pigs is responsible for the result to some degree. It is said that the original intention of designating hog-raising zones and pig-free zones was to protect the environment, but the complex relationship between them should be supported by convincing scientific research. What is more serious is that during implementation, the restrictions are constantly being strengthened. In some places, land for new farms is basically never approved and they just keep demolishing and never building. Even standardized large-scale pig-raising enterprises are banned. What should be reconsidered is why the motivating force of “rule by prohibition” is so strong. Even when the supply of pigs was reduced, such behavior was not weakened. On Aug. 21, the State Council made clear that the local governments should immediately abolish the prohibitions and restrictions on pig-raising beyond laws and regulations. We look forward to the immediate effects of this request. Environmental pollution caused by pig farming does occur, but there is no need to resort to blanket bans with the level of science and technology available in China today.

Large-scale professional breeding is a road that must be taken, and the chains of the modern pig industry are the foundation of risk prevention. The environmental pollution from free-range farming, as well as its weak ability to manage risks, have seriously restricted pig production. Over the years, though achievements have been made in large-scale farming, the overall proportion of large-scale farming is not very high. In 2018, there were about 26 million pig farming households in China, mainly small retail households. The modern pig industry is a distribution of regional interests in the aspects of breeding, transportation, slaughtering and processing. At present, because pig farming often relies on subsidies and lacks substantial tax contributions, while slaughtering and processing can contribute to taxation, which makes it easy to form a difference in the interests of slaughtering and processing in the main producing areas. To change this situation and realize that live pigs must not be transported out of the local area, we need to comprehensively implement adjustments to fiscal and taxation policies, as well as build smooth and complete logistics. We have noticed that the central government also emphasizes the importance of providing production services for pig farmers, promote their organic connection with modern farming systems, and avoid compulsory withdrawal. This is a pragmatic and wise move.

Thanks to the reform and opening policy, China has long said goodbye to the “shortage economy.” This round of pork pressure is impressive. Guaranteeing the pig supply and stabilizing pork prices is a defensive war: We must not only face up to the challenges of African swine fever and practice animal epidemic prevention and control, but also upgrade the modernization of the pig industry and build a solid market foundation. It would be highly beneficial for us to make use of the management of swine fever to promote the professionalism of China’s pig industry. In addition, transparency should be strengthened, and the difficulties that the government faces and the countermeasures taken should be made clear to the public. This is the best guidance for public opinion. The pork crisis also reflects some of the challenges facing the national governance system and governance capacity, which will be the themes of the Fourth Plenum of the 19th Central Committee of the Communist Party of China to be held in Beijing next month. The public certainly has high expectations for it.