Photos and text by Ding Gang 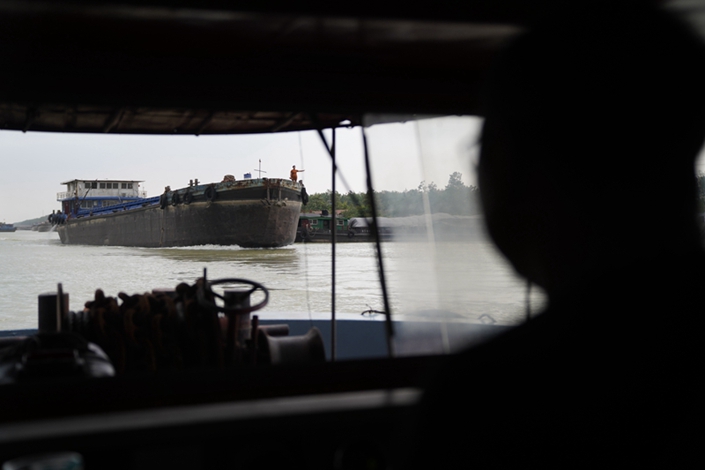 Near the Gaoliangjian gate in Huai’an, East China’s Jiangsu province, pilots must be very careful of empty boats that are easily blown about by strong winds. Hu Yuyou yells at the incoming boat’s crew to avoid a collision. Photo: Ding Gang/Caixin

As Hu Yuyou frantically shouts instructions, his wife rushes out to the bow, waving to the boat opposite. River shipping is rarely this dangerous, but the worst drought in decades has left rivers in East China at their lowest level for decades.

This has created congestion on canals, as vessels loaded with cargo crowd the gates to locks, waiting for them to fill with enough water so they can travel along the waterway.

As Hu searched for a place to stop, a boat without cargo appeared, moving in the opposite direction as a strong wind began to blow.

“Empty boats have a shallow load, so if they are not moving fast enough then they are easily blown by the wind in the channel,” Hu explained.

The boat’s raised bow was drifting toward him, carried by the strong wind. Hu pulled out his radio to make contact with the empty boat’s crew to get them to reverse as he turned his boat’s rudder to steer away. The boats missed each other by a few meters, and the wake from the empty boat splashed onto Hu’s boat. Hu wiped his forehead with a towel.

Hu, now 54, has been working on boats since he was 17. He has manned all kinds of vessels, including both small boats and enormous ships carrying thousands of tons of weapons. On this trip, he and his wife are traveling north up the Grand Canal that connects the cities of Beijing and Hangzhou and the Yellow and Yangtze rivers. They are transporting 1,200 tons of cement from Wuhu, Anhui province to the town of Shuanggou in East China’s Jiangsu province.

He has been transporting goods on the Beijing-Hangzhou canal for decades and is very familiar with the route, but he has never seen any of the difficulties that they experienced this year. What would be a one-week journey in normal conditions has been delayed by months as they wait for the water levels to rise.

After stopping, Hu calls the local villagers about the Gaoliangjian gate, the final lock they need to cross before reaching their destination. Hanging up, he sighs — they have to wait again, along with 500 other boats in line, for another three days. They had only just passed through the Huai’an lock, for which they had waited a week.

Waiting to cross is tedious and uncomfortable in the summer heat. The sun bakes the iron boats and the cabin temperature hits 40 degrees Celsius by noon. In order to turn on the air conditioning unit, they need to turn on the noisy diesel engine for electricity.

Hu and his wife are also under financial pressure. Four years ago, they spent1.5 million yuan ($210,000) to buy their cargo ship, borrowing 700,000 yuan from the bank. They have yet to repay more than half of that loan — and shipping delays this summer means that it will take them even longer.

The delays also mean that the ship crews need to replenish their food and water supplies. They paddle boats to the nearest town or wait for a local to paddle a raft out to them. Zhang Guobao, 52, has been rowing out to stranded boaters since he was 19. The small raft he used when he began has now been upgraded to a large cargo boat with a loudspeaker on the bow, and he carries mineral water and fresh produce on board. He hired his relatives to help out. He estimated that in July this year, there were 5,000 to 6,000 ships stranded at the Huai’an lock.

Three days later, Hu’s boat finally reached its destination through the Gaoliangjian gate. He feels he is getting too old for this profession. “Running boats is too tiresome for us now,” he said. “Our kids are looking for jobs onshore, they don’t like being on a boat.”

Looking at photos of their grandson on Hu’s cell phone, the couple smiles.