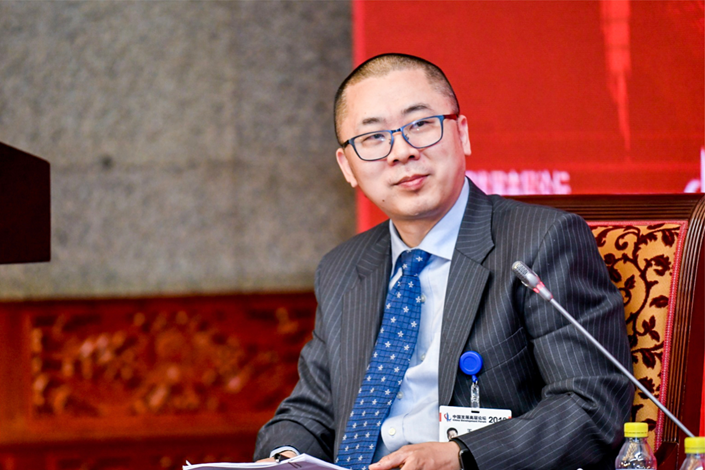 In this interview with Stars, a Swiss nonprofit organization that promotes networking by young global business leaders, Caixin Editor-in-Chief Wang Shuo talks about pressing business and economic topics he has observed in China, including the country’s financial and social credit systems. The financial credit system’s purpose is clear, as it strictly collects financial data to provide more centralized information about individuals’ and companies’ creditworthiness. But Wang argues the purpose and structure of the social credit system is opaque and lacks proper justification for broad and undefined data collection under its umbrella. The interview was conducted by Stars alumnus Markus Herrmann, co-head Asia program, Swiss Forum on Foreign Policy, on the sidelines of the Stars China symposium in Chengdu earlier this year. Caixin is republishing this interview originally published on stars’ website. It has been edited for style and clarity.

Markus Herrmann: What is unique about China’s digital economy?

Wang Shuo: China has built a globally unrivalled digital “super-platform” relying on the most advanced mobile payment infrastructure, unlimited data collection possibilities and business models with seamless integration of on- and offline.

What are your concerns?

The key players of this “super-platform” leverage their dominance and underlying capabilities in one sector to horizontally expand and take over one sector after another. This is typical monopolistic behavior. In any country with a strong anti-monopoly tradition or institution such a development is not conceivable. Imagine Google wanting to become another Amazon, Google would not have such an idea in the first place. Further, given the US’ anti-monopoly framework, such explorations are in fact nonstarters. In contrast, leading Chinese digital players will do exactly this.

Will this spree also continue overseas?

No, I don’t think this will be possible. Alibaba, for instance, will be strong in some sectors in overseas markets, but it is impossible that it re-applies its model comprehensively to overseas markets to take over the world. First, other countries have an anti-monopoly framework, and second, political obstacles would also arise if a foreign player is too dominant.

Turning to the Starbucks-Luckin stand-off, what are your thoughts?

I know both companies intimately and I also regularly drink coffee from both brands. I give you a practical example: when I compare their two mobile apps, Luckin is doing unbelievably better than Starbucks from a Chinese user’s perspective. The Starbucks app is too slow, too cumbersome and too complicated. If Starbucks’ business model innovation in China is betting on its mobile app, it is definitely doing a very bad job.

Are many foreign firms struggling with business model innovation in China?

The biggest challenge for them is to deal with the complete lack of business trust in the Chinese market. Foreign firms usually respond to this challenge with inefficient control systems: processes, long reporting lines, standards and guidelines. But in the Chinese market, business decisions need to be taken very fast. Mature markets may be steered with three-year plans, but in China competing in the daily business battlefield is based on weekly or monthly plans. Overall, foreign companies wanting to innovate in China are caught in a very awkward position: they cannot let go of control, but — as a result of this — are not nimble enough to compete with the fast emerging and ambitious local Chinese companies.

Referring to your comment about “unlimited data collection possibilities” — can you shed light on what is going on regarding the China’s social credit system?

There are two credit systems. One is clearly defined and coordinated by the People’s Bank of China (PBOC). It deals with financial credibility and strictly collects relevant financial data in order to provide more centralized information about the creditworthiness of individuals and companies in China. It is a financial credit system and can be useful when applied to bank loans. Similar systems are also in place elsewhere.

What is the second system?

The second system is coordinated by the National Development and Reform Commission (NDRC) and local governments can participate. Its purpose and structure are opaque, and it collects data much more broadly. Given the omnipresence of our mobile phones, it is easy for the Chinese government to know everything about our daily behavior. This system applies to both companies and individuals, with the former generally caring less about privacy. But regardless, to me it is not clear what the government’s intentions are. I understand the purpose of the financial credit system, but I don’t get it for the social credit system.

Did Caixin raise this topic?

Caixin has tried to help and ran a cover story about the social credit system. We made arguments in favor of the PBOC model with its clear definitions and terminology, while highlighting the difficulties regarding the social credit system, in particular the lack of justification for the broad and undefined data collection. Unfortunately, I am pessimistic

that the rigor adopted in the “PBOC approach” will be replicated in the implementation of the social credit system.

Turning to trade topics, how will the Sino-US trade conflict play out? How much is about trade rebalancing versus structural changes on the Chinese side?

I personally think that the intellectual property and technology transfer topics are in fact not so hard to solve, because they touch rules which are clearly and increasingly also in the interest of China. I think the most difficult part is about Chinese state subsidies provided to its state-owned enterprises (SOEs) and for other uses. Having said this, there is surprisingly little information that we are hearing from the ongoing trade negotiations and therefore, it is very hard to make solid analyses and predictions.

Is China considering to join the Comprehensive and Progressive Agreement for Trans- Pacific Partnership (CPTPP)?

There are indeed arguments and lobbying efforts ongoing that favor China to consider accession to the CPTPP. First, it is a good measure to continue the opening up and reform efforts for the Chinese economy. Second, it could also be a good tactical move in the context of the Sino-US trade conflict. It would strengthen China’s position in that conflict. Caixin has run a prominent editorial on this topic promoting that China should do so, but we have not received any government feedback signaling lack of dynamics towards that direction.

What is China’s position on the WTO and a broadly invoked need for reform?

The Sino-US trade conflict has made abundantly clear that the current WTO is not functioning and that it needs to be reformed and made stronger. A strong and effective WTO is clearly also in the interest of China and China will be willing to put in more efforts to help reform the WTO, including e.g. the working group with the EU. However, it needs more countries to join this effort and unfortunately the U.S. seems uninterested in this. If everyone loses hope on this topic, everyone will be on its own which is a very bad, but — unfortunately — an increasingly likely scenario.

On China’s domestic economy, can you talk about the concept of “competitive neutrality”?

There is a fundamental difficulty to reconcile Chinese SOEs and Chinese privately owned companies (POEs) within the Chinese market. Dealing with this represents a huge challenge to the Chinese government and everyone who worries about the future development of the Chinese economy. Competitive neutrality is the newest effort to find a framework to regulate their relative relationship. This framework tries to ignore the ownership structure and shifts the focus instead to rulemaking around behavior of the market participants.

This does not sound new.

I agree, it is nothing new. There have been debates about this topic already for over 20 years since the last substantial SOE reform when many large SOEs were a burden to the state and therefore dismantled in the course of the reforms. Since China’s WTO accession, the remaining SOEs have been enjoying less competitive pressure in a fast- growing economy. However, given their strong business performance, their preferential treatment has become an issue. This new concept of “competitive neutrality” is trying to put SOEs and POEs on a more equal footing without touching the more sensitive issues. In the words of a Chinese idiom, “it’s the same old wind packaged in a new bottle.”

Finally, how would you explain Caixin’s uniqueness to readers outside of China?

We are honest. Or, put differently: Caixin is following the best international journalism practices in the Chinese environment. It is and will continue to be the best source inside China for all people who want to learn more about China.