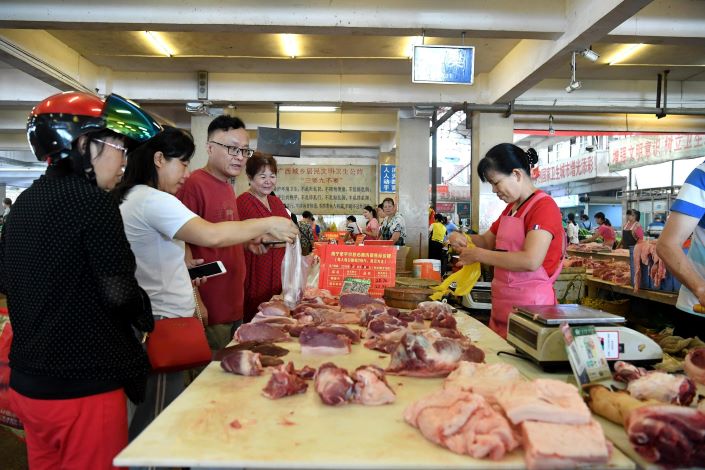 (Bloomberg) — China wants to boost purchases of pork from overseas, including the U.S. and European Union, as the government grows increasingly concerned about soaring prices, according to people with knowledge of the plans.

The need for more pork coincides with a potential move by Beijing to ease trade tensions with Washington by resuming imports of U.S. farm goods ahead of talks in coming weeks. Some of the pork would be added to state reserves, according to the people, who asked not to be identified because they’re not authorized to speak publicly. There’s no official target, though total imports of 2 million tons for the year would be considered ideal, one of them said.

Beijing has become increasingly vocal about the need to boost the country’s pork supplies as herds are decimated by African swine fever. Leaders are fretting over how record prices of the staple food will impact economic stability and potentially mar celebrations for the 70th anniversary of the People’s Republic of China’s founding on Oct. 1. No fewer than six ministries, including the top state planning agency, announced measures on Wednesday to mitigate the impact on pork prices, which surged 47% last month.

China bought about a million tons of pork so far this year, of which about 87,771 tons were from the U.S., according to Chinese customs data. Even if purchases tripled, imports would only make up about 6.6% of domestic supply, Citigroup Inc. said in a report on Sept. 12. The world’s biggest consumer of pork accounted for about half of global demand last year, while it produced about 54 million tons, Citigroup said.

“When U.S.-China trade talks warm up, China should be ready to buy significantly more from the U.S.” Citigroup economists including Xiangrong Yu wrote. “However, an increase in Chinese demand may move up global pork prices given its scale.”

More imports are only going to go part of the way to addressing shortages. The country is likely to see a 10-million-ton pork deficit this year, more than the roughly 8 million tons in annual global trade, according to Vice Premier Hu Chunhua. That means the country will need to fill the gap by itself, he said.

Just over a year has passed since the world’s biggest hog producer first reported an outbreak of African swine fever. The highly contagious disease quickly spread throughout the country despite efforts to control it. China, which had more than 400 million pigs before the outbreak, has seen herds tumble by about a third with farmers afraid to restock for fear of a second contagion.

While the disease is now endemic in some parts of China and has spread to neighboring countries including Laos, Vietnam, Philippines and Mongolia, Chinese authorities have been calling on the nation’s farms to rebuild their herds with offers of subsidies.

Vice Premier Hu recently called the situation “much grimmer than we have been informed,” and told officials to take immediate steps to increase supplies.

After data on Tuesday showed a 20-percentage-point gain in pork prices from the previous month, the government has been increasingly public about the need to address prices. The National Development & Reform Commission on Wednesday said efforts to ensure supplies and stabilize prices will include releasing frozen pork from reserves to cover upcoming holidays, including next month’s anniversary celebrations.

Pork production in the European Union and Brazil, meanwhile, is expected to rise to record levels, with exports climbing to help fill the supply gap emanating from China, according to the U.S. Department of Agriculture.

But one Chinese government researcher says the shortfall is too vast to be made up by imports and prices simply have to rise to cap demand.