By Guo Yingzhe and Zhang Qi 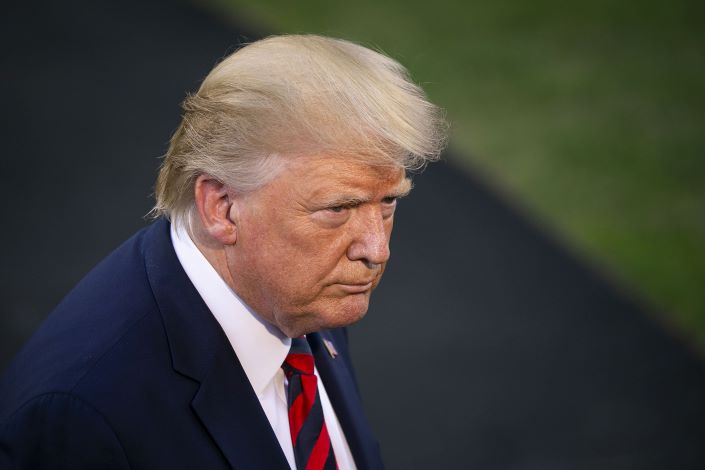 U.S. President Donald Trump listens while speaking to members of the media before boarding Marine One on the South Lawn of the White House in Washington, D.C., U.S., on Thursday, Sept. 12, 2019. Trump said he would be open to an interim trade deal with China but would prefer a lasting deal. Photo: Bloomberg

Stock markets reacted positively after U.S. President Donald Trump said Thursday he’d consider an interim trade deal with China despite preferring a permanent one, as officials in the world’s two largest economies continue to seek a solution to the ongoing trade war.

Asian investors seemed to warm to the news on Friday. Hong Kong’s Hang Seng Index opened 135.9 points or 0.5% up in the morning and closed 0.98% higher, while Japan’s Nikkei 255 closed 1.17% higher. Chinese stock markets are closed on Friday due to the Mid-Autumn Festival public holiday.

Trump told reporters before leaving the White House for a Republican Party retreat: “I’d rather get the whole deal done ... If we’re going to do the deal, let’s get it done.” The President added: “I see a lot of analysts are saying an interim deal — meaning we’ll do pieces of it, the easy ones first. But there’s no easy or hard. There’s a deal or there is not a deal. But it’s something we would consider, I guess.”

His comments echoed a Bloomberg report earlier Thursday that Trump’s advisers have discussed postponing or abolishing some tariffs on Chinese goods as a part of a limited trade agreement in exchange for “Chinese commitments on intellectual property and agricultural purchases.”

After several escalations in the trade war that has taken a toll on bilateral trade and roiled the global economy, both sides are telegraphing their goodwill ahead of upcoming negotiations in Washington in early October.

On Friday, the Chinese government said it will support companies in purchasing “a certain amount” of U.S. soybeans, pork, and other agricultural products, and also exempt those products from tariffs, state news agency Xinhua reported (link in Chinese). The government also said it hoped the U.S. would “be as good as its word, keep its promises, and create beneficial conditions for the agricultural sectors of both countries.”

On Wednesday, Trump tweeted that a tariff rise from 25% to 30% on $250 billion of Chinese goods, originally slated to take effect on Oct. 1, will be postponed to Oct.15, framing it as a “gesture of goodwill” while China celebrates the 70th anniversary of the founding of the People’s Republic.

The Chinese government responded with a similarly upbeat message about agricultural purchases, with Gao Feng, a Ministry of Commerce spokesperson, saying at a Thursday press conference (link in Chinese) that China welcomed the delayed tariff hike and confirmed that Chinese companies have resumed purchase enquiries about American agricultural products, including pork and soybeans. Working-level trade teams from both sides will meet soon to lay the groundwork for the higher-level talks next month, Gao added.

On Wednesday, China also announced (link in Chinese) that it will exempt 16 categories of U.S. imports, including some pharmaceuticals and lubricants, from the 25% tariffs China started levying last year in retaliation for similar tariffs imposed by Washington.

U.S. stock indexes saw modest gains amid signs of melting tensions and a rate cut by the European Central Bank. The S&P 500 rose 8.6 points or 0.27% on Thursday, while the Dow Jones was up 0.17% at the close.