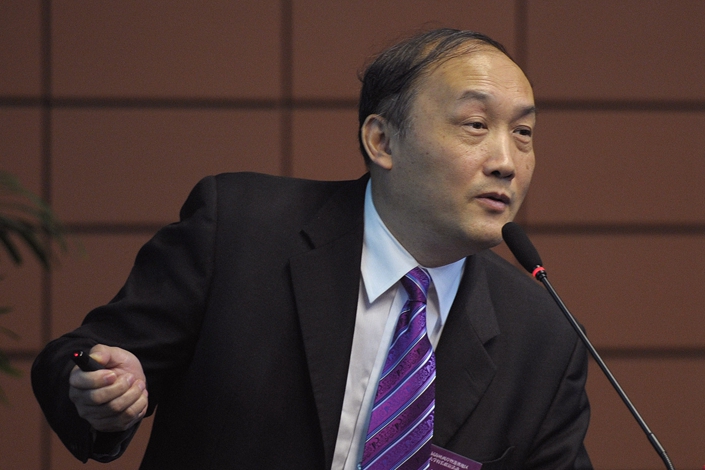 Editor’s note: The following interview has been adapted from the original Chinese text published by The Intellectual, a public WeChat account. It has been edited for brevity and clarity.

Facing competition with the United States in technology, what should Chinese science do? How should we view China’s stage of scientific development and the gap between China’s scientific research and other international giants? Yang Wei, the former director of the National Natural Science Foundation of China and a scholar at the Chinese Academy of Sciences, spoke with The Intellectual about these topics.

Yang said that China’s scientific research has made remarkable progress in multiple disciplines, noting that the number of young scientists and international cooperation have both grown steadily. Still lacking, however, is high-impact research and original work.

Yang, born in 1954, is an engineer. He obtained a doctorate from Brown University in 1984 and then taught at the prestigious Tsinghua University, his alma mater, for nearly two decades. After serving as dean of Zhejiang University in Hangzhou from 2006 to 2013, he became director of the state-backed National Natural Science Foundation of China until 2018, when he returned to Zhejiang University to serve as director of the center for cross-mechanics. He holds a number of positions such as director of the Technical Science Department of the Chinese Academy of Sciences and scientific consultant for the creation of the Beijing National Science and Technology Innovation Center.

The Intellectual: About five years ago, while you were the head of the National Natural Science Foundation of China, you predicted that China’s scientific research papers would improve and reach the middle level of global influence and quality. It’s clear now that China’s scientific research influence has increased. For example, in the first eight months of this year, Chinese scholars had 117 articles published in three major international publications, Cell, Nature, and Science. How do you evaluate China’s progress in basic scientific research? Globally, where does China rank?

Yang Wei: Over the last 10 to 15 years, there has always been a fair amount of criticism of Chinese basic scientific research. The critique has been that there hasn’t been enough improvement. Overall, development has been relatively fast, and it has emerged in four ways.

First, the vast majority of disciplines are in a stage of rapid development. In 2010, China’s academic influence was ranked 10th in the world. The Chinese Academy of Sciences proposed that by the end of the 12th Five-Year Plan period, China could advance to fifth in the world. At that time many people felt this was ambitious, but they actually achieved their goal in 2013, ahead of schedule. The next five-year plan aimed to have China reach second in the world in academic influence, and we achieved this in 2017.

Second, the quality is steadily improving. There is an index to measure the quality of scientific research articles called the “Field Weighted Citation Impact.” The average value of scientific research articles is 1. China’s average was around 0.3-0.4 in 1999, much lower than the world average. Last year, it was 1.02 based on the Scopus database and 1.06 based on the Web of Science database. This shows that the quality of articles in China is increasing as the number of articles increases. The average impact factor can only rise if the citation rate increases faster than the rate of academic output.

Third, young people are coming to the fore. The National Science Foundation has projects that are open to all ages. In 2010, we counted that the peak age of the project hosts was 46 or 47 years old. Now, the age peak is much lower, at 36 or 37 years old.

Fourth, international cooperation has increased. This has been a bottom-up process, not a top-down one — it is not the countries signing agreements to support greater cooperation.

What aspects are lacking in basic scientific research?

Generally, there are few high-impact papers, milestone-hitting research and original work. For example, there have been several milestones as science has developed, but very few have been named after the work of Chinese people. In original works, pioneering works in a branch of science, there are even less.

Now, artificial intelligence is developing rapidly, but if we list 100 important works — such as those cited on Wikipedia — we’d seldom find someone from China. The most famous gene editors in life sciences are seldom Chinese.

In addition, there are several disciplines in which China’s rankings are quite low, and there is a considerable gap with the world’s advanced level. One is space science. In fact, China’s space technology is very strong, but China ranks 13th. Psychology is probably the lowest ranking, at 15th in the world.

To improve the quality of China’s basic scientific research, what should future work focus on?

I think we should support some of the more talented young people to explore freely. We now have a cascade of projects, different types, but personally I think the problem is that we have too many applicants, which means that the proportion of young people getting funding is relatively low.

Many people worry that since China and the U.S. are decoupling in many areas — that the U.S. will try to strangle progress in certain fields. How do you view this? Under the current trend, what should be done?

Decoupling is not necessarily the outcome. Unless the two countries go to war, it is unlikely that Chinese and American scientists will be completely separated.

If the industrial system of a small country is incomplete, the scientific and technological system is incomplete, a big country can stop it from developing further. It is hard to strangle natural resources. For example, the United States could block us from getting their oil, but we could find another solution.

Technology, however, can be cut off. It is divided into high-end and low-end; high-end can strangle low-end. Low-end technology is easier, but to develop to high-end requires a long line of technology and know-how, such as in microelectronics.

We are 10 to 15 years behind in microelectronics. The industry is winner-take-all. That is to say, if your products are slightly inferior, there is no market for you. It is impossible for China to start with the goal of winning. We can only catch up slowly and maintain our own system.

We still haven’t had many breakthroughs in basic research that have resulted in the replacement of an older technology. Some people say that there are no secrets in basic research and papers have been published, but from the publication of papers to the formation of technology, who does it first, who develops the technology fastest, and then who can apply for patents will seal it up for later generations.

Some things we can develop on our own, but some things require cooperation.

So important things, high-end areas that can control many technological developments, should be developed on our own, because China is a big country.

With “Made in China,” we first formed a complete industrial system, and then the added value of our manufacturing industry surpassed that of the United States around 2010. By contrast, China’s science has now basically formed a complete system across disciplines; although a few disciplines are still not up to scratch, we may have more academic output than the United States in 2020. The rise of basic scientific research in China is 10 years later than that of Made in China. We see that China is not yet a manufacturing power; therefore, by 2030, China will not have reached the height of a powerful country in basic scientific research. We hope that China will realize its dream of becoming a powerful country in basic research by 2050.