Editorial: It’s Time to Shift the Focus of Market Regulations 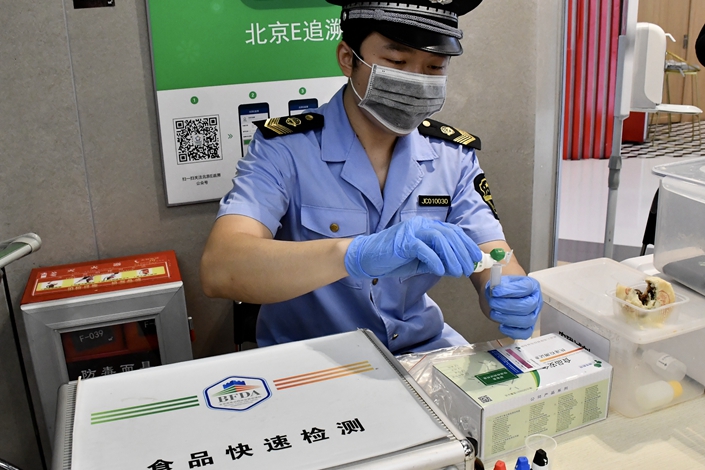 The State Council this month issued a circular on the guidelines for rolling out measures to strengthen government supervision over market entities. One of the most crucial part of document was the pledge: “to shift more administrative resources from prior approvals to proactive and post-supervision.”

The message of the administrative reform is clear: the government will make it easier for companies to get up and running, but it will also watch more closely for any regulatory violations afterward.

Premier Li Keqiang already said in 2016 that government should shift its focus to real-time supervision. In fields such as enterprise investments and business registration, the shift has already taken place. Now, as the governmental reform to streamline administration and delegate powers has been underway for quite a few years, it is time to realize a comprehensive shift of focus in administrative supervision.

Strengthening and standardizing such supervision is at the core of streamlining administration and delegating powers, as well as transforming government functions. The difficulty lies in how to completely get away from the past habit of prior approval, which directly relates to whether the purpose of the circular could be realized, that is, “to promote fair competition with fair supervision, and accelerate establishing a market-oriented, legalized and international business environment.” It is always easier to say something than to put into practice. The reform in administrative supervision will inevitably involve adjustments in governmental institutions and their functions, and it will break down the impediments of vested interests of different departments and local regulators.

Lessons from the international experience have showed us that proactive and post-supervision cannot be separated from public support. Whether by enhancing the role of industry groups and chambers of commerce, or improving the supervisory method of “whistleblowers,” a higher level of social autonomy is what we need to achieve.

Now that the guiding document has been in place, our most urgent task is to tackle resistance, eliminate impediments, unblock the pipelines, and set up the mechanism, so that supervision can truly get on the right track and have an effect. To this end, a clear proposal of a comprehensive shift of focus in supervision is conducive to the transformation of the mindset of officials at all levels, and it will make policymaking and implementation more effective. A few particular fields may need to keep more prior approvals than others, but this should not get in the way of an overall shift of the regulatory focus.

Indeed, it is not easy for that shift to take place. The government has been making an effort to strengthen supervision over the years, and there have been improvements, but the progress is still unsatisfactory in many areas. The widespread outbreak of African swine fever, for instance, should be a wake-up call. The essential reason for the outbreak is the fact that government functions have not transformed thoroughly, and the boundaries between the market, society, and government are still ambiguous. Some departments as well as some local regulators are still trapped in the vicious cycle of wanting to control everything, but nothing was under good enough control.

In addition, the immature self-governance organs in the market-oriented economy have failed to fulfill their roles effectively as market regulators. It is disturbing to see that the trend of self-governance seems to have weakened in recent years, and many organizations have ceased to be active, existing only on paper. This has inevitably made it harder for the government to carry out oversight. Much of the chaos from the regulations closely relates to government lagging reforms in delegating powers. The unclear division of powers will naturally lead to conflict between regulators or loopholes in practice. Some regulatory functions go back and forth, sometimes picked up by the central government, sometimes returned to the local governments. It is a situation that has been mocked as “flipping the pancake,” and it has confused enforcement officials. If the reform of delegating powers continues to lag, it will be also very difficult to shift the regulatory focus from prior approval to proactive and post-supervision.

To push forward this regulatory reform, we should also resolve to get rid of the chaos in current regulations. The “guidelines” did not ignore this issue — the circular contain requirements that aim to tackle the problems in enterprise on-site inspections, including frequency and randomness, to avoid repetitive or unnecessary items in the inspections, and to prevent turning penalties into an income stream for law enforcement agencies. This misbehavior has not only increased the operating costs of enterprises and weakened the vitality of our economy, but also eroded the political atmosphere and encouraged corruption, which brutally damages the business environment. Just one bad experience by companies in this chaos could hurt the image of local governments. Governments at all levels should treat all types of market entities equally, and speed up clearing out rules and regulations that get in the way of forming a unified national market and fair competition.

It is especially important to crack down on excessive local regulatory actions, even to the extreme of going beyond what is allowed under the Administrative License Law. Recent incidents that happened in the field of environmental protection, and bans and limits on raising hogs in some areas, have not only eroded the credibility of local regulators but has also affected the life of our citizens. Dealing with regulation-related misbehavior is one of the most effective protections for the market-oriented economy and our livelihood.

Enhancing the synergy in regulations is another key highlight of the circular. This refers to, first of all, the collaboration and coordination within the government. It means breaking down internal barriers in access, production, circulation and consumption, as cross-departmental and cross-regional regulations and law enforcement will be the future trend. This is not hard to achieve with modern technology, but the key obstacle lies in the conflict of interest between departments and different regions.

The widely existing problem of “isolated information” not only severely restricted the synergy of regulation and law enforcement, but also largely increased the transaction costs of market entities. This situation has improved considerably since the reform to “streamline administration and delegate powers,” but the moves could be bolder. Collaboration should not just linger on the surface, instead, integration of internal mechanisms as well as top-level design of the system should be in place. Otherwise, cross-departmental and cross-regional collaboration can get stuck on a particular detail and not able to move forward.

Collaboration also means forming synergy between market self-discipline, government regulations, and public supervision. Lines in the circular that relate to mechanisms such as “whistle blowing” and internal reporting have attracted close attention from the media, and that’s not unexpected because those methods have always been important when it comes to public oversight. The “guidelines” clearly propose establishing a mechanism for whistle blowing, which is the first time the State Council has ever done so in its documents.

In fact, whistle blowing is not new to China, as the nation has already introduced it back in the old days. By the end of 2013, 31 provinces in China had established systems that reward reporting food safety problems. However, the system did not run smoothly, even when the government promised big rewards, because many whistleblowers did not dare to claim the reward due to concerns about career and personal security, even after making an anonymous report to the authorities.

The key to whether this will work in China will be figuring out how to motivate whistleblowers by improving how to keep their identities confidential and how to support them.

At the same time, it is necessary to identify a clear definition of whistle blowing, in order to prevent the policy from overreaching. There has been a generalized misunderstanding of it as a system on social media to encourage backstabbing, which is something that the government ought to clarify and correct in time.

The regulatory reform is a crucial part in deepening the reforms in government functions, integrating delegation and governance, and improving government services. Pushing for a comprehensive shift of focus in government supervision will fuel such reforms and lessen arbitrary allocation of administrative resources. It will also facilitate the implementation of the guiding document itself. If the shift of focus in market supervision can become a reality, it will undoubtedly be to the benefit of our market-oriented economy, and a great leap forward for the country’s ability to govern.