By Fang Zuwang and Denise Jia 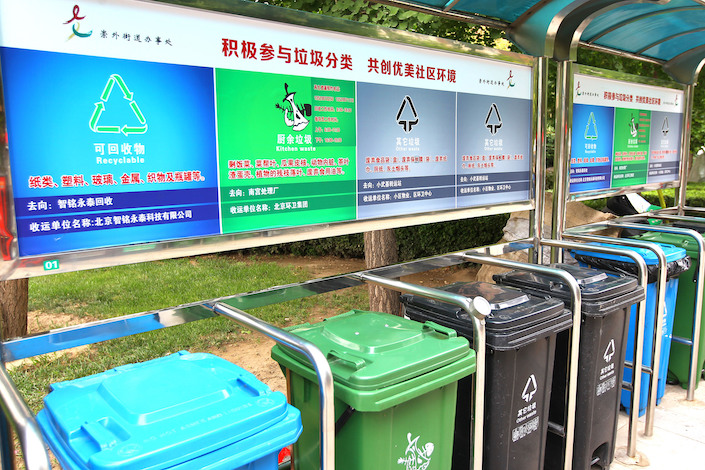 The introduction of compulsory household garbage sorting in China’s two biggest cities could hurt the short-term profits of waste-burning businesses, according to a research report.

If waste-burning companies don’t upgrade their equipment, their business from burning garbage could shrink by 20%, reducing revenue by about 9%, China International Capital Corp. (CICC) estimated in the report.

Since July 1, household waste in Shanghai must be sorted into four categories: wet garbage (household food), dry garbage (residual waste), recyclable waste and hazardous waste. Beijing will follow Shanghai’s lead, though with different garbage classification standards. The State Council, the country’s cabinet, intends for the new garbage classification system to be implemented in 46 cities by 2020.

Incineration is a relatively inexpensive way to dispose of household garbage and creates heat that can generate energy. China now burns about 40% of municipal solid waste, much less than some developed countries. China is also pushing to increase its incineration capacity, aiming to burn 54% of municipal solid waste by 2020, according to a five-year plan set by the congress.

Two months after Shanghai’s implementation of garbage sorting, daily household garbage burning in the city decreased by 26% compared with the end of 2018, state-owned newspaper Economic Daily reported earlier this month.

Part of the revenue of garbage-burning companies comes from waste-disposal fees paid by the government. The average waste disposal fee is 64 yuan ($9) per ton, according to data from Countrywide Federation of Industry and Commerce Environment Chamber of Commerce.

But a bigger part of revenue comes from selling electricity generated from incineration to the state power grid. As the country encourages waste burning for power generation, the government also pays subsidies to these companies for their on-grid power.

Revenue from power sales and government subsidies is 2.7 times that from waste disposal fees, the CICC report shows.

Waste sorting will reduce the total amount of trash available to burn, but separating wet from dry garbage can also improve the caloric value of the waste, meaning each ton of garbage burning can generate more power.

Another report pointed out that the impact of garbage sorting on waste-burning companies will depend on the capacity to dispose of wet garbage.

If the separated wet garbage cannot be properly processed, it will eventually go to waste-burning companies, Everbright Securities Co. said in the report.