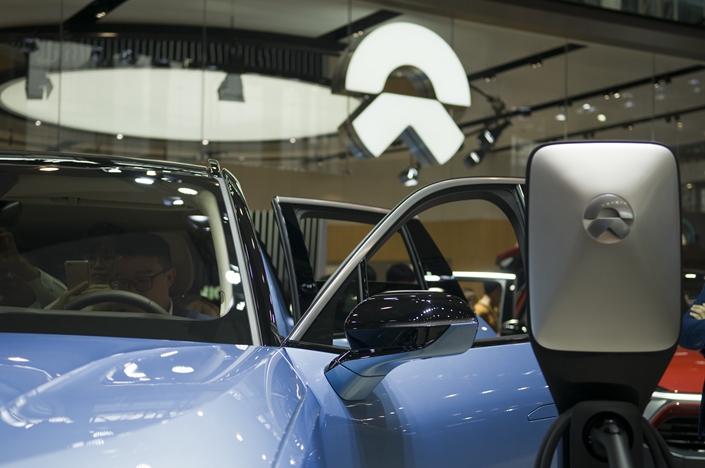 Chinese electric-car maker Nio Inc. continues to feel a chill on its U.S.-listed stock despite a shining performance against a broader market plunge Wednesday.

Nio, which positions itself as a Tesla killer, closed 20.45% higher despite a steep drop in U.S. equity markets. The Dow Jones Industrial Average lost more than 500 points, or 1.86%, after lackluster U.S. employment data deepened recession worries. The decline represented the worst start to a quarter since the 2008 fourth quarter, according to Dow Jones Market Data.

By contrast, Nio surged as much as 25% during the day, rebounding from a week-long decline after it reported worse-than-expected second-quarter losses. However, the stock remains at a historically low level after losing nearly 76% of its market value since last year’s initial public offering.

Nio shares closed at $1.59 Wednesday, compared with its $6.26 IPO price. The stock surged as high as $13.80 in the first week after its New York Stock Exchange debut. The electric-car upstart’s market cap shrank to $1.67 billion from $6.9 billion at the IPO.

Wednesday’s gain may not be enough of a sign of reviving confidence in Nio. The stock dropped 4.4% Thursday morning shortly after trading started. Nio finished the day 3.1% higher at $1.64 Thursday.

Bernstein slashed its estimates for Nio Sept. 30 after the disappointing earnings report, lowering its target stock price to 90 cents from a previous target of $1.70. Chinese brokerage Everbright Securities also downgraded Nio to sell with a target price of $2.02.

Everbright said it has measured Nio in comparison with Tesla and believes the Chinese rival should be around half the value of Tesla. California-based Tesla currently has a market cap of around $42 billion.

Nio started to deliver vehicles last year and has two models on the market. By the end of June, the company sold 18,800 of its flagship ES8 SUVs and 2,883 ES6 SUVs. But a battery fire earlier this year led to a recall of 4,803 ES8 vehicles in June.

The recall also led to slower sales of new cars, Nio said. The company delivered only 837 new vehicles in July, nearly 40% fewer than its average monthly sales of 1,327 during the first quarter. Sales revived in August to 1,943.

Bernstein held a gloomier projection for Nio and said the company will run out of cash shortly after the third quarter this year. Nio said recently that its chief executive William Li and major shareholder Tencent Holdings agreed to purchase $200 million of convertible bonds issued by the company. The bond sales were set to be completed by the end of September, Nio said.

The company borrowed $650 million through a dollar-based convertible bond sale in February and said in May it secured an investment of more than 10 billion yuan from a Beijing-based state enterprise.

Nio had a balance of cash and cash equivalents, restricted cash and short-term investments totaling 3.45 billion yuan as of June 30, the financial report showed.