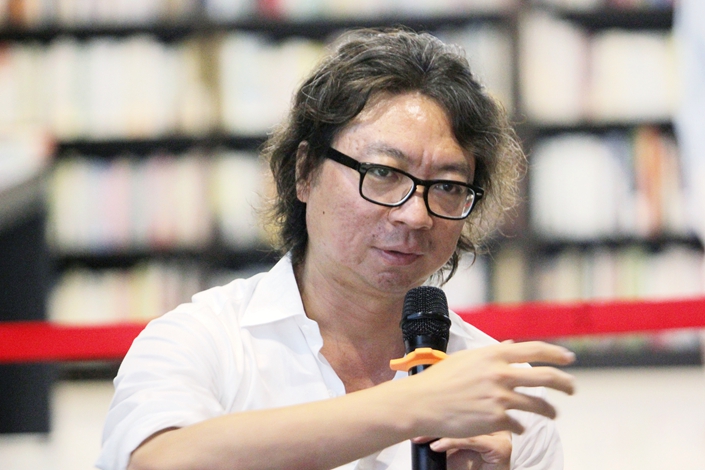 Xu Zhiyuan, author of "Liang Qichao: A Young Reformer," delivers a talk at a bookstore in Wuhan, the capital of East China's Hubei province, on June 29, 2019. Photo: VCG

Last year China celebrated its 40th anniversary of economic reform, which has transformed the nation from an earlier period of central planning to the more market-oriented system we see today. But more than a century earlier, the nation embarked on a far more profound reform in the late years of the Qing Dynasty, attempting to meld traditional Chinese culture and thinking with Western counterparts.

That period is most represented by thinker Kang Youwei, born in 1858, as well as writer Lu Xun, born more than two decades later in 1881. But in between that pair lies Liang Qichao, another well-known reformer whose early life is the subject of a new Chinese book, “Liang Qichao: A Young Reformer (1873-1898).” This new look at Liang comes through the eyes of author Xu Zhiyuan, whose background as a journalist brings a new perspective — with its pros and cons — to this famous historical character.

Born in 1873 to a local scholar in South China’s Guangdong province, Liang Qichao was notable for entering the echelons of thinkers of the time early in his life, including taking an interest in reform at the age of 25. During his travels abroad he met with the likes of President Teddy Roosevelt and banking magnate J.P. Morgan in the U.S. He also met in with philosophers like France’s Henri Bergson, and invited British philosopher Bertrand Russell and American philosopher John Dewey to visit China.

His worldly experience, and ability to put his own life in the context of the many things happening around the globe at that time, led author Xu to write that Liang could “weave his own fate into a broader tapestry of time, including China’s own rise and fall as well as with affairs of global history.”

In penning his book about Liang’s formative years, Xu is like a projectionist, at once writing the report as the main author, while also using Liang as a foil to describe the rapidly changing society around him, including the early challenges of globalization as China was flooded with a wave of foreign influence. In such turbulent times, author Xu seems to find Liang’s world as a place of refuge, a place to go and hide and feel a sense of stability.

The biography is quite ambitious, attempting to portray not only Liang but also the bigger face of rural and urban China at that time. Author Xu hopes to make readers feel as if they’re strolling about a vast landscape, able to see everything from the village where Liang was born in 1873, with its rice paddies, streams and tea plantations; to the Shanghai street in 1897 where Liang co-founded a newspaper with fellow reformists to spread their views.

Some have criticized author Xu for including large sections of direct quotes in the classical Chinese used at that time, making things difficult to understand and affecting the reader’s experience. But that’s the way people wrote and spoke at that time, and translation into the language of today might dilute the flavor of that period.

Author Xu brings many characters into his history. “I tried very hard to restore it to the story of the original people, because in many historical writings, people disappeared,” Xu says. “Then, I was struggling to construct a story across generations. The experience of the earlier or later generations was very different.”

For me as a reader, the most attractive part of “A Young Reformer” was the less apparent connections between people it contained, especially when seeing the occasional familiar names and discovering that person had similar hopes and dreams to Liang’s, and how they influenced one another. Author Xu says: “I hope that everyone can see each person’s separate fate and experience many different feelings. It’s like a stage play, wherever the spotlight shines is center stage. Sometimes it’s on the fringes, sometimes you leave the stage entirely. But after leaving the stage you could still come back.”

Some may also find the book unsatisfying due to its lack of focus, since it aims its lens at so many different people from different angles. But author Xu points out that that Liang’s life wasn’t that exceptional, at least in the first 25 years, and that he was repeatedly unsuccessful and wasn’t taken that seriously during that time. Things would only change later.

As a writer, Xu’s experience in the media industry has also provided him with a unique perspective different from previous authors writing about Chinese history. He pays particular attention to interpersonal relationships, showing copious details that have not been sorted out in previous research on Liang Qichao. Such relationships can influence our understanding of historical characters.

Xu undoubtedly met with numerous difficulties during his writing process. For example, many historical documents and other materials from that period are probably quite opaque and unfamiliar to him, making them difficult to understand. In such cases he could only rely on the research of historical scholars and their interpretations. It’s also difficult to understand some of the historical thinking of that time, for example the world of traditional scholarship of that era and how traditional Chinese scholars saw the collision with Western thought.

But such obstacles don’t get in the way of making “A Young Reformer” a good read, piquing readers’ interest in that period of history and letting them understand the experience, actions and bravery of a group of young thinkers who lived more than a century ago. Especially today, author Xu hopes that reading and experiencing this kind of history “will make us realize that we aren’t isolated and that we are connected. This can become a force to further enrich our current lives.”